3 Reasons Why Bitcoin Dropped Below $51,000 Over The Weekend

An unverified tweet, coupled with a drastic drop in Bitcoin’s total mining hashrate, kicked off cascading liquidations in the crypto derivatives market.

and the broader crypto market saw one of the most gruesome crashes, leading to $9 billion in liquidations. There were three key sources of the negative catalysts.

A drop of 12.3% occurred within 20 minutes, starting at 11:15 pm. Apparently, it was triggered by a tweet sent almost an hour before (ET) that claimed the U.S. Treasury was investigating financial institutions for illicit use of crypto.

Prominent crypto lawyer Jake Chervinsky raised skepticism on the credibility of the news. He stated that the “treasury doesn’t charge money laundering (DOJ does).” Moreover, there are no other reports of the claims.

While the unverified source was the last tipping point, bearish pressure had been building in the market all day.

The Bitcoin mining hashrate dropped by 40% a week after an accident in a Chinese coal mine halted operations in the entire Xinjiang region. The drastic change raised concerns around Chinese dominance over the market, with one region affecting nearly half of the total hashrate.

Last but not least, rumors of a sell-off of COIN shares by Coinbase executives had also weakened the market’s spirits, which was ironically heightened last week for the same reason.

Pseudonymous Twitter account Crypto Randy posted Apr. 17 that the chief product officer and financial officer at the exchange sold nearly all of their shares at launch Wednesday.

However, financial experts have contested those claims and guessed that a mix-up of forms and failure to differentiate between actual shares and options contracts led to the misunderstanding. Eric Yakes, CFA, who brought the issue on Twitter has deleted the tweet. Moreover, experts like Meltem Demirors, CFO at CoinShares, stated that Coinbase executives only hedged their holdings, which is still probably above 90%.

Together, the buildup of negative pressure blew out over the weekend after the suspicious U.S. Treasury report.

The liquidation price of over-leveraged long Bitcoin and altcoins orders, primarily on Binance, was completely wiped out. Traders forced to sell at those prices amplified the sell-off, causing a domino effect on the price.

Over $9 billion, mostly in long orders, were liquidated, with Binance users accounting for nearly 50% of the total amount. Huobi, ByBt, and Okex each recorded over $1 billion in liquidations.

Crypto Market Liquidation Data After The Crash On Apr. 17

The funding rate for perpetual contracts had dropped to lows not seen since the March 2020 crash. The largest-ever liquidation seen since the crash suggests that the worst might be behind.

The “buy the dip” action was also visible in the Coinbase Premium indicator, where the larger difference between spot prices on Coinbase Pro and the derivatives market indicates strong buying action by institutions. 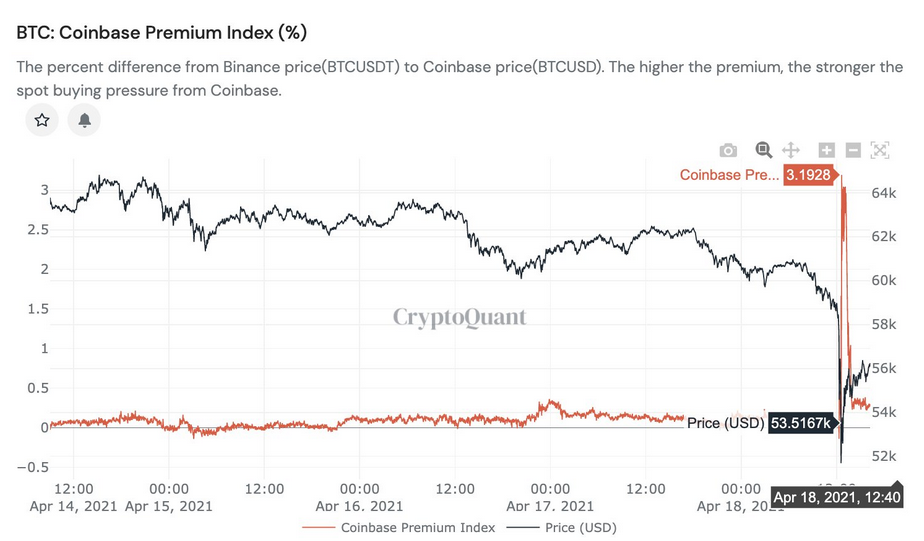 However, the confirmation of the local bottom warrants consolidation above the weekend's lows in the coming days.

The funding rate of Bitcoin perpetual contracts on Binance has retaken a bullish stance—around 50% annual percentage rate—which is a worrying signal in the short-term.

Lastly, if the rumors around the regulatory crackdown are true, it could mark a generational top on Bitcoin.