With down more than 25%, we’re sure there are no few Bitcoin holders wondering if this is the beginning of the end. What we want to point out is that, historically, every time Bitcoin has corrected it has always bounced back to produce mind-bending returns.

Even the 2017/2018 implosion driven by the Chinese regulatory crackdown, a correction that shaved 85% off the price of Bitcoin at its low, bounced back, and look how much BTC has gained since. About 2060%. That’s not something to thumb your nose at.

The point we’re trying to make is that Bitcoin may be down but it’s not out. The correction may deepen but we don’t think so and here are four reasons why.

Four Reasons Why Bitcoin Will Bounce Back Stronger Than Ever

1. Bitcoin Is Still The Dominant Cryptocurrency

Even with Bitcoin’s dominance slipping in recent weeks, it is still the leading cryptocurrency by market cap. Bitcoin, the original cryptocurrency, is worth about 50% of the $1.8 trillion cryptocurrency market and will likely remain #1 for a very long time. At worst, we expect this coin will fall to #2 or roughly equivalent with over time but we also think these two ecosystems can exist side by side.

Where Bitcoin is a very simple (relatively speaking) blockchain network with limited functionality Ethereum is intended to be—and is—a globally-scaled financial supercomputer. Simply put, Bitcoin is digital while Ethereum aims to be the infrastructure of global digital finance. Regardless, interest in both coins will rebound and one will aid the other.

The hash rate, or the amount of computing power available in the Bitcoin network, is down in conjunction with price action and that is not unexpected. The takeaway is that the decline in hash power is in-line with the underlying trend (strongly up) and ready to rebound as it has every other time hashing power has dipped.

One reason we expect a rebound is the difficulty level. With the hash rate down so sharply the difficulty of mining a new Bitcoin is reduced and that will attract miners back into the network. Rising BTC prices will also attract Bitcoin miners back into the network. There may be some volatility in this figure over the next month or two but by the end of the summer BTC hashing power should be back at new highs.

Even with the ongoing mining activity, Bitcoins continue to become scarcer. Not only are BTCs lost every day they are often burned to produce value in other parts of the cryptosphere. At last look, there were about 18.7 million circulating Bitcoins of a total of 21 million Bitcoins possible to mine.

Of those, at least 20% are lost or otherwise irrevocably irretrievable. What this means is that we know where these Bitcoins are, they are in a wallet recorded on the blockchain, but the keys to retrieve them are lost. There is no way to know where the wallet is, who owns it, or even how to get into it. We’re sure you’ve heard the stories. The takeaway, like most commodities the scarcer it is the higher the price.

Bitcoin is in the midst of rapid acceptance by mainstream financial institutions. It’s been slow to build, but over the past two quarters, there have been at least such as Morgan Stanley (NYSE:) and Goldman Sachs (NYSE:) who’ve come out to say they’re offering crypto-services.

Along with this is the roll-out of Bitcoin/Cryptocurrency services by the likes of PayPal (NASDAQ:) that includes pay-with-Bitcoin services for its 300+ million customers and 20+ million merchant clients. And then there is the Coinbase Global (NASDAQ:) IP.

Coinbase is the world’s leading cryptocurrency exchange and it’s only getting more popular.

The price of Bitcoin is trading at a new low right now, but inside a range that we think will produce a bottom. This support range is consistent with prior lows that should produce a strong bounce.

The indicators and price action suggest price may fall a little bit more but, with stochastic so oversold, the rebound may only be days away if not closer. 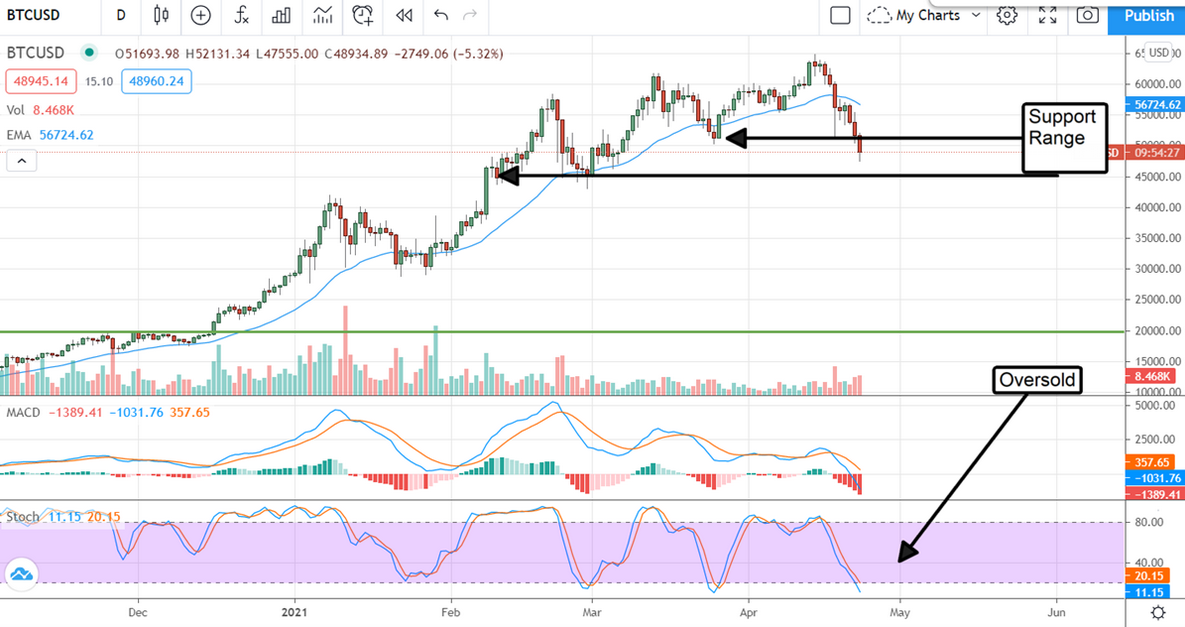