Various markets have seen their trends shift alongside ‘s own changes.

Bitcoin and technology stocks rallied this week, recouping from losses due to rising bond rates. Along with changes in the bond and gold markets and new upcoming stimulus rounds, there are five important macroeconomic movements affecting Bitcoin.

On a global macro-level, Bitcoin’s positive outlook began with the strong resilience against the “reflation trade” in bond markets.

The market can track the reflation trade using the yield curve indicator, which measures the difference between long-term bond yields and short-term contracts. A steeper yield curve indicates the market’s expectations of high inflation in the future.

The bond market’s -yield has tripled from a low of 0.52% in August. Additionally, short-term expectations are still low due to the prevalent effects of COVID-19 shock. Hence, rising yields have threatened to move value away from other assets into bonds. 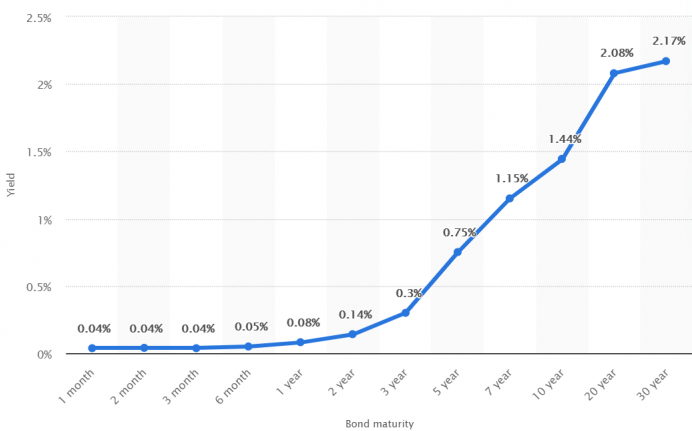 2. The U.S. Stimulus and Inflation

In the United States, the Biden administration is days away from ratifying a third economic stimulus package of $1.9 trillion. The government passed $3.4 trillion worth of stimulus packages in 2020.

The new stimulus round is likely to spark inflationary fears. However, the U.S.dollar has been in an uptrend thanks to the rising yields of long-term bonds. The (DXY) against other fiat currencies broke above the $90.50 resistance on Monday to a high of $92.50. 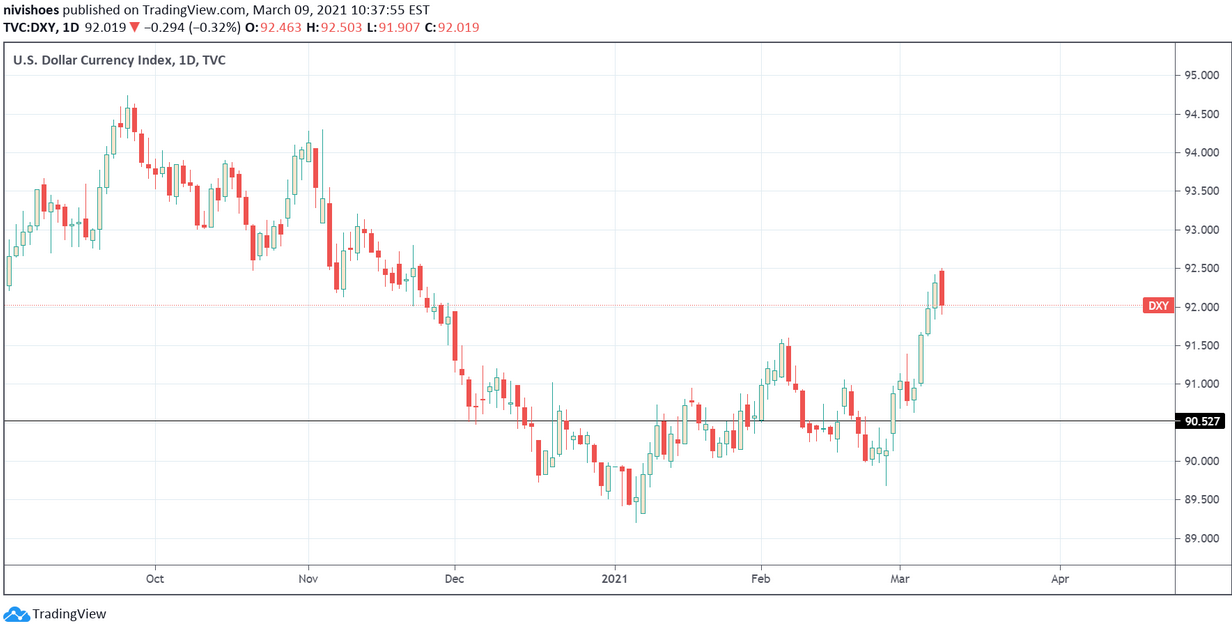 However, DXY corrected on Tuesday morning by 0.28% after bond market sell-offs slowed down. Liquidity is now flowing out from the dollar again, which has restarted the devaluation trade.

Markets have given mixed signals regarding inflation expectations. While bond markets are expecting inflation, the price action of shows no worrying signals.

Gold, the world’s oldest inflationary hedge, has been on a downward trend, losing support at $1790 per ounce to lows of $1675.

Gold’s price action is a reaction to the bond markets and the beginning of the reflationary trade. It represents a market exposed to faster economic growth, price pressures, and higher yields in an attempt to revive from an economic crisis.

Nevertheless, gold prices gained 2% this morning to reach a high of $1720, so there is some reason for optimism.

The correlation between Bitcoin and the stock market increased towards the end of February. The U.S. dollar’s strength from the bond markets hurt stocks and Bitcoin’s value in early March. On Friday, stocks and Bitcoin dropped after Powell’s speech after he took a “dovish” stance towards the rising bond yields.

This morning, the composite index and index were trading in the green along with BTC. NASDAQ’s stock (NASDAQ:) has risen by 9.5% after closing last week at a new all-time high of $149.50.

Bitcoin defied gravity during the reflation narrative. The alpha cryptocurrency has regained $1 trillion market capitalization with a price pushing towards $55,000.

In the absence of a negative catalyst, the uptrend is likely to continue for stocks and Bitcoin. 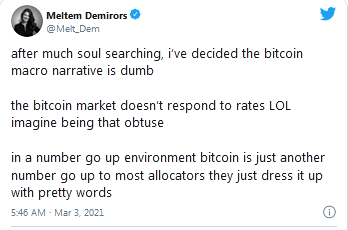 Alex Kruger, an independent analyst, told Crypto Briefing that concerns are unwarranted, noting that “an object can move against the wind for as long as the wind is not too strong.”

According to Kruger, there is more than one force affecting Bitcoin’s price right now. While the short-term movements in bond markets have created a headwind for Bitcoin investment among institutional investors, those forces could be temporary.