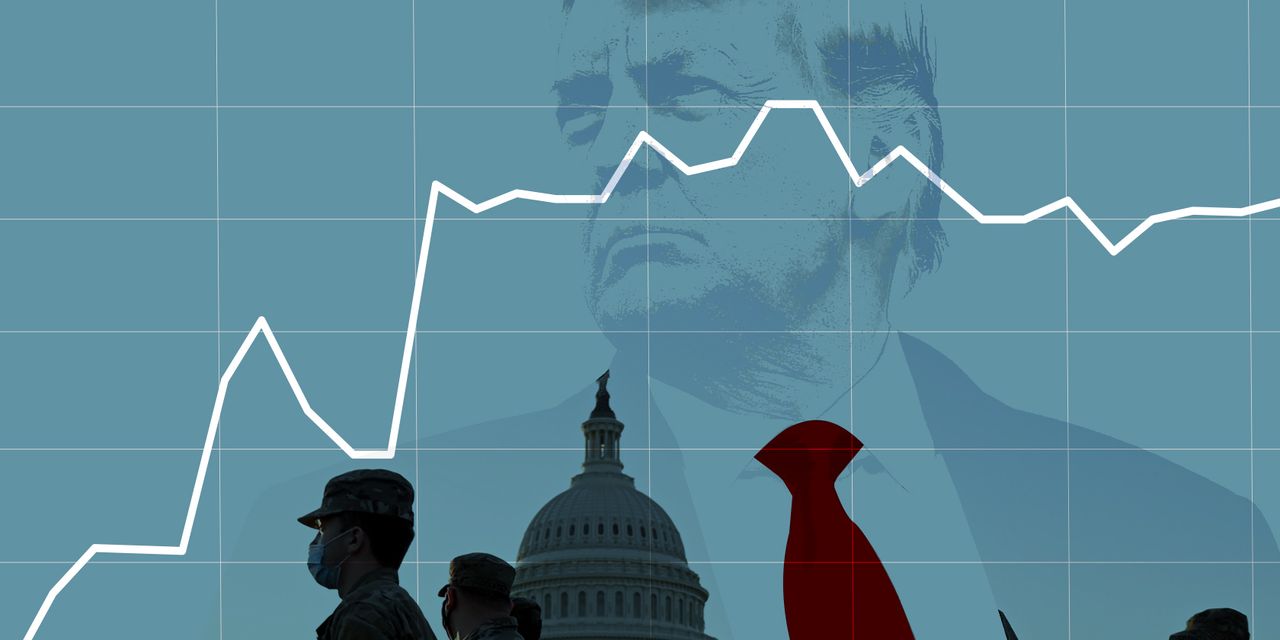 As an unprecedented second impeachment of President Donald Trump looms Wednesday in Congress, market participants appear mostly unperturbed but mindful of what is shaping up to be a historic moment in U.S. politics.

The riots led to the death of five people and raised questions in the U.S. and around the world about the integrity of U.S. democracy and a smooth transfer of presidential power.

House Democrats led by Nancy Pelosi, the Speaker of the House, charge that Trump “willfully made statements that, in context, encouraged—and foreseeably resulted in—lawless action at the Capitol, such as: ‘if you don’t fight like hell you’re not going to have a country anymore.’”

However, market participants continue to voice the opinion that Trump’s impeachment—should it come to pass, or even a conviction in the Senate—are not events that are likely to move financial markets much, unless it impacts the ability of Congress to focus on measures to help the economy emerge from the worst pandemic in over a century.

Fears that Biden’s legislative agenda may be forestalled by the focus on impeachment also could cause some stumbles in what has been a steady climb for equity markets to record highs this month, backed by support from the Federal Reserve and trillions in fiscal relief aid from U.S. government in the past year.

”The impeachment is obviously not a good thing for the country with any president,” said J.J. Kinahan, chief market strategist for TD Ameritrade in a Wednesday interview with MarketWatch. ”But I also think the market is balancing what that [impeachment] means with the new administration coming in and the hopes for new stimulus.”

Biden said Monday he had asked whether the Senate could “bifurcate” its schedule, so impeachment and his agenda could be dealt with simultaneously.

“Can we go half-day on dealing with the impeachment and half-day on getting my people nominated and confirmed in the Senate?” Biden said as he got his second dose of the coronavirus vaccine.

Incoming Senate Majority Leader Chuck Schumer, a New York Democrat, said in a published interview Monday that it is possible to work on both issues at the same time. “We’re going to have to do several things at once but we got to move the agenda as well,” he told the Buffalo News. “Yes, we’ve got to do both.”

Read: Why the stock market rallied even as a violent mob stormed the Capitol

Early Wednesday, stocks were bouncing around, with the Dow Jones Industrial Average
DJIA,

under pressure, while the Nasdaq Compsoite Index
COMP,

showing modest gains and not far from all-time highs.

A successful impeachment in the House sets up a trial in the Senate, which would be historic because compared against Trump’s last impeachment on Dec. 19 of 2019, there is growing view that there may be sufficient movement among Republicans to convict the president in the Senate.

However, the president would likely leave office when Biden is sworn in on Jan. 20 before a trial begins, according to reports.

Some have said that the distraction of the impeachment and possible Senate trial would come at a time when the focus needs to be on the distribution of COVID vaccines and sustaining the economic recovery from the pandemic.

That said, some investors say they are hopeful that Biden can make headway with his plans and believe that the chapter of Trump will come to an end in a week, regardless of impeachment.

”As the building blocks of the Biden administration are well-understood by the market at this point, politics likely are not taking centerstage right now, at least where the market is concerned,” Chris Larkin, managing director, trading and investing product E-TRADE Financial told MarketWatch via email.

”Keep in mind, we’re heading into earnings season where expectations are high. Companies have proven they can drive revenue and growth with lower cost structures due to low borrowing costs, remote work, and reduced travel—so traders are likely eyeing the numbers more closely than what’s happening in Washington,” he said.

”The stock market only cares about the direction of the economy, earnings, interest rates and the actions of the Fed,” said Peter Boockvar, chief investment officer at Bleakley Advisory Group, in emailed comments to MarketWatch.

The two past impeachments where market reaction can be tracked, including Trump’s own, haven’t resulted in major moves in stock prices, according to Dow Jones Market Data.

Bill Clinton was impeached by the House in 1998, alleging obstruction of justice and perjury, linked to testimony. Markets back then finished sharply higher on the day after his impeachment.

No impeachment thus far has led to a Senate conviction and removal of a president from office in U.S. history. However, forcing Trump to leave office might not be the most important aim.

Trump has indicated he may run for president again in 2024, a prospect that many Democrats fear and increasing numbers of Republicans would like to avoid also. If Trump is impeached again by the House and convicted by the required two-thirds supermajority in the Senate, senators could also vote to disqualify him from serving in future federal office, which would take only a simple majority.

—Rob Schroeder contributed to this article

GBP/USD continues to linger around 1.4000 in European morning trade