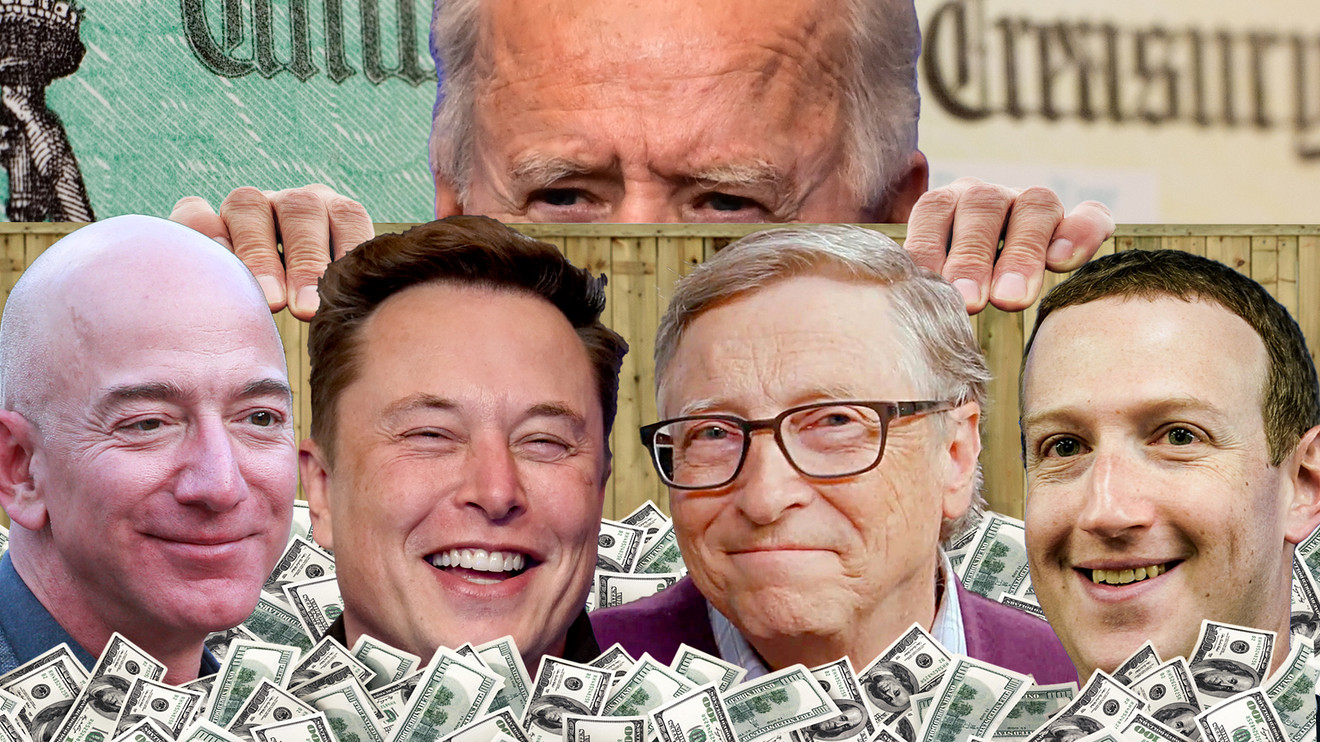 This is rich: America’s billionaires have earned enough money during the pandemic to pay for all of the working family relief in President Joe Biden’s coronavirus response plan.

That’s according to the latest analysis by the Americans for Tax Fairness and the Institute for Policy Studies, which drew on Forbes data to determine that the nation’s 660 billionaires saw their fortunes balloon by a collective $1.1 trillion over the past 10 months.

That windfall covers more than half of Biden’s proposed $1.9 trillion coronavirus relief package, which some Republican lawmakers are calling too expensive as Congress works to negotiate a deal. But it’s enough to fully fund the proposed $1,400 in direct payments to individuals, $400-a-week supplements to unemployment benefits and the expanded child tax credit contained in the relief for working families included in Biden’s stimulus plan, the new report claims.

In fact, the analysis argues that the collective $1.1 trillion gain in wealth that these billionaires have enjoyed since March 18, 2020 could pay out a $3,400 stimulus check for every one of the roughly 331 million people in the United States, or more than $13,000 for a family of four.

The report names a number of tech CEOs in particular, including Amazon’s
AMZN,

Mark Zuckerberg, for enjoying “astonishing increases” in wealth since March 18, 2020 — the date when most federal and state economic restrictions were put in place to prevent the spread of COVID-19, marking the unofficial start to the pandemic in the U.S. That’s also the date when Forbes released its annual billionaires report for 2020, providing a baseline for financial gain over the subsequent months. So on March 18, 2020, the collective net worth of the billionaires in the U.S. was just under $3 trillion dollars; it rose almost 40% to hit $4.1 trillion by Jan. 18, 2021.

Musk’s meteoric rise briefly made him the world’s richest person earlier this month. A year ago, Musk was worth about $27 billion, and barely cracked Bloomberg’s list of the 50 richest people. But Tesla saw its shares spike more than 700% last year, and the company joined the S&P 500 in December following five quarters of positive earnings.

The Bloomberg Billionaires Index reported that the 500 richest people in the world added a record $1.8 trillion to their combined net worth last year.

Most of the 99%, on the other hand, have struggled as businesses have closed and tens of millions of Americans lost their jobs between March 21 and Dec. 26, 2020. One in five renters and one in 10 homeowners reported being behind on their monthly housing payments in December. And the pandemic continues to rage on, with more than 25 million Americans infected by the coronavirus, and over 421,000 killed.

“Billionaires are reaping unseemly windfalls of wealth during the pandemic,” Chuck Collins of the Institute for Policy Studies said in a statement. “They benefit from having their competitors shut down or controlling technologies and services we are all dependent on in this unprecedented time. We should tax these windfall gains to pay for recovery.“

Last month, the Americans for Tax Fairness and the Institute for Policy Studies made the case for these billionaires to give everyone in the country a one-time $3,000 stimulus check. Their latest report draws on updated figures for the number of American billionaires and the size of their bank accounts.

But some skeptics argue that the Americans for Tax Fairness should move the goalposts a bit in determining whether billionaires got richer or not during the pandemic. For example, MarketWatch’s Steve Goldstein suggests looking at billionaires’ performance beginning with the Feb. 19, 2020 peak in the market, which wipes out a few hundred billion dollars of their gains — although Musk and Bezos still end up as pretty big winners.

And it should also be noted that many billionaires have donated to coronavirus relief efforts. Bezos gave $50 million last year to All In WA, a coalition of community leaders supporting workers and families affected by the pandemic, for example. He also pledged $10 billion to fight climate change, and gave the first $791 million to environmental groups in November.

Bill Gates has also pledged to spend “billions” on coronavirus vaccines and treatments. And Swiss bank UBS reported in October that 209 billionaires had given a collective $7.2 billion between March and June 2020 to fight COVID-19.