Optimistic Rollup solution Arbitrum is hoping to lower gas fees and make DeFi on accessible to all.

Scalability has been Ethereum’s biggest challenge as its popularity rises. One of the key Layer 2 solutions hoping to solve the issue, Arbitrum, has now launched for developers.

The Road To Scaling Ethereum

During the recent market crash on May 19, when and ETH both plummeted over 30% in a day, gas prices reached as high as . Some DeFi users reported Uniswap transactions costing upwards of $1,000. Miners earned a record $110 million during the day from gas fees.

The explanation behind these high prices is simple. For a transaction to be committed to Ethereum, the user must incentivize miners to include the transaction in their block by adding a tip. Miners select the highest tips available and include them in priority in their blocks to ensure the most profitability from their transactions.

Ethereum has a low throughput, focusing on security and decentralization over efficiency. While this wasn’t a particularly pressing issue in its early years, the rise in the price of ETH and increasing demand for transactions have led to high dollar values for any transaction on the blockchain.

As the above graph shows, transaction fees have recently become the main source of revenue for miners ahead of the block rewards received after every block mined. The small throughput of the chain and high demand have led to high gas fees, which have driven DeFi users to other Layer 1 platforms like Binance Smart Chain and Polygon.

The solution to these issues is to increase the throughput of the chain. To do so, there are two options. One of them is to scale the blockchain’s base layer. This is what Ethereum 2.0 is working on through sharding, which will split the on-chain workload horizontally between 64 shard chains while still benefitting from the security of the entire network.

The second option is to move part of the operations off-chain, on a second layer built on top of Layer 1, while leveraging its security. While Ethereum processes around 15 transactions per second (tx/s), Layer 2 could increase throughput to 2,000-4,000 tx/s. The higher the throughput, the lower the gas prices should be.

This is the vision Ethereum founder Vitalik Buterin presented in his October 2020 piece ‘A rollup-centric ethereum roadmap,’ which described the future of the Ethereum chain and the role rollups could play. He wrote:

“The Ethereum ecosystem is likely to be all-in on rollups (plus some plasma and channels) as a scaling strategy for the near and mid-term future.”

How Rollups Will Help Ethereum Scale

Layer 2 is a general term that refers to a variety of solutions that help increase the capabilities of a blockchain by carrying transactions off-chain while still retaining the security of Layer 1. Examples of scaling solutions include Bitcoin’s Lightning Network. Users lock up their funds and execute any number of trades between themselves, only necessitating one final transaction to be given to the main chain.

Another type of solution is Plasma, which works by offloading transactions to child chains. Polygon uses Plasma. However, the issue with it lies in bringing the funds back to the main chain; a transaction can last hours. Sidechains like xDai are independent, compatible chains that decentralized apps can port their smart contracts onto to relieve pressure from the main chain.

That transaction is a type of zero-knowledge proof called a SNARK, which stands for “succinct non-interactive argument of knowledge.” A SNARK is a form of proof where one actor can prove possession of certain information without revealing said information. 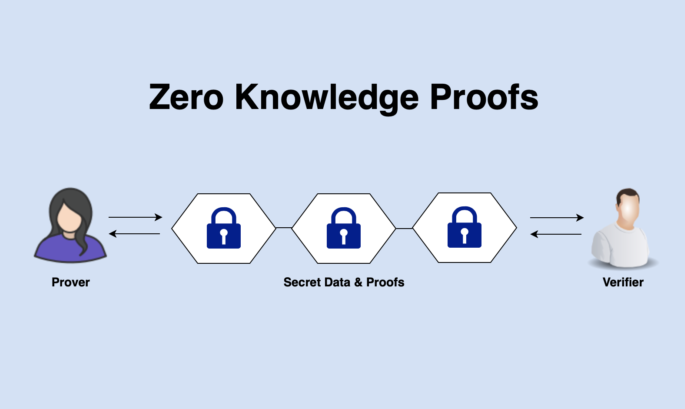 Zero-knowledge proofs are the most efficient way of scaling Ethereum and the one Buterin put forward as the best option for the near to mid-term future. Rollups are divided into two subcategories, zk-Rollups and Optimism. While zk-Rollups are faster, they’re not easily compatible with Ethereum smart contracts. Optimistic Rollups like Arbitrum allow decentralized apps to port their smart contracts with very minimal changes.

In the long run, zk-Rollups could be a more appealing option for decentralized apps as the technology evolves but, in the immediate future, Optimistic Rollups are much more realistic. Two projects are working on Optimistic Rollups with two products that will be battling for market share in the near future: Optimism and Arbitrum.

Optimism has met some delays in the past few months, pushing the release date for their public mainnet to July, while Arbitrum launched on Saturday.

Uniswap’s highly anticipated v3 update launched a few weeks ago with a planned release on Optimism, but delays have led the community to propose a release on Arbitrum as well. The vote received widespread support, and Uniswap founder Hayden Adams has confirmed the most popular decentralized exchange would deploy its smart contracts on Arbitrum. 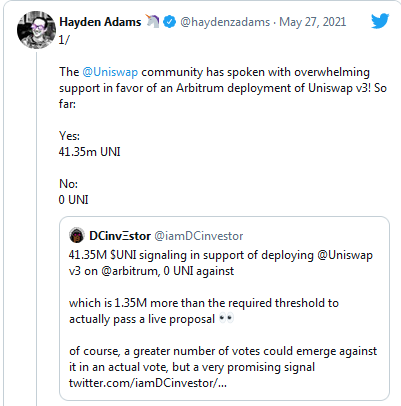 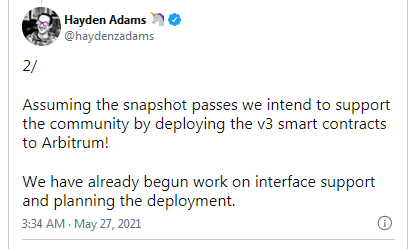 A successful Uniswap launch on Arbitrum would bring a high amount of liquidity to their solution compared to Optimism. Adams confirmed that Uniswap v3 would also launch on Optimism as planned. Synthetix, Ethereum’s leading synthetic assets protocol, is also currently testing a beta version of Optimism. Arbitrum uses ChainLink to secure the connection between on-chain smart contracts and off-chain resources, paying for these services with tokens.

How Will Arbitrum Benefit Ethereum Users?

DeFi users will be able to trade on the Arbitrum version of popular decentralized apps like Uniswap for a few cents with faster transaction speed. The implications of the Arbitrum launch don’t stop there.

Offloading a significant amount of transaction volume off-chain will have ripple effects on the Ethereum network. At the moment, Uniswap is one of the biggest gas consumers on the market. If that volume leaves the main chain, the rest of the transaction will also pay significantly less in gas fees. 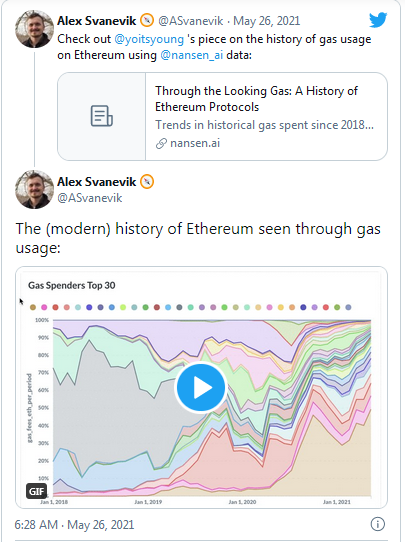 The existence of Layer 2 scaling solutions relieves pressure from the main chain. This benefits gas prices for traders on both sides, lowering transaction fees for everyone.

It’s important to note that rollups are a complex and experimental technology, meaning that the launch of Arbitrum will certainly not be without issues. Only traffic, time, and attacks will help create the perfect Layer 2 scaling for Ethereum.