Ben Lilly says that ‘s recent drop had been on the horizon since February. He also thinks it will be take some time for the uptrend to resume.

The slump in the crypto market continues. Bitcoin’s price fell below $35,000 to lows of $32,150 this morning. It’s now down 7.6% this week and only 12.5% higher than its yearly opening at $28,900. In an interview with Jarvis Labs analyst Ben Lilly, Crypto Briefing attempts to understand the underlying dynamics that have moved since last year and what may lie ahead for the asset.

To understand the noise, there is on-chain data that can help identify trends. Jarvis Labs has designed several on-chain models that help them spot short and long-term trends. They deploy AI techniques and trading bots to identify the leading players in the market. Their meticulous analysis reveals that there is always a phase gap or time-lapse before a trend plays.

The dominant players in any trading niche are market makers. They sustain the market’s liquidity by constantly buying and selling to capture spreads in the order book. Market makers often change their strategies according to the market conditions. Usually, their strategy involves low-risk income opportunities from the premiums paid by retail traders on crypto-related products—for instance, the premium arbitrage trade of Grayscale shares.

There are other categories of metaphorical fish in any market ecosystem. The most important among them are whales: the large investors with deep pockets. Then there are market movers, otherwise known as sharks. Market movers are active traders and investors who feed on the weaknesses of the market. Finally, there is the market itself: the ocean, which consists of all other investors in the ecosystem. When Crypto Briefing spoke to Jarvis Labs analyst Ben Lilly, he started the conversation by explaining how market movers have impacted the rest of the ecosystem.

“The most influential market movers appear to be tied not necessarily to one another, but with the media,” he explained. “Tracking specific wallets and their movements can often help us anticipate news drops or regulatory announcements. This is a bit of a change from what we saw in 2018 when pods of whales were more common.”

Bitcoin is trading at around $32,150 today—roughly 50% off its all-time high. According to Lilly, the recent drop is the result of sharks “attacking the softness in the market that was building up from whales and miners selling.” The weakness in the market can be traced back to late February when the demand for Bitcoin started to slow.

Lilly added that the early stage of the bull cycle through late 2020 and early 2021 was heavily focused on the spot market. “In late 2020, it was all about the spot market,” he said. “This is why we saw such incredible price action that spilled over into 2021. But with this price action came some larger players unloading some of their Bitcoin. This is a normal activity.”

“The demand in the spot market slowed a bit, and we saw the derivatives market take over once again. This was on full display, with spreads in the futures market expanding to more than 40%. With this spread, larger firms began to allocate capital towards this spread. It’s a great trade as firms can hold a neutral position relative to price and capture that 40%+ spread. The trade-off was capital was no longer being used to buy bitcoin, buy altcoins, or any other instrument. It was being used to capture this spread. This contributed to the market losing upside momentum.” 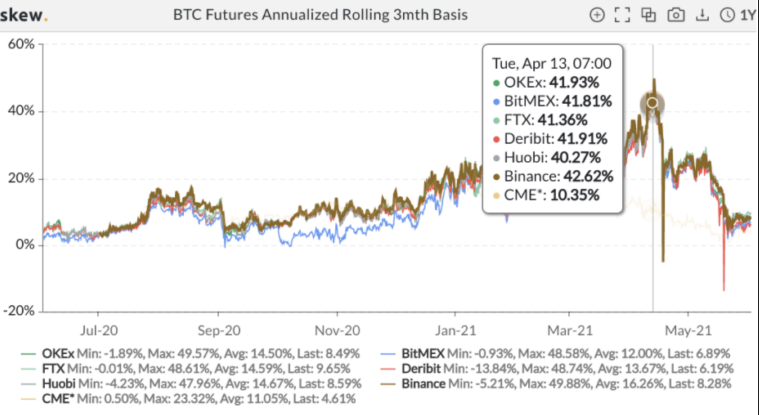 Lilly added that the peak in open interest on futures matched the peak in the spread. As whales began to distribute their capital, the spot market lost some of its strength.

“A telltale sign this was taking place was the rising amount of capital being used in the futures market,” he said. “Note how the peak in Open Interest pairs up with the peak in the spread. So in Q2, we had the spot market losing a bit of momentum with whales distributing and more and more capital getting tied up into a trade, taking advantage of the market getting overheated through more shorting. Eventually, these spreads compressed, and the momentum shifted to the downside.” 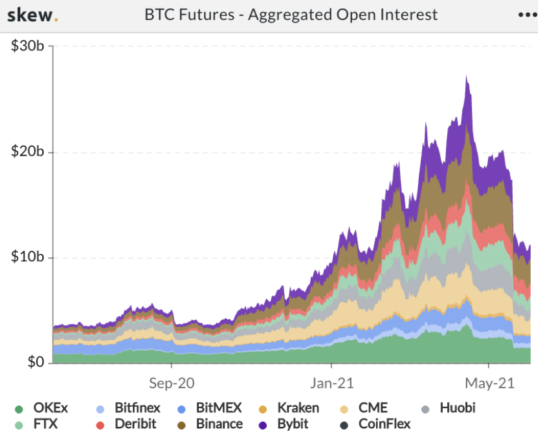 The market suffered a particularly hard blow throughout May. On May 12, Elon Musk revealed that Tesla (NASDAQ:) would stop accepting Bitcoin payments citing environmental concerns. China also doubled down on mining bans and pledged that it would tighten crypto regulations.

The worst blow came on May 19 when three self-regulatory organizations in China clarifying the country’s stance on cryptocurrencies, reiterating bans from 2013 and 2017 that blocked payments services from offering crypto services and ICOs. On the same day, it was revealed that Inner Mongolia had set up a hotline for reporting Bitcoin miners (the region had banned mining in April). Bitcoin’s price dropped 30% to lows of $30,000 from $42,800. This was when the market movers struck to initiate the downtrend, Lilly says.

“It’s important to note a lot of these inflows were not just a one-off from the ban,” he explained. “We saw miners selling more coins than they generated since May 5, well before the selloff. But what’s interesting is with this drop, we had multiple areas of crypto involved in selling. Miners were one group. We also had market movers taking part.”

Lilly added that Binance is generally the dominant exchange market movers and miners use for selling, adding that “the most recent selloff was no exception.” Although there was some activity in other China-friendly exchanges following the miner ban, the selloffs paled in comparison to Binance. Jarvis Labs recorded significant inflows from market movers they had tracked before and during the crash.

Is the Bull Market Over?

Since the selloffs, many crypto enthusiasts have begun to ask “Is the bull market over?” Lilly pointed out that as spreads have returned to near neutral, the spot market could be due for an uplift. He said:

“Now here we are with virtually neutral spreads. This means it is now time for the spot market to gain momentum for another run higher. It’ll take a bit of time.”

The institutional inflows of Q2 2020 have certainly dried out in 2021. Tesla, Ruffer, and many others have booked profits from their BTC investment above $50,000. Grayscale’s demand has also decreased with premiums mostly in the negative since February. Still, Lilly is mildly optimistic about the return of premiums and Grayscale getting an ETF approval. He added:

“The end of unlockings in 2020 created an immense amount of new GBTC shares in the market. This fresh injection of supply takes time to get eaten up. And to be honest, it’s taken longer than I expected. An excellent way to think of this is like a halving event. It takes a bit of time before the drop in new supply issuance impacts price.”

He also said that it will be some time before the new equilibrium works itself out, explaining that the recent drop sped the process up, and “acted as a rest for the Trust.” He added that when the discount moves closer to a premium, “the impact GBTC has on spot prices is likely to return as private investors accumulate BTC on the spot to allocate towards the Trust.”

Lilly also shared his thoughts on the second-largest cryptocurrency by market cap, Ethereum. He commented on the blockchain’s strengthening narrative among institutional investors and key players in the traditional finance world. Ethereum futures went live on CME Group (NASDAQ:) in February, while data shows that whales have been accumulating ETH. “I don’t see this slowing down,” Lilly said.

Lilly added that he thinks it “makes more sense” to many investors in the traditional finance space to invest in ETH over BTC. He said:

“I know I’m flying against the wind on this one, but if you reside in traditional finance and understand the dance regulators and Bitcoin are having, the “threat” Ethereum poses to the is less. Which is not to say Bitcoin is in trouble or anything like that. Ethereum is just less.”

Lilly expanded on his thesis by explaining that Ethereum’s network effect is one of its key strengths. Ethereum has long established itself as the home of DeFi and NFTs this year, with billions of dollars in value locked across protocols like Aave, Uniswap, and MakerDAO. He added that while Bitcoin acts as a competitor to traditional currencies, Ethereum could complement a government’s plans, explaining:

“[Ethereum] is expanding further into traditional FinTech channels than Bitcoin. To me, this is something I’ve heard from investing professionals that view the asset as having more use cases from a financial plumbing point of view. It’s not competing as a currency like Bitcoin is. Ethereum acts more like a facilitator to a country’s global agenda, not as a competitor.”

Lilly also pointed out that Ethereum has EIP-1559, its highly anticipated “ETH buyback” fee burning proposal, on the horizon. EIP-1559, due to ship on Jul. 14, could make ETH a deflationary asset if the network sees enough activity. Lilly said that he expects Ethereum’s investment narrative to grow “in the coming months” as EIP-1559 approaches.

In conclusion, crypto’s bullish and bearish phases in the last two quarters have highlighted the rising and falling in demand since Q2 2020. Consolidation is likely to begin among whales and market movers in a comparatively stable price range. Moreover, these inflows and the eventual break-out will take time to develop.