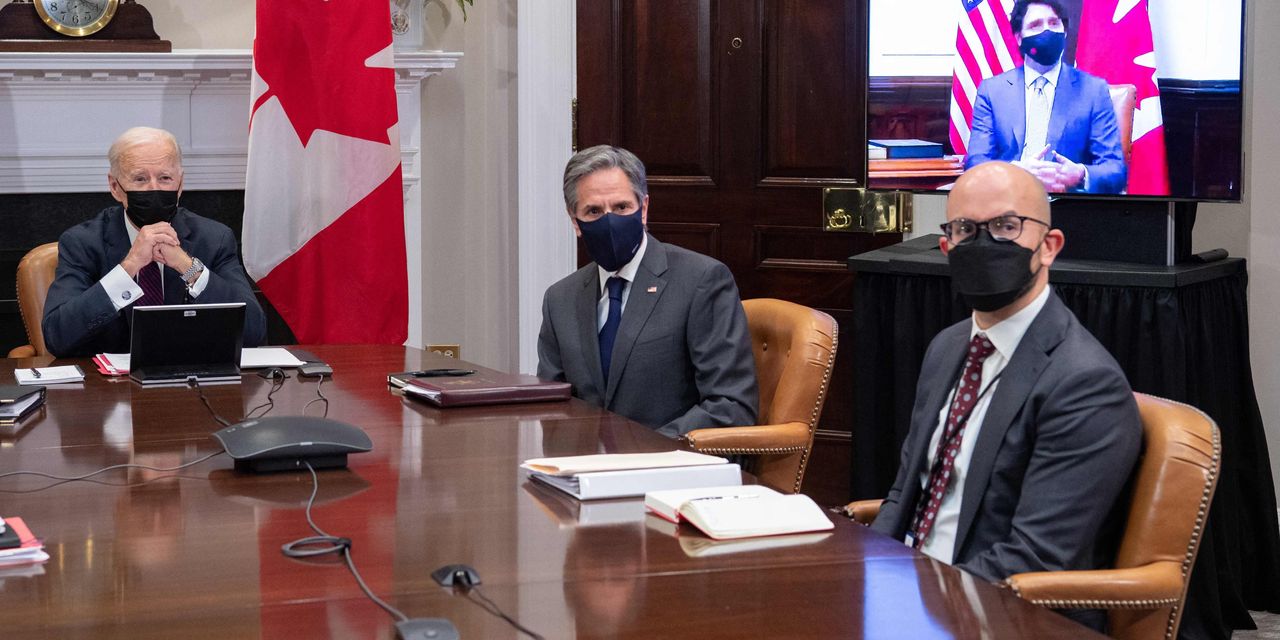 President Joe Biden unveiled a new “roadmap” with Canada during his meeting Tuesday with Prime Minister Justin Trudeau, as the two allies agreed to cooperate on combating the coronavirus pandemic and climate change.

The meeting was Biden’s first bilateral meeting with a foreign leader as president. The two leaders made brief remarks at the opening of the meeting, which was held virtually due to the pandemic.

“I look forward to seeing you in person in the future,” Biden said, reading from an iPad. “The United States has no closer friend than Canada,” the president told Trudeau, according to a White House pool report.

Trudeau said Canada was excited to be working with the U.S. again on climate change and told Biden, “U.S. leadership has been sorely missed over the past years.”

The White House called Biden’s roadmap Biden “a blueprint for our whole-of-government relationship, based on our shared values and commitment to work in partnership on areas of mutual concern, such as the recovery from COVID-19 and global health security, efforts to combat climate change and shared priorities in defense and security.”

It was unclear if Trudeau again raised with Biden the idea of allowing Canada to buy vaccines from a Pfizer
PFE,

plant in Michigan — an issue the Canadian leader brought up last month, according to the Associated Press. Biden for now remains focused on first inoculating the U.S. population, the AP cited a senior administration official as saying.

White House press secretary Jen Psaki told reporters at an afternoon briefing she didn’t anticipate Biden giving Trudeau assurances about getting those vaccines during the meeting, but “all options are on the table down the road.”

In a statement, Trudeau’s office said the leaders discussed how the pandemic “will not end until everyone, everywhere has access to a vaccine” and “the importance of avoiding measures that may constrain the critical trade and supply-chain security between our countries.”

It was also unclear if Trudeau brought up Biden’s “Buy American” executive order, which is designed to encourage the U.S. government to spend more procurement dollars to boost American factories and hiring. As the AP writes, the issue is crucial to Canada since the U.S. accounts for around 75% of its exports. Psaki said she didn’t expect Biden to make commitments on the issue at the meeting.

Now see: All of President Biden’s key executive orders — in one chart

The two leaders are announce a strengthened commitment to the Paris Climate Agreement and a concerted effort towards reaching net-zero carbon emissions by 2050.

Biden also spoke out for the first time against China’s detention of two Canadians, apparently in retaliation for Canada’s arrest of a Huawei executive. “Human beings are not bartering chips,” Biden said. “We are going to work together until their safe return.”

Also read: ‘Pittsburgh can’t win the day without Paris, or vice versa’ — these mayors are allies not foes on climate change

Biden’s decision to revoke approval for the Canada-to-U.S. Keystone oil pipeline rankled Canadian leaders. But Biden is unlikely to change his mind on the issue, which was among his first executive orders.

eked out gains in the final hour of trade Tuesday, while the tech-heavy Nasdaq Composite
COMP,