Biden has ‘big stake’ in California’s recall election, as he campaigns there for Newsom 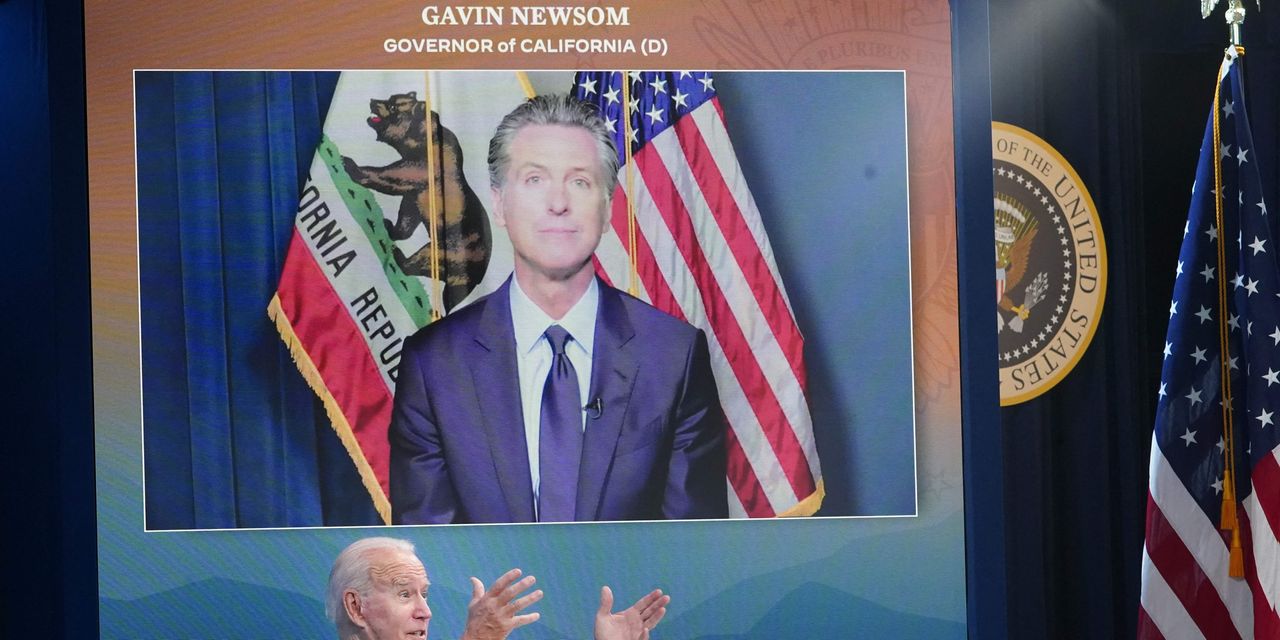 President Joe Biden is due to make a speech on Monday night at a campaign rally for California Gov. Gavin Newsom, as he aims to help a fellow Democrat just hours before polls open in the state’s recall election.

The California contest has national implications as next year’s midterm elections loom, according to some analysts.

“If Newsom lost heavily blue California, Democrats would lose all momentum for the midterms,” said Larry Sabato, director of the University of Virginia’s Center for Politics.

“Fundraising would be much more difficult. Recriminations would consume a lot of the party’s energy. And if anything happens to Senator Feinstein, a Republican would take her place and the entire Biden Democratic agenda in Congress would go down the tubes,” Sabato told MarketWatch in an email, in a reference to Democratic Sen. Dianne Feinstein of California, who is 88, and the Senate’s 50-50 split.

“Biden has a big stake in defeating Newsom’s recall,” he said.

Polling in recent weeks has favored Newsom after not looking as good for the incumbent governor earlier in the year. About 57% of voters support not removing him from office as of Monday vs. 41.2% who want him removed, according a RealClearPolitics average of polls.

While Newsom is expected to win, the margin of victory could be important, according to Stifel’s chief Washington policy strategist, Brian Gardner.

If the governor’s margin is under 10 points, that “could be a sign of voters’ frustration with Democrats and reinforce the anxiety that some moderate Democrats might be feeling about the 2022 midterm elections,” Gardner said in a note. That “could in turn impact how these lawmakers vote on the infrastructure
PAVE,

A Democratic loss in California’s recall election — or in Virginia’s gubernatorial race in November — “could induce outright panic” for the party, Gardner added.

The recall election is viewed in large part as a referendum on Newsom’s policies during the COVID-19 pandemic. His leading opponent, Republican candidate Larry Elder, has blasted those policies as having unnecessarily hurt business owners and others.

So the White House is paying attention to the California race especially after Biden’s new vaccine mandates for millions of workers, according to Kim Monk, an analyst and managing director at Capital Alpha Partners. The White House likely hopes that Biden’s move on vaccine mandates will boost his political fortunes similar to what happened for Newsom, she wrote in a note.

“Newsom’s polling improved considerably as he took additional steps against the virus, so tomorrow’s election could be telling for the WH,” Monk said.

Full results for California’s recall election may not come until days after polls have closed, given the widespread use of mail-in ballots.