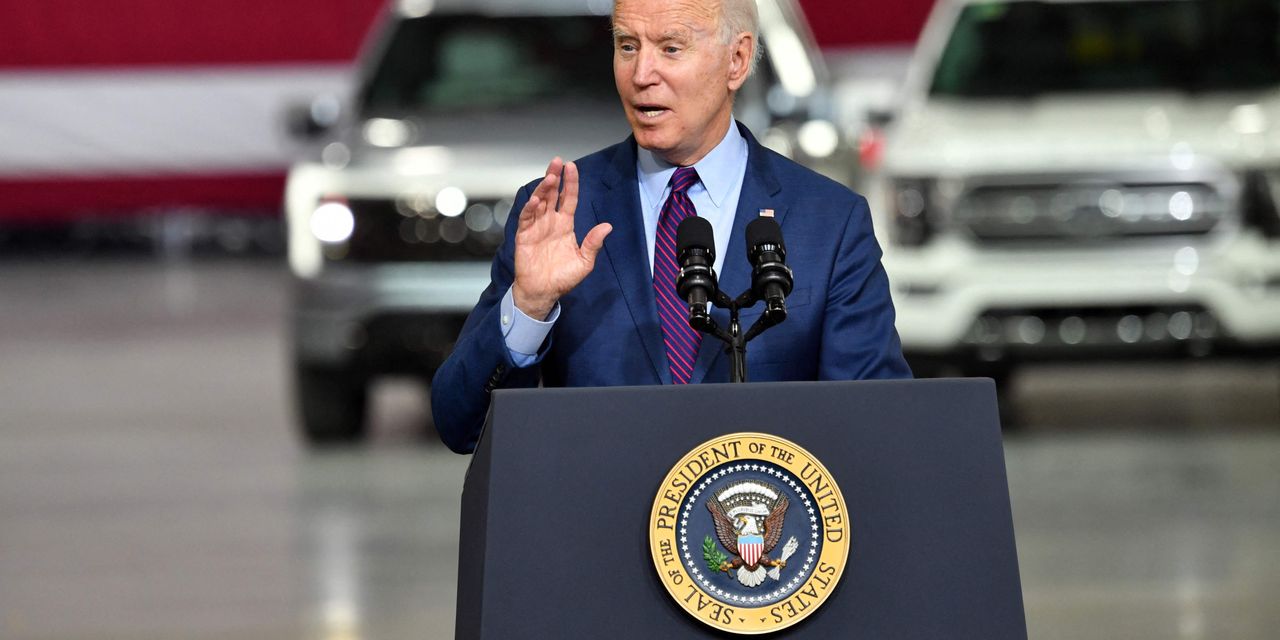 President Joe Biden on Tuesday touted his electric-vehicle and infrastructure plans in a visit to a Ford Motor Co. plant in Michigan, framing his proposals as giving the U.S. a competitive edge against China.

Biden has proposed $174 billion for electric vehicles as part of his $2.3 trillion infrastructure package, a measure he is negotiating with Republican lawmakers. The president’s plan would, for example, build 500,000 EV charging stations.

Citing China’s fast-growing electric-vehicle market and its manufacturing of batteries, Biden said, “They think they are going to win.”

“But I got news for them, they will not win this race. We can’t let them,” the president said at Ford’s
F,

Rouge Electric Vehicle Center in Dearborn. While at the facility Biden got a look at the F-150 Lightning, an electric version of Ford’s popular pickup slated to go on sale next year.

A White House document released before Biden’s departure for Michigan painted the U.S. as in need of catching up in the EV space, particularly to China.

“Despite pioneering the technology, the United States is behind in the race to manufacture these vehicles and the batteries that go in them,” it said, adding the U.S. market share of EV sales is one third the size of the Chinese EV market. China had about 800,000 charging points in 2020, compared to 100,000 in the U.S., the document said.

“President Biden believes it is time for this to change and for the U.S. to lead in EV manufacturing, infrastructure, deployment and innovation,” the White House said.

When asked Tuesday about Ford’s efforts to lobby Washington on issues such as EVs, White House press secretary Jen Psaki told reporters she “would say to any skeptics — anyone who’s questioning why we’re investing in the electric vehicle markets or why the president’s proposing that — that’s where jobs are, that’s where the future of auto manufacturing is.”

Opinion: Green jobs are the wave of the future

Biden met last week with a small group of Republican senators who have proposed a smaller infrastructure plan than his. In his remarks at the plant, he said he and Vice President Kamala Harris believe the administration and Republicans can reach a bipartisan deal. But he repeated, “doing nothing is not an option.”

Senate Republicans could unveil a new infrastructure proposal as early as Tuesday, a Reuters report said.

Senior officials from the Biden administration were due to talk with lawmakers on Tuesday in Washington, Psaki said. “We expect there to be ongoing engagements — follow-up conversations, but that is also happening today,” she said.

See: Biden rolls out $2.3 trillion infrastructure plan: ‘It’s bold, yes, and we can get it done’

were trading lower Tuesday afternoon, as investors digested a strong round of earnings from major retailers against weaker-than-expected housing data.

MarketWatch’s Rachel Beals and Victor Reklaitis contributed to this report.