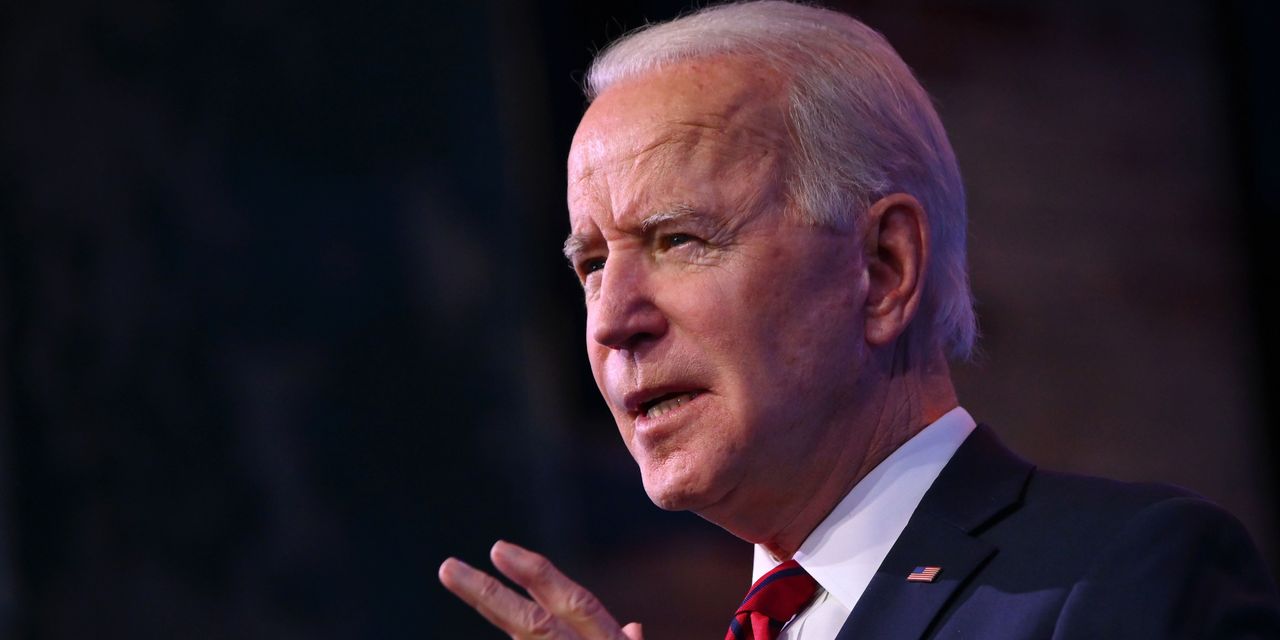 As Americans hunker down and wait to get vaccinated, the toll of the coronavirus pandemic keeps rising.

Its costs, both in lives and livelihood, prompted President-elect Joe Biden on Thursday to propose another $1.9 trillion “first step” spending package to help combat the carnage of the pandemic, even before he takes office next week.

But as Washington gears up to debate another big relief initiative, hand-wringing on Wall Street has already begun as investors worry the bull-market for stocks could be threatened by an economy that might overheat and cause borrowing costs to rise, while also potentially saddling the U.S. with unsustainable debts.

“It’s a tug of war,” said Bryce Doty, senior portfolio manager at Sit Investment Associates, in Minneapolis. “The current situation is horrible, but six months ahead, we hope a lot more people will be vaccinated.”

Equity markets have largely looked beyond this winter’s dire chapter of soaring COVID-19 infection rates and deaths, and the resumption of lockdowns across swaths of the U.S., Europe and China. The focus instead has been on the vaccine rollout and expectations for the incoming Biden administration to secure more funding from Congress to bridge the economy through the coronavirus crisis.

Biden pointed to a “crisis of deep human suffering” on Thursday that is “in plain sight,” while urging Congress, soon to be controlled by Democrats, to authorize $1 trillion to get another $1,400 in direct payments to households, as well as $440 billion to reeling small businesses and $20 billion to speed up what he called a “dismal failure” of the national vaccination program.

If passed, total spending from Congress in the past year on coronavirus aid would reach $4.8 trillion, plus the Federal Reserve’s huge monetary stimulus and bond- buying program that’s expanded its balance sheet to about $7.3 trillion from $4.2 trillion as of last February, writes MarketWatch columnist Michael Brush.

“On the one hand, you have investors worrying about the Fed pulling back from stimulus, while the Biden administration wants to throw a ton more stimulus at the pandemic,” Doty told MarketWatch. “But the more Biden’s stimulus packs a punch, the sooner the Fed will start pulling back.”

Powell also said the Fed wants to avoid “people losing the lives they’ve made” because of the pandemic.

The Biden administration plans to act fast to provide relief where it’s needed most. Top priorities include dramatically ramping up vaccinations, helping hard-hit restaurants feed the hungry, and getting K-8 grade schools to safely reopen.

“We will have to move heaven and earth,” Biden said of his goal to get 100 million vaccinated against COVID-19 in his first 100 days in office, as well as his broader rescue plan that some view as a “lifeline” that can’t come a moment too soon.

Laura Veldkamp, a professor of finance at Columbia University’s business school, compared money spent to bolster the U.S. economy to investment decisions made in the business world.

“If a U.S. company went on a huge spending spree on low-value projects, it wouldn’t remain solvent for long,” she told MarketWatch. But if a company opts to instead invest in valuable projects, particularly at today’s low rates, it likely will thrive, she said.

“A lot of spending on COVID, that’s super high-value,” Veldkamp said. But she also sees the potential risk the Biden plan carries for markets. “We are in a position where there’s a lot of money in circulation,” she said, warning that could spark inflation and future Fed interest rate hikes, which would lift rates above today’s near-zero range.

“But I don’t think we should let marginalized communities suffer,” she said, pointing to investor fears of rate hikes that become a possibility “at some point” down the road, particularly since two, prior rounds of fiscal stimulus already have been coursing through the economy, “and we still have really, really low inflation.”

Minneapolis Fed President Neel Kashkari on Friday said there’s little risk of inflating shooting way above 2%, but that even if it does, the Fed has tools to deal with it.

Investors have been concerned about being blindsided by any changes in the Fed’s current easy-money policies, but more so this month as 10-year Treasury yields
TMUBMUSD10Y,

U.S. stocks closed lower for the week on Friday, as investors balanced worries about the potential for Biden’s rescue plan to be partially paid for through higher taxes, including for corporations that could weigh on earnings, against hopes that giving households and businesses additional aid would spell a stronger economic rebound.

Even with a robust vaccine rollout planned for the months ahead, that doesn’t necessarily mean highflying technology stocks that charged higher in during the pandemic are doomed to see prices fall, particularly as more people have gotten comfortable shopping online, working from home and investing in greener companies.

“The areas that Biden will emphasize have had good moves already,” said Rhys Williams, chief investment officer at Spouting Rock Asset Management, in Bryn Mawr, Pa., speaking of renewable energy plays, but also stocks that could see a boost from Biden’s digital infrastructure plans. “I think they still belong in a portfolio.”

have been on a tear for months, and ended Friday up another 17.1% so far in January, while hydrogen fuel cell company Plug Power Inc .
PLUG,

shares were up 77.4% on the year to date, according to FactSet data.

ended Friday up 14.9% on the year to date, while Stitch Fix Inc.
SFIX,
,
a personal styling platform for clothes, ended 25.8% higher over the same stretch.

Kent Insley, chief investment officer of Tiedemann Advisors, said he’s been focused on single-family home investments, either in the debt or equity space, even before Biden on Thursday promised to bolster not only renters, but mom-and-pop landlords through the remainder of the pandemic.

He pointed to the dearth of building in homes that’s occurred in the dozen years since the global financial crisis.

U.S. stocks and the bond market are closed Monday for the Martin Luther King Jr. Day, but markets will tune into Biden’s inauguration on Wednesday, as well as an update from the National Association of Home Builders. On Thursday, weekly initial jobless benefit claims will be the focus, as well as more housing data, followed Friday by manufacturing data and existing home sales for December.