Like any politician worth their polyester suit, they’re master negotiators. And rarely do negotiators get everything on their first attempt. Aiming high, however, means that the middle ground will be far more enticing, thanks to an optimistic ask.

Many experts suspect this is precisely what the Biden administration is doing.

Still, the mere idea of a hefty bump in the United States’ income and capital gains taxes has already sent investors running. The dropped 0.9% on the news, trailing behind many high-growth tech stocks. Tesla (NASDAQ:), arguably this cycle’s biggest winner, dropped nearly 3%.

Crypto was no different. Both Bitcoin and Ethereum shed a portion of their Q1 gains. Neither asset nor the broader market has fully recovered yet either.

Long-term holders are unfazed by the news. And for those interested in putting their diamond hands to the test, this week’s to-do list offers readers three ways to earn interest in staking their .

On Thursday, market participants were throttled by news that the Biden administration sought to nearly double the capital gains tax in the United States. Specifically, the proposal would draw a higher percentage from citizens earning more than $1 million.

Capital gains taxes are those that investors pay on the profit made from selling assets. There are both short- and long-term capital gains, with the longer-term tax being much lower. The rules can vary from country to country and state to state.

The current capital gains tax rate for America’s wealthy individuals is 20%. If one throws in the additional 3.8% tax which funds Obamacare, the President’s new plan would bump the new rate to a whopping 43.4%. This hike would be the first of its kind since 1993.

A unique market environment has, however, called for unique solutions. Just as the government has been working hard to curb the economic woes of a pandemic, it now needs to collect on all that money printing. Mati Greenspan of Quantum Economics told Crypto Briefing that:

“Though some Congressman seem to be warming up to digital assets, the government as a whole seems to be less excited about the gains being made in all risky markets and are now looking to enforce a bigger cut for government programs. Bitcoin was invented exactly for this reason.”

As the proposal has yet to hit the Senate floor, investors quickly scooped up their gains from this cycle’s heady bull run. Cashing in now means locking in the current tax rate, regardless of the proposal’s viability.

In this sense, the selling pressure likely comes from a demographic that does not have a long-term thesis behind their investments. That, or they don’t expect their favorite growth stocks to continue growing.

There are other derivative effects of the tax proposal beyond rotating out of tech stocks and crypto. With higher taxes in the United States, some pundits have said that talent will flow elsewhere.

Ong, however, reminds that “Silicon Valley is still located in the United States,” adding:

“With higher capital gains tax, some capital will probably flow out to other countries but it remains to be seen whether that is a good enough reason for talent to move. Though this might be irrelevant to crypto-investors as the majority of them do not have physical offices and work remotely.”

Biden’s tax plan has sparked discussions not only around long-term bets and talent flight but also one of the oldest trades in finance. Cash-strapped investors not interested in liquidating their assets may use those assets as collateral to take out loans. This move does not activate any additional taxes.

Various lending and borrowing services suddenly look much more interesting. While many users are only interested in the high yields offered by lending assets, few retail investors have thought deeply about borrowing against their holdings. This strategy may soon enjoy more popularity given the latest tax plan.

The managing partner and co-founder of Nexo, Antoni Trenchev, has even suggested that Biden’s plan may even be “a strategic prelude to pro-crypto legislation in the U.S.”

Nexo lets qualified users put up collateral on 18 different cryptocurrencies and earn a direct line of credit linked to their bank. With over $12 billion in assets under management, Trenchev said that Biden’s proposal might boost that figure “should his proposal to raise taxes for wealthy investors go through.”

“Several DeFi lending protocols have seen great adoption such as MakerDao, Compound, and Aave. A new-comer, Alchemix has made a splash recently by introducing self-payable loans without the risk of getting liquidated. I do foresee more DeFi users being more comfortable with taking loans, and now with the high capital gain tax, there are even more reasons to use it.“

On the night of Apr. 17, the crypto market witnessed an intense crash taking out Bitcoin dropped 14% to lows around $51,000 as altcoins took a deeper dive.

Despite the relief rally to $55,000 earlier last week, Bitcoin’s price failed to overcome resistance from the 50-day moving average.

Nonetheless, the price was edging close to the exit price of traders betting on higher prices. 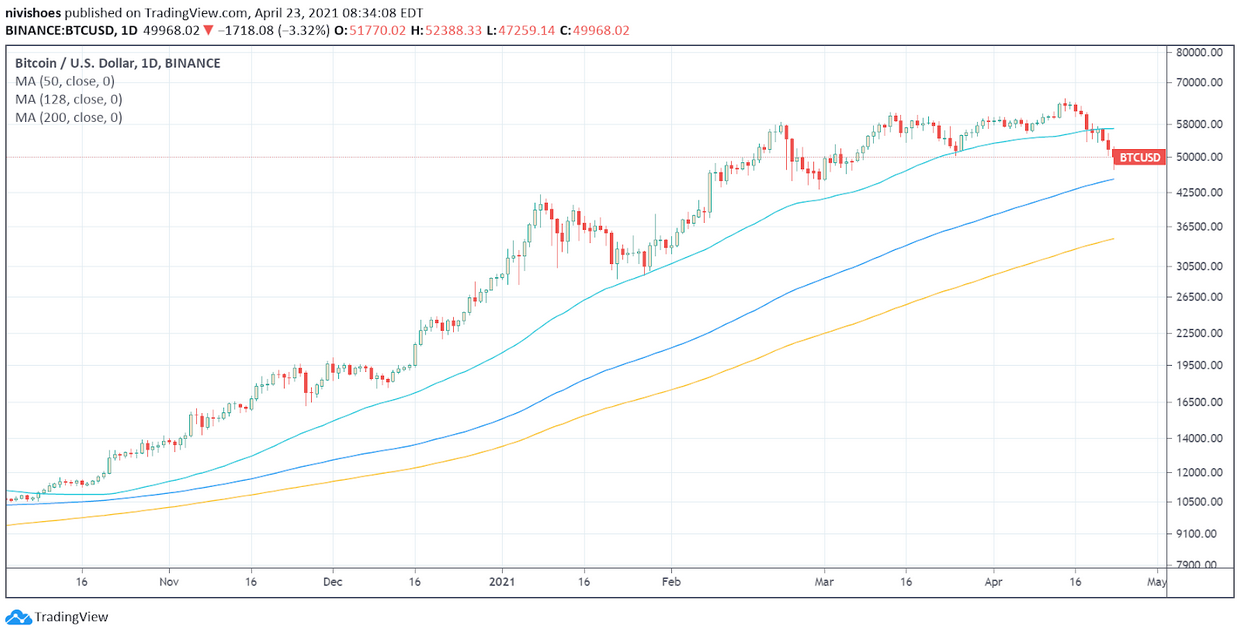 Moreover, there was a crucial difference between the previous weeks’ flash crash and Thursday’s 8.6% drop. On Thursday, the liquidation on the futures and swap market was only around $3.5 billion.

The lower volume of liquidations suggests that spot selling was responsible for the downward pressure, further hurting the probability of a pull-back.

For the first time in this bull market, the CME futures quotes are also in backwardation. The futures price of July’s contracts was trading at $49,000, lower than the rate for May and June.

The funding rate for futures and swaps on crypto exchanges was neutral.

Funding Rate For Futures And Swaps On Crypto Exchanges

The monthly expiration of $2.5 billion in options contracts is due this week. The maximum pain point for option contract buyers is $56,000.

Ethereum’s native asset has recorded a higher high consecutively for the last four weeks. Last week the price reached an all-time high of $2,650.

The market has shown a stronger affinity for ETH rather than BTC. The ratio between surpassed the yearly high of 0.0462 BTC, a level not seen since August 2018.

However, the ETH/BTC ratio dropped below the peak the previous week, facing resistance at that point. The middle and support of the parallel range were at 0.0395 BTC and 0.034 BTC. 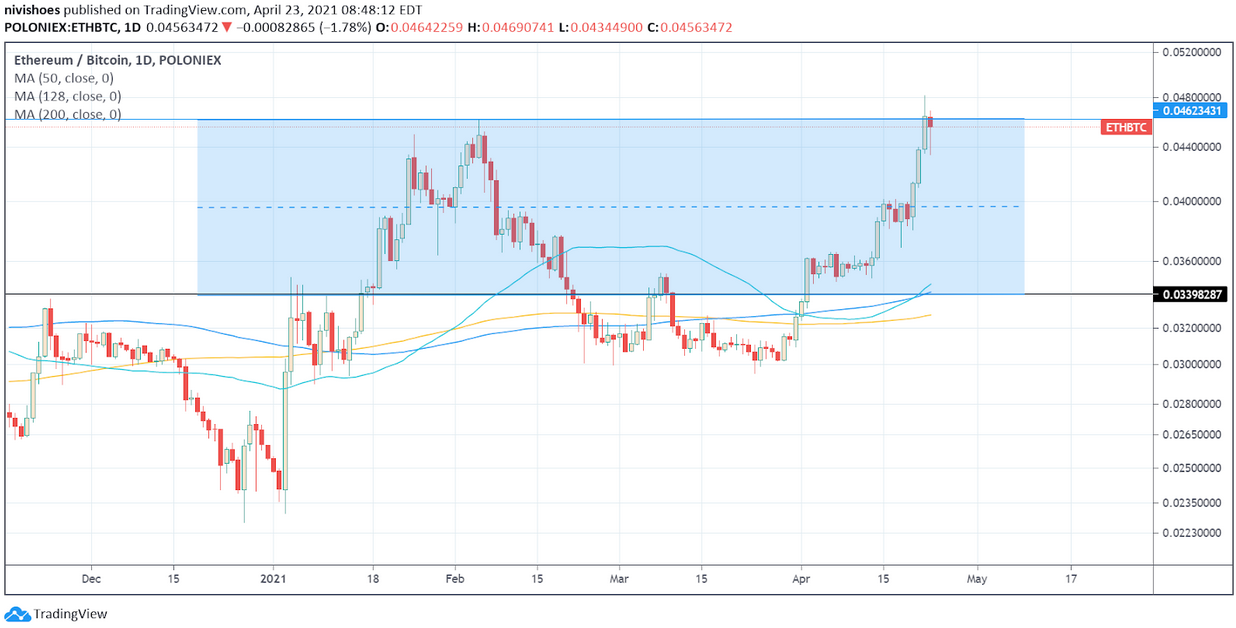 The options market, a proxy for institutional investors, also showed a higher penchant for Ethereum than Bitcoin. 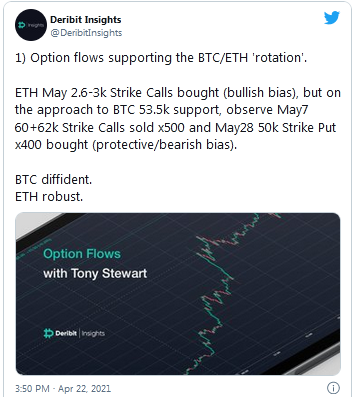 Ethereum demands 13.8% of the crypto market’s dominance, while Bitcoin continues to lead the market at 49.1%, according to CoinGecko data. The beta value of Ethereum is still high.

The beta value is the number of times the price of ETH changes concerning Bitcoin’s rise or fall. Therefore, continued correction in Bitcoin threatens to drag ETH below $2,000 as well. If the downfall continues, previous lows of $1,950 and $1,550 will act as support.

There are now over 4 million ETH staked in the ETH 2.0 deposit contract. Ethereum’s Proof-of-Stake upgrade has been anticipated for years, with recent signs suggesting that it could ship before the end of 2021.

With Ethereum 2.0 on the horizon, many services have emerged, offering ETH holders a way to participate in staking. This list outlines some of the best options for readers.

The most popular way to take part in staking is by depositing ETH directly into Ethereum’s deposit contract. Relying purely on the user rather than a third party, this is the most decentralized approach to validating the network.

However, several big drawbacks may not appeal to everyone.

Most importantly, staking directly through the contract requires 32 ETH. At today’s prices, that’s an outlay of about $73,000. There’s also a hardware cost, though a decent computer or ramp upgrade is relatively inexpensive compared to the ETH itself.

Staking independently also requires some degree of technical expertise. Stakers need to run an ETH 2.0 client, which must be downloaded. Once downloaded, the 32 ETH must be sent to the contract as one transaction.

As ever with crypto, any funds lost through mistakes are not recoverable.

Independent stakers also need to be aware of slashing, which can mean losing a portion of their holdings if their validator node breaks the network rules. In reality, slashing should only affect those who deliberately misbehave.

Staked ETH also gets locked up until Phase 1.5 of Serenity. In other words, if the price of ETH surges and stakers want to sell, they must wait.

According to Justin Drake’s estimates, staking could go live before the end of the year.

With 4 million ETH locked in the contract, rewards are currently around 7.8% APR.

Rocket Pool describes itself as a “decentralized Ethereum 2.0 staking protocol.”

As the name suggests, it works by pooling ETH to stake rather than requiring users to stake the full 32 ETH. Instead, users need only deposit 0.01 ETH to participate in staking (Rocket Pool also allows deposits of 16 ETH to run independent nodes.)

The rETH token can also be used for across DeFi, allowing stakers to maximize the yield earned on their holdings.

Unlike the ETH 2.0 deposit contract, there’s no minimum lockup period. 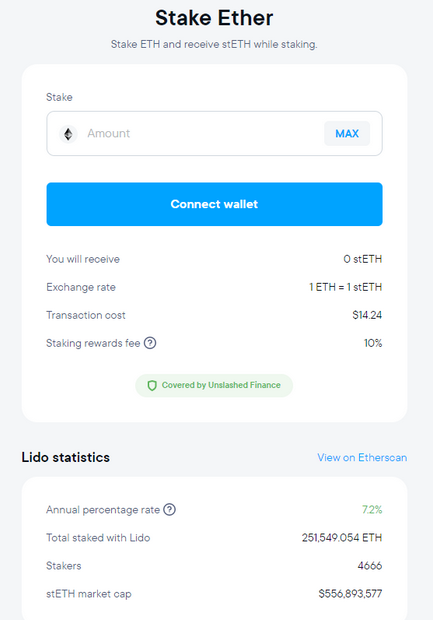 Lido is also integrated through , , and . These integrations mean that users can stake the derivative stETH on these platforms for additional yield.

At the time of writing, Lido had received 251,549 ETH, making it one of the most popular staking services. Factoring in Lido’s fee, the current reward rate is 7.2% APR.

is another service that operates a similar model to other staking pools. When users deposit ETH, they receive aETH in a 1:1 ratio plus any future staking rewards.

Stakers can redeem rewards ahead of Proof-of-Stake shipping and before the end of the staking lockup period.

The rewards earned vary depending on the pool the tokens are deposited in. 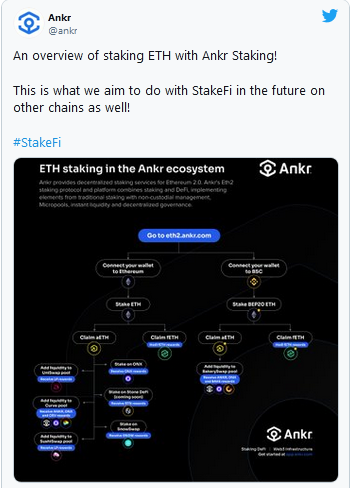 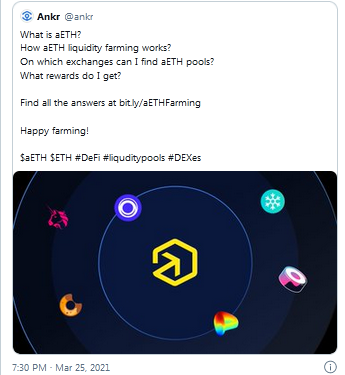 Overall, staking is one of many ways to earn yields in DeFi. With Ethereum’s Proof-of-Stake upgrade on the way, there are now many ways to earn from staking ETH. While running an independent validator node is by far the most popular option, it carries several risks.

It’s important to note that many independent validators have greater than 32 ETH, so their risk factor is somewhat lower.

Nonetheless, caution is advised when participating in any staking activities.

Earnings yields through established protocols like or simply holding ETH in a cold wallet to benefit from its potential price upside arguably carries less risk while still giving Ethereum believers a chance to capture the network’s upside potential.