Binance has managed to capture the market's attention after the spike in Binance Smart Chain's popularity and BNB's explosive price action.

Speculation mounts around Binance as some believe it could become the world’s leading settlement layer. However, new research reveals high centralization levels in Binance Smart Chain, which might affect ’s price action.

Binance’s native token, BNB, has enjoyed an impressive bull rally since the beginning of the year. The utility token has posted year-to-date returns of over 1,600%, going from $37.40 to a new all-time high of $640.50.

As speculation mounts, large investors have been adding more tokens to their portfolios. On-chain data shows that a significant number of addresses with millions of dollars in BNB, colloquially known as “whales,” have joined the network over the past two months.

The rising number of Binance Coin whales may seem insignificant at first glance. However, seeing as these whales hold between $60 million and $600 million in BNB, the sudden spike in buying pressure could translate into millions of dollars.

The increasing demand for Binance Coin has been fueled by the success of Binance Smart Chain (BSC). Transaction volumes have tripled those on the blockchain, making some industry leaders believe this protocol will become the world’s main settlement layer.

Despite the hype around BNB, a recent report reveals high centralization levels among the 21 BSC validators.

According to Ryan Watkins, senior research analyst at Messari, each BSC validator seems to be “some way connected or tied to Binance.” The way every new block is produced shows that validators take turns in a “seemingly predefined order.”

Such behavior leads Watkins to believe that there isn’t any “stake-weighted mechanism” running on the Binance protocol.

“The reason why BSC is faster and more scalable is not because of some magical technological innovation. No, it’s instead the magic of centralization. BSC is an Ethereum fork with a centralized validator set. That’s it. Nothing more,” said Watkins.

Even though cheap and faster transactions have made BSC undoubtedly preferable, the lack of censorship resistance may come at a higher cost.

Binance Coin seems to be preparing for a retracement following its recent rise to new all-time highs.

The Tom DeMark (TD) Sequential indicator currently presents sell signals in the form of green nine candlesticks on BNB’s 1-day, 12-hour, and 4-hour chart. The emergence of these bearish formations across multiple timeframes is quite pessimistic for this cryptocurrency’s near-term price action.

If validated, Binance Coin could enter a one to four daily candlesticks correction before the uptrend resumes. Breaking below the $540 support level could push the utility token toward the next interest areas at $450 or $380. 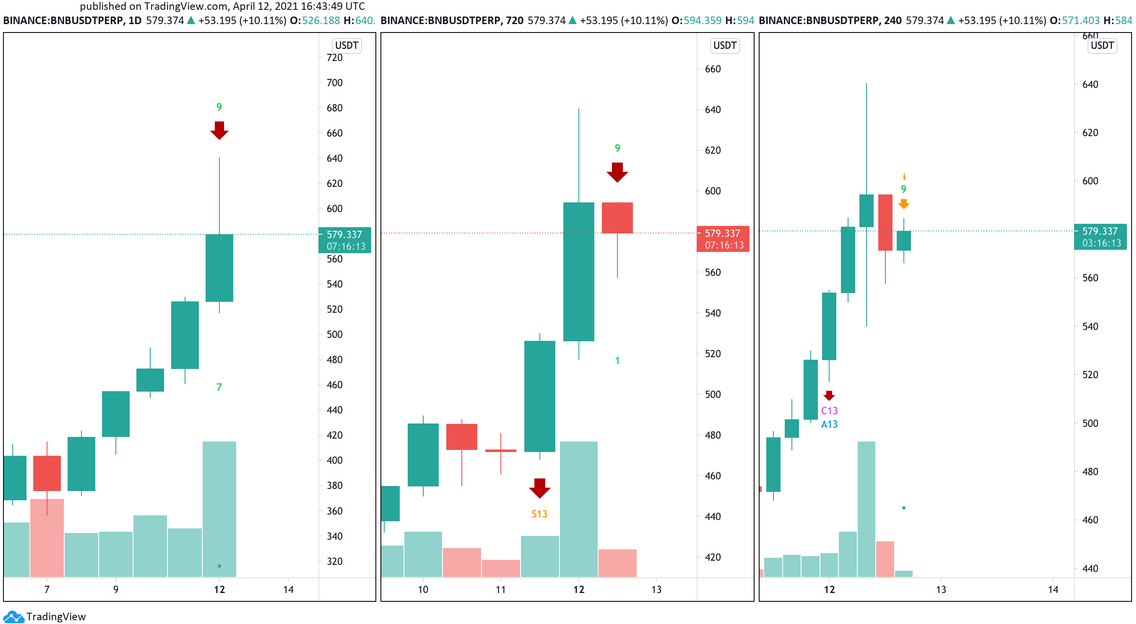 Given the substantial increase in upward pressure that BNB has seen over the last few months, the bullish outlook cannot be disregarded.

Slicing through the recent high of $640.50 may generate FOMO among market participants, pushing prices to $750 or even $800.