Bitcoin Consolidates While The Number Of Tokens Keeps Rising

The parabolic rally in came to an end on Apr. 14 when the price of June futures reached $66,450 per token. The ascent was unprecedented considering a Bitcoin was worth around five cents in 2010.

It is virtually impossible to pick tops or bottoms in markets when they explode higher or become falling knives. Bitcoin was overdue for a correction, and the June futures over halved in value from the Apr. 14 high to the May 19 low at $30,275 on the June contract.

Meanwhile, the speculative frenzy continues as the number of new tokens coming to market rises each day. According to CoinMarketCap, as of June 1, there were 10,201 tokens in the cryptocurrency asset class. The number rose above the 10,000 late last month. By the time you read this piece, the number will be higher. Market participants are searching for the next token that will turn a small investment into a large fortune. While most tokens will wind up as dust collectors in computer wallets, some could deliver Bitcoin-like returns.

Bitcoin and remain the 800-pound gorillas in the asset class. As the leaders' prices consolidate after the recent substantial corrections, the hunt for diamonds in the asset class continues with new entries fueling the greedy lust.

Bitcoin’s first move lower from the recent high came as Elon Musk decided that Bitcoin mining is terrible for the environment. His about-face decision to not accept Bitcoin as payment for Tesla's (NASDAQ:) EVs caused a wave of selling. However, China’s ban on cryptocurrency created the price carnage that pushed Bitcoin to the $30,000 level.

China plans to roll out its digital yuan soon. The nation does not want any competition to its version of a cryptocurrency to maintain control of its money supply. Other governments worldwide likely welcomed China’s decision as Bitcoin threatens central banks, monetary authorities, and governments. Controlling money is critical for maintaining power.

Bitcoin’s technical picture does not look all that ugly after the recent plunge. 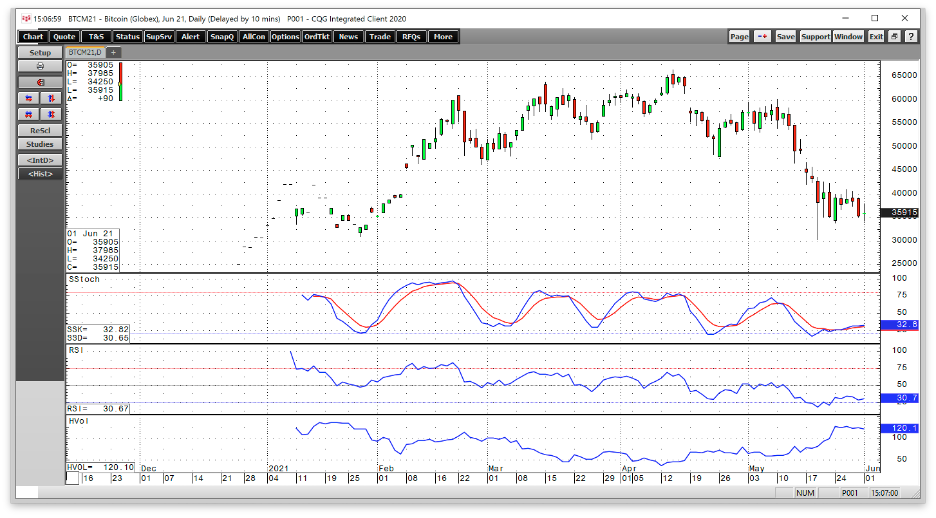 Daily price momentum and relative strength indicators are below neutral readings and near oversold territory. Daily historical volatility at over 120% reflects the wide daily trading ranges and recent price carnage. Meanwhile, $30,000 has held, and the price has not returned to test or challenge the recent low.

Open interest in the futures arena moved lower- not bearish

Open interest in a futures market is the total number of open long and short positions. When open interest declines with the price of a futures contract, it is not typically a technical validation of a bearish price trend. 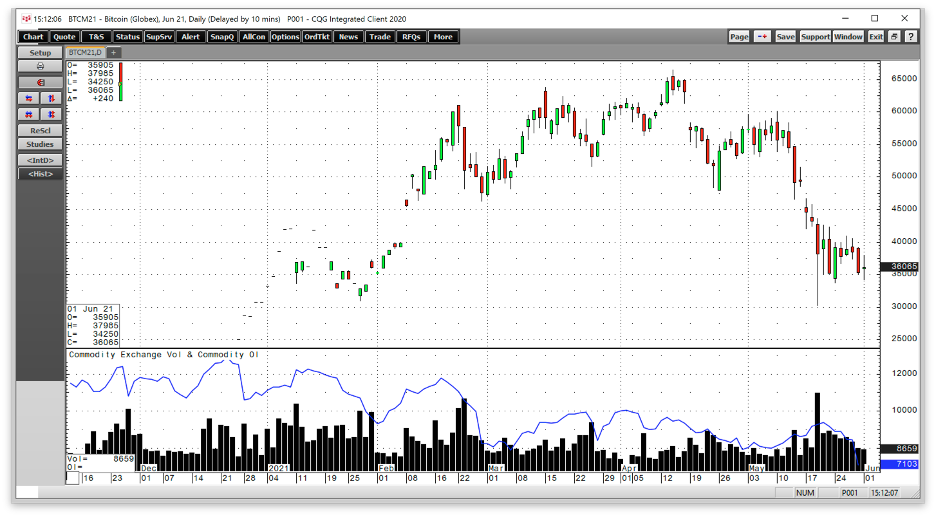 The chart shows that the open interest metric in the standard Bitcoin futures contract declined from 9,448 contracts on the day the cryptocurrency reached its high to 7,103 contracts at the end of May. 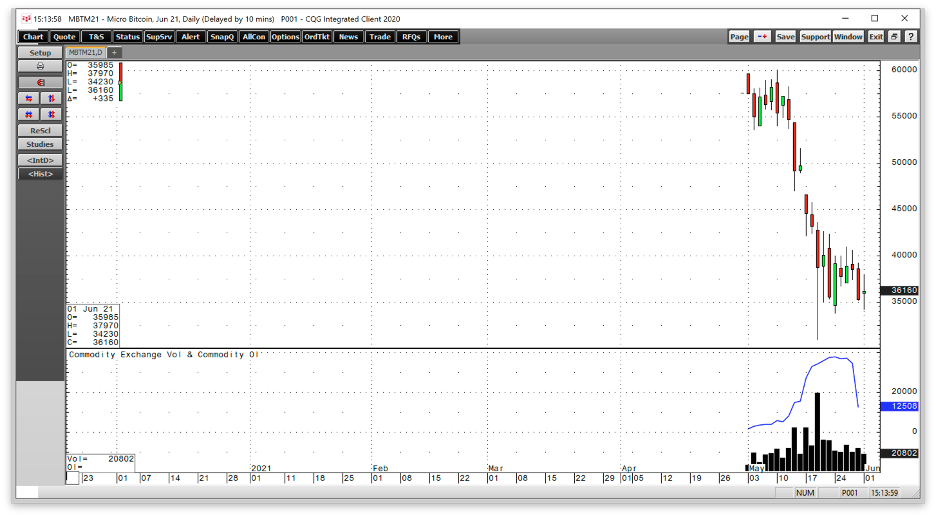 The decline in the metric is a sign that market participants are looking elsewhere in the asset class for opportunities. Each day, there are more tokens to choose from for the market’s speculating pleasure.

The number of tokens continues to rise

In a sign of how quickly the number of tokens is rising, when I sat down to write this article, there were 10,201. Less than one hour later, the number already increased.

With 10,204 tokens and rising, the increase in tokens competing for capital has been incredible:

Today, the number stands at 10,204 tokens. Tomorrow it will be higher.

Parabolic moves in markets cannot go on forever. Meanwhile, trying to pick a top when a market is exploding higher is not only a challenge but it's like trying to stop a freight train.

Many market participants have lost their shirts by standing in front of a bullish trend; even if they were 100% correct in the long-term, the short-term losses made it impossible to weather the storm.

The old saying, “markets can remain irrational for far longer than one can remain solvent,” is the embodiment of the moves in Bitcoin, Ethereum, and many other cryptocurrencies.

A period of calm consolidation can be healthy for markets after irrational moves. Consolidation establishes technical support and resistance levels, chart patterns, and provides clues about the market’s sentiment, which always drives prices.

The digital currency asset class appeals to my libertarian nature as it removes the control of the money supply from governments. However, the threat to power is a stumbling block along with custody and carbon, which Elon Musk’s Tesla recently highlighted.

Expect lots of volatility in the digital currency asset class over the coming weeks, months, and years, and you will not be disappointed. Only invest what you are willing to lose. From a risk-reward perspective, Bitcoin is a safer investment at below $36,000 than at over $65,000 and Ethereum at below $2,600 instead of above $4,440.

When it comes to the new entries, be selective and only throw capital that you can lose as the odds favor dust collectors instead of diamonds.