Bitcoin: Did China Just Make A Deal With The U.S.?

There was a lot of drama over China’s announcement over the weekend forcing miners to pack up and leave the country. It sparked a furious sell off earlier in the week which briefly breached recent lows just above $30,000 per coin.

But the big question for me, as always, is why now? There are never any coincidences in geopolitics. Things happen when they happen for reasons. And sometimes those reasons are not readily apparent.

In the case of Bitcoin it happened after the FOMC markets the same day Presidents Biden and Putin met in Geneva, signaling a shift in monetary policy which drained markets of a lot of dollars.

So the stage was set for China to pile on, here.

For Bitcoin bulls, especially those looking at things technically, these were a scary couple of hours. Bitcoin has been vulnerable psychologically since the May 19 bloodbath. It’s never bullish when a recent low is violated, it’s especially worrying when that May 19 low of $30,261.70 had already been tested a few times and seemed to hold. 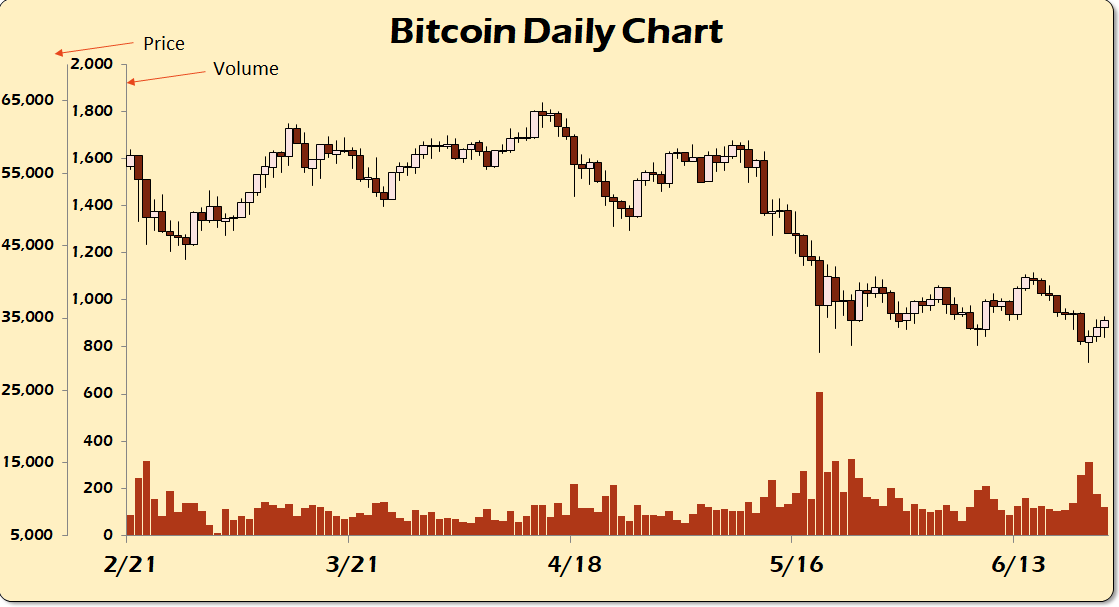 So, in no way should we make light of that violation. But as the day wore on and the market refused to break down further, we saw the inevitable snapback rally associated with the bulls making a big statement, forcing overzealous shorts to cover.

But as I’ve discussed multiple times recently, governments and the traditional financial community are hostile to Bitcoin and all cryptocurrencies. They have stepped up that hostility with the price getting out of control above $64,000 and the cracks in the financial system widening in the aftermath of the Coronapocalypse.

Anyone serious about what Bitcoin is, what it represents and what it was designed to do knew this fight was coming and isn’t surprised now that it’s here. So, China’s crackdown on the immense amount of mining going on in the country is no surprise. China’s pilot projects to introduce its digital yuan, already struggling against entrenched systems like Alipay and Tenpay, are further complicated by any strong cryptocurrency underground economy.

And the reality is that Bitcoin mining in China was always tacitly approved of by the Chinese government as long as it served the CCP’s purpose to pressure western financial dominance as an extension of their mercantilist playbook. But, at some point, that relationship was going to end.

But there are a few other issues at play here that may not be readily apparent. And I went over them in a video I did recently. Asking the following question: 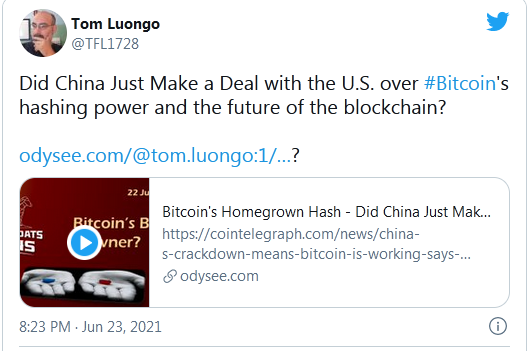 Like I said, sometimes the reasons aren’t readily apparent. So, here’s what I thought then and still do.

At Bitcoin 2021, Kevin O’Leary, chairing a discussion on being a Public Bitcoin Mining company made the statement that there’s more than $1 trillion in institutional money that wants to come into cryptos but are being held back by a number of things.

First, there are custodial issues, legally, but those are being worked out. States like Wyoming have, and soon others will have, the financial institutions capable of acting as custody agent for moving funds in and out of crypto. But the problem they focused on in this discussion was ESG — Environmental, Social and Governance — compliance which has inserted itself as a roadblock thanks to The Davos Crowd’s declaring bitcoin to be “not green enough.”

That argument is, of course, a silly one which I addressed recently with respect to Lizzie “Slapaho” Warren’s silly comments about Bitcoin. Elon Musk was, I think, forced to make the comments he made to help break the market back in May.

Where so many Bitcoin bears go wrong in their analysis is thinking that all the banks are against cryptos. But they aren’t. If anything they all want in because the reality is that their traditional business has been choked off by the central banks.

Remember, I told you last month that the big untold story of Davos’ Great Reset is that the commercial banks are to be thrown under the bus and fed as chum to the remnant of the Occupy Wall St. crowd when the next iteration of the global financial collapse gets underway.

The Davos Crowd in Europe is setting up the U.S. banks to be the villains of the next big financial crisis. Obama through Biden is putting in place regulation, tax policy, court decisions, etc. to ensure both maximal anger at the banks and get the maximum effect on the structure of the U.S. economy.

So, once this crisis hits and the banks are caught once again having been irresponsible, they will be blamed like no other villain has been blamed since Hitler. And the Progressives on Capitol Hill — the Lizzie Slapahos and the AOCs — will demand the banks pay for killing the little guy.

Now let’s connect another couple of dots. If O’Leary’s numbers are even close to correct then the floor under Bitcoin is a lot stronger than recent price action would indicate. That means there is a third reason holding back their investment into crypto.

Bitcoin’s hashing power being centered in China. A lot of miners there saw the writing on the wall and began moving out of the country earlier this year. China’s share of bitcoin’s hashing power had dropped to around 50% of the market. In a business this big and a potential investment pool also large enough looking to make it bigger China controlling that much hashing power is a national security issue.

So, the deal is a simple one. China doesn’t want the corruption surrounding Bitcoin mining. It also is tired of it destabilizing its electrical grid, feeding off its electricity subsidie. It also helps knock a few local officials skimming mining profits back down to size. It also wants more control, not less, over its internal currency flow.

The U.S. wants more security surrounding Bitcoin production to support its financial oligarchs staying relevant and tapping into the massive latent demand for cryptos in general. Pension funds, yield starved after nearly a generation of being turned Japanese can no longer tap the fracking junk bond markets to make their 8% mandated returns thanks to Biden’s doing Davos’ bidding to shut down U.S. domestic production.

In a podcast at the beginning of the year I made the prediction that DeFi would become the new junk bond market in the U.S. because of this as the potential returns off a rising crypto market was attractive to yield-starved investors.

And with new BIS rules putting cryptocurrencies on par with junk bonds for capital reserve requirements, that prediction seems to have been prescient. The reason the Fed raised interest rates in 2017-18 was to help pension funds meet their obligations. That policy had to fail then and it quickly reversed course last year.

Now they aren’t going to do so for at least another eighteen months and the markets freaked out by a simply 5 bps raise of both IOER and the RRP rates.

So, this leaves us with the scenario that Bitcoin actually helps fix this very real problem and it does so without the Fed or the Treasury having to just bail everyone out and foist the bills off on the next generation. Moreover, tt blunts the Davos plan to just blow everything up, issue a bunch of scrip, i.e. MMT, and turn us into China on steroids.

And if that helps mitigate some of the tension between the two countries it’s a small price to pay allowing institutions and big players who want into crypto to further accumulate at much lower prices while keeping all the bears scared to join in because they still think the headlines tell the tale.

In my experience, headlines rarely do anything close to that. A close this week above $30,000 looks more like a matter of watching out above rather than below.