is losing ground as it signals that a long-term corrective period is about to begin.

Bitcoin’s latest correction may get a bit steeper as it sits underneath a massive supply barrier and on top of weak support.

The pioneer cryptocurrency has enjoyed an impressive bull rally over the past few months. Since early September 2020, Bitcoin saw its market value skyrocket by nearly 330%.

Given that such a bull did not experience any major corrections, multiple on-chain metrics suggested that Bitcoin was hovering in overbought territory.

The pessimistic scenario seems to have been confirmed recently after a spike in selling pressure sent prices below a critical support barrier. Indeed, BTC appears to have broken below the lower trendline of a symmetrical triangle that had been developing since the peak on Jan. 8.

As Bitcoin sliced through the $33,800 hurdle, the SuperTrend indicator flashed a “short” signal adding credence to the bearish outlook. 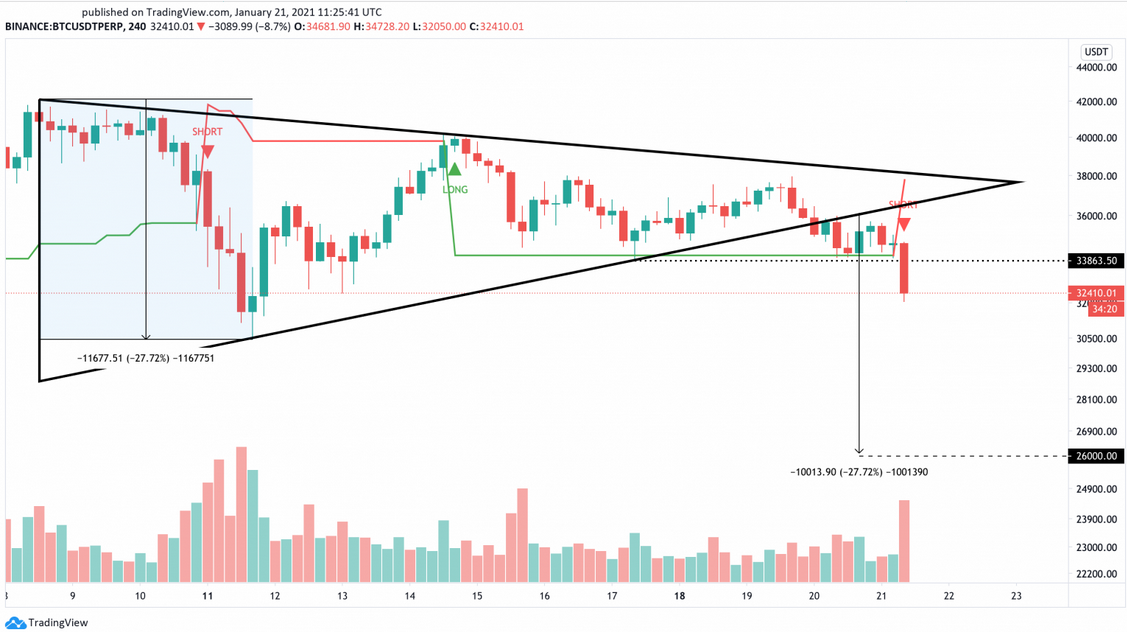 The distance of the triangle’s widest range suggests that the flagship cryptocurrency is primed for a 28% downswing. A further increase in sell orders behind this token could push its market value towards $26,000 or lower.

Sitting on Top of Weak Support

IntoTheBlock’s In/Out of the Money Around Price (IOMAP) model suggests that on the way down, Bitcoin could find a certain level of support at $31,000.

Holders within this price range may try to prevent their investments from going into the red. They might even try to add more tokens to their holdings to allow prices to rebound. But given the significant resistance ahead, Bitcoin could slice through this hurdle to meet the triangle’s target at $26,000.

In/Out Of The Money Around Price

The only way Bitcoin can resume its uptrend is by closing above the $36,000 resistance barrier. But doing so will not be easy as the IOMAP cohorts show that over 2.10 million addresses bought more than one million tokens around this price level.

It is worth noting that the ongoing narrative around Bitcoin is that large investors are buying a significant number of tokens at every dip.

Such market behavior suggests a redistribution of tokens over the past few months that has been essential for the upward price action. However, it may not have any effects on the ongoing corrective period.

Once mid-sized and large whales both begin to accumulate simultaneously, Bitcoin could climb higher as it did during the first week of January.