Bitcoin appears to have entered a new corrective period that will likely bring Ethereum down with it.

The MRI indicator supports the thesis that Bitcoin is bound for a steep correction.

The technical index presented sell signals in the form of red one candlesticks on BTC’s 1-month, 1-week, and 3-day charts. Although some of these bearish formations have developed a few trading sessions back, the near-term future still does not look good for the bulls.

A further increase in sell orders around the current price levels could see Bitcoin enter a one- to a four-month-long corrective period before the uptrend resumes. 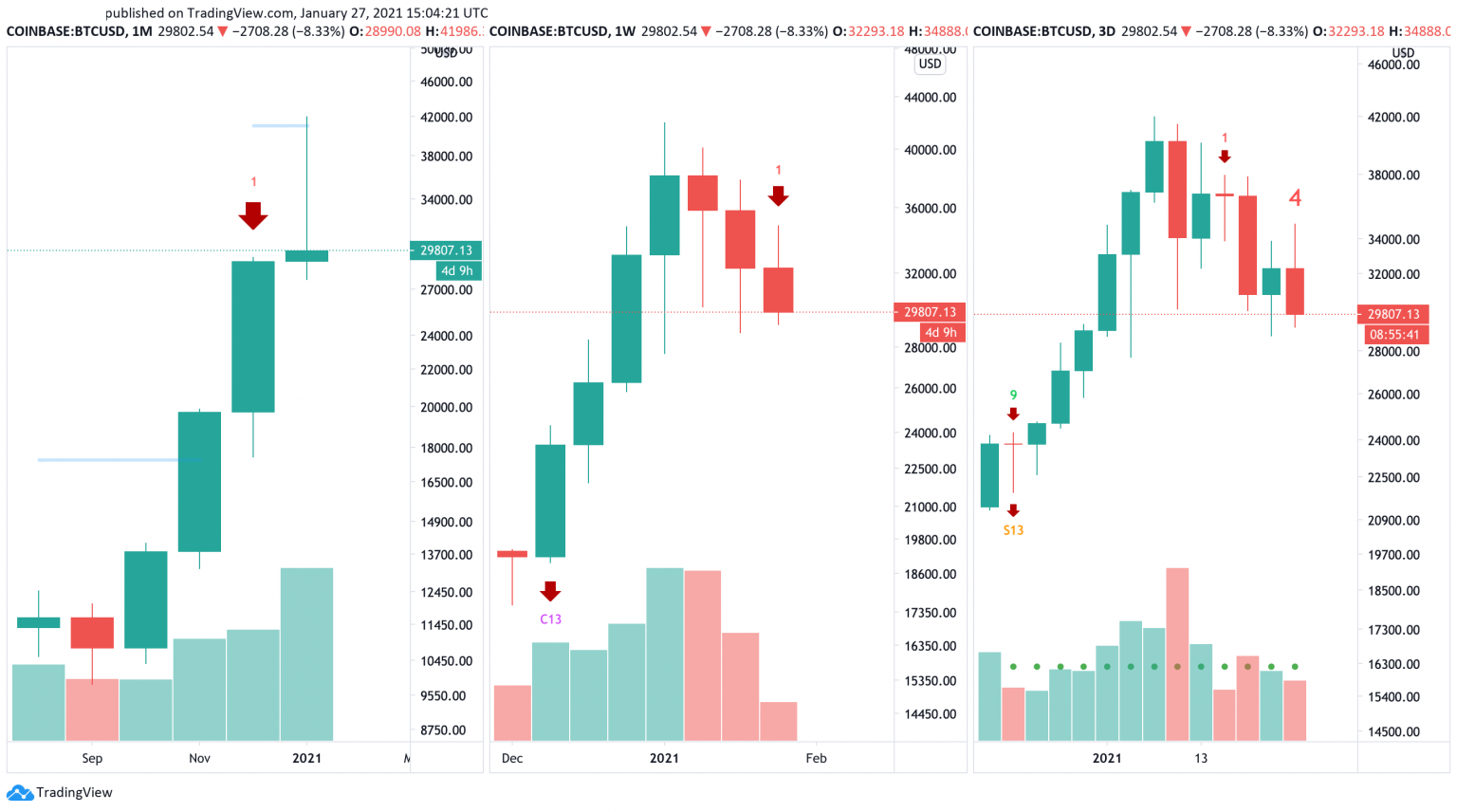 As the a-SOPR surpassed the 1.24 mark while Bitcoin made a new all-time high of $42,000, these prices were too attractive for investors to wait any longer before taking profits.

If this on-chain gauge proves to be as accurate as it was in the past when it anticipated the market top of April 2013, December 2013, and December 2017, Bitcoin could be bound for a devastating retracement. 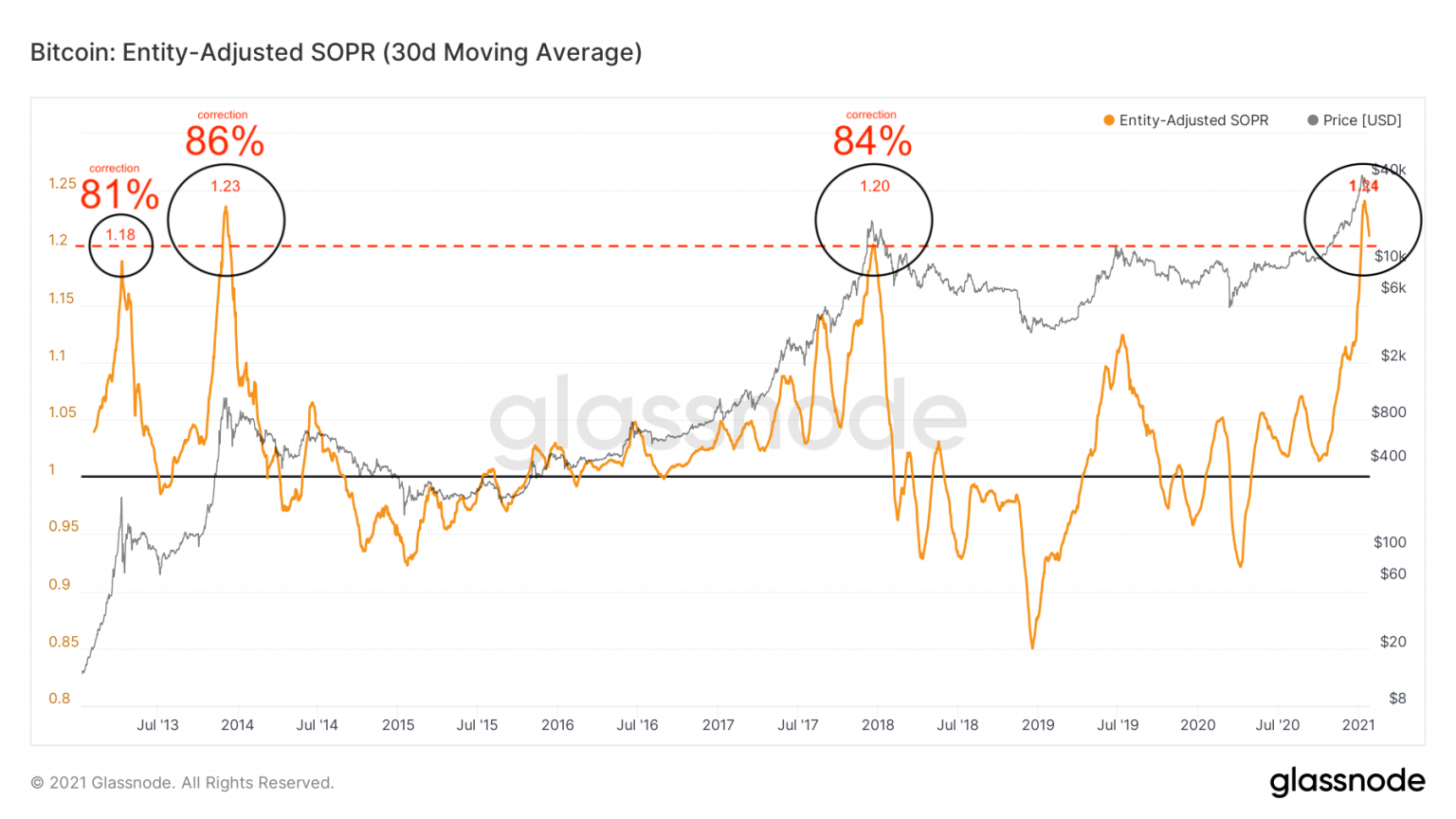 Some whales (high net worth traders) have already started booking profits. Indeed, the number of addresses holding more than 1,000 BTC dropped by more than 0.3% since Jan. 24. Roughly seven whales have left the network over this short period, adding downward pressure to Bitcoin.

The sudden decline was significant when considering these large investors hold more than $300 million worth of BTC. Primarily, it shows high-net-worth-individuals’ conviction that there is more room for prices to go down.

If the selling spree continues at the current rate, Bitcoin might push for lower lows despite its ongoing consolidation period. 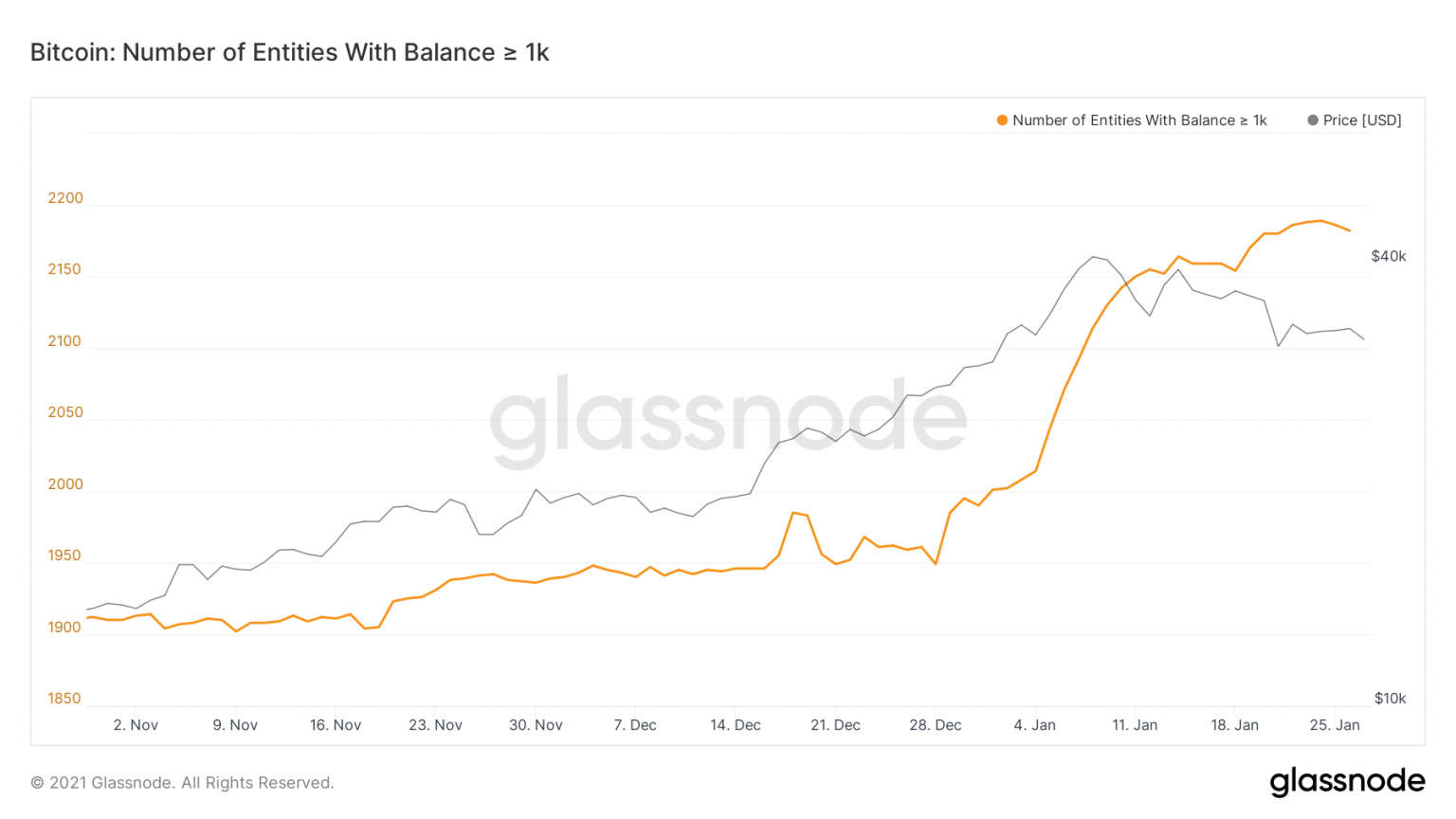 IntoTheBlock’s In/Out of the Money Around Price (IOMAP) model reveals no significant demand walls underneath Bitcoin that will prevent it from dropping further. Based on this on-chain metric, the only considerable interest area sits between $28,550 and $29,430. Here, roughly 160,000 had previously purchased nearly 150,000 BTC.

Such a weak support barrier may have the ability to absorb some of the selling pressure momentarily. But if Bitcoin can crash through this hurdle, it would likely drop to $23,000.

The IOMAP cohorts also show that Bitcoin faces stiff resistance ahead. Nearly 800,000 addresses bought approximately 300,000 BTC between $31,230 and $32,150. This crucial supply barrier suggests that bulls will struggle to push prices up.

And even if they do, the $35,000 level is also stacked with more than 500,000 addresses that are currently underwater.

The MRI index forecasts that Ethereum’s uptrend is nearing exhaustion. The index is currently flashing a warning signal on the weekly chart. Even though the real bearish formation is expected to develop within the next weekly trading session, it can be seen as a reason to stay out of any long trades until proven otherwise.

A glimpse of Ether’s weekly chart reveals that the MRI setup has been incredibly accurate at anticipating local tops on this altcoin’s trend. The five sell signals that the indicator has presented within ETH’s weekly chart since 2020 were validated, resulting in significant retracements.

Therefore, this pessimistic forecast must be considered despite the historical moment that the cryptocurrency market is experiencing. 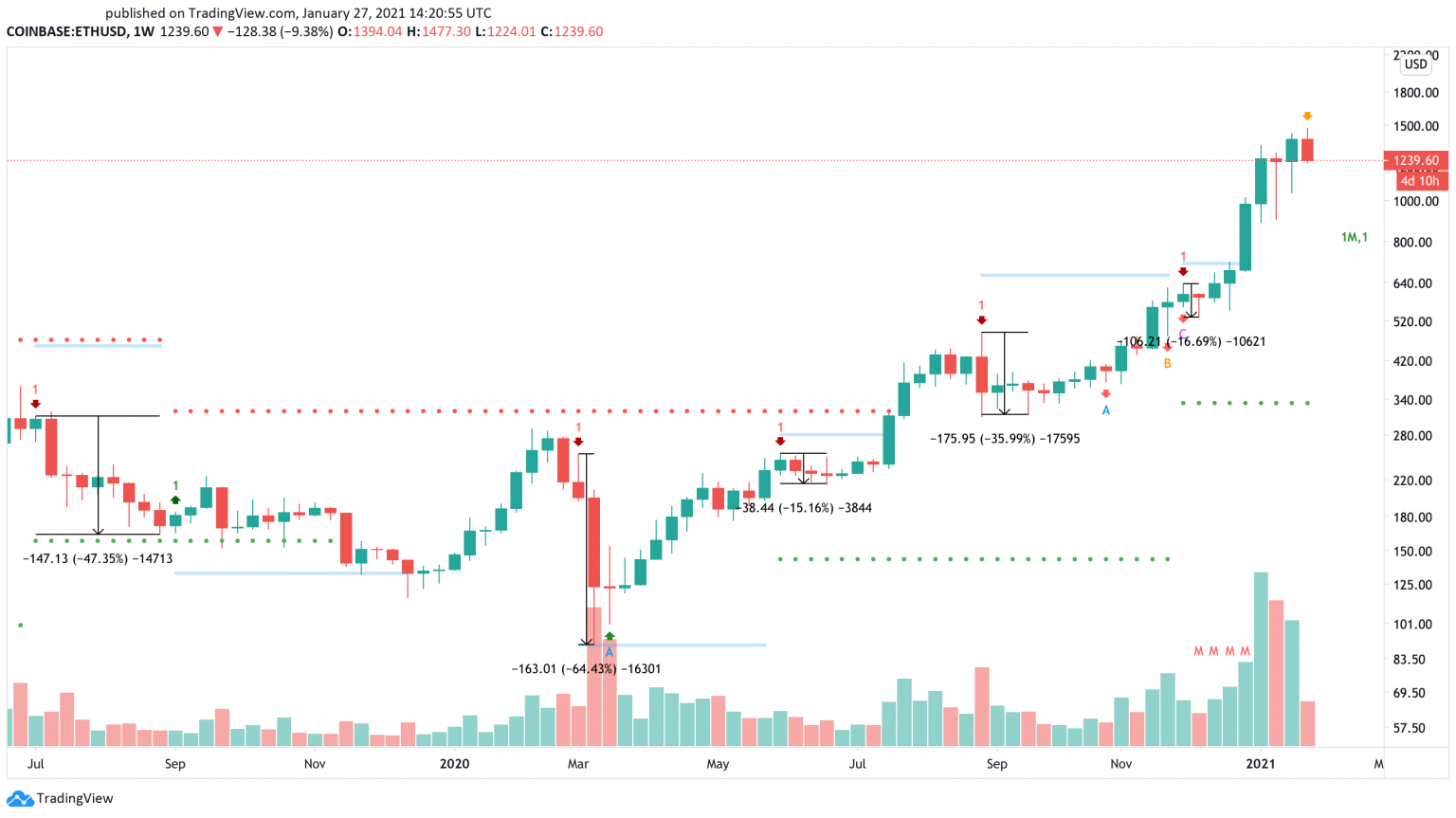 It is worth noting that the number of Ethereum whales, addresses with millions of dollars in ETH, have been significantly decreasing their holdings over the past week.

Such a downswing in the number of large investors behind Ether may seem insignificant. However, considering that these whales hold between $130 million and $1.3 billion in Ether, the sudden spike in selling pressure can translate into billions of dollars.

The bearish thesis holds when looking at Ethereum’s network growth.

Since Jan. 7, the number of new daily ETH addresses has steadily declined. Roughly 150,000 addresses were joining the network then. Now, 120,000 addresses a day are being created, representing a 20% drop. 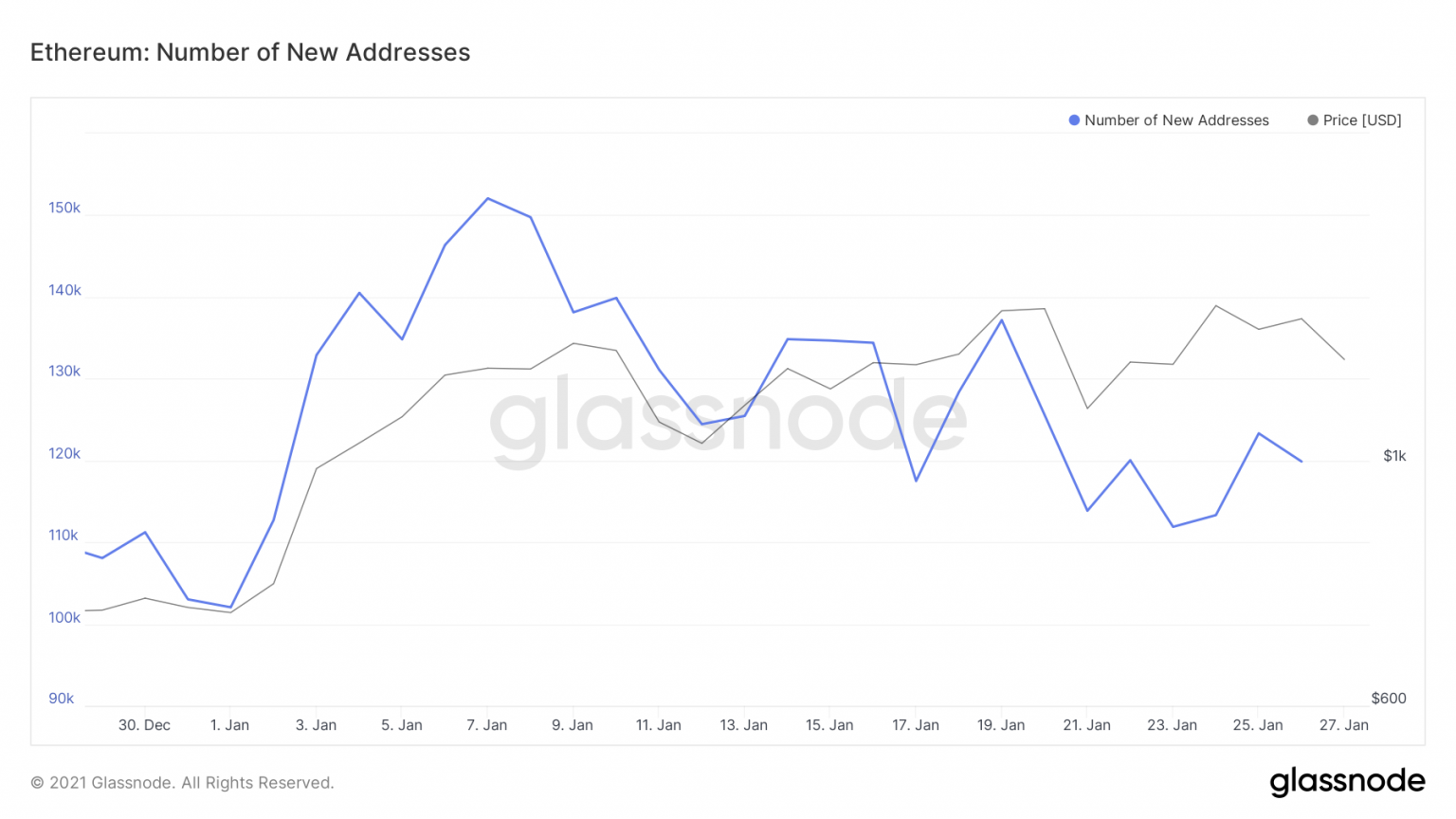 Based on IntoTheBlock’s IOMAP, approximately 1.30 million addresses had previously purchased nearly 9.60 million ETH between $1,120 and $1,230. Only a daily candlestick close below this demand wall will serve as validation of the pessimistic outlook.

Despite the grim worst-case scenario, the cryptocurrency market’s unpredictability suggests the bullish view cannot be taken out of the question.

The IOMAP cohorts model shows that Ethereum faces stiff resistance at $1,300. Roughly 340,000 addresses hold 6.90 million ETH around this price level, meaning that it will take an enormous amount of buying pressure to send prices higher.

On-chain data reveals that Bitcoin and Ethereum’s weighted social sentiment on Twitter has significantly decreased over the past month. From a counter sentiment approach, the fact that the crowd is quite pessimistic about these cryptocurrencies could be considered a positive sign.

Historically, prices tend to recover when social perception is low. But if this were to happen, the question is how high can BTC and ETH rebound before validating the bearish scenario.

One of the most significant resistance barriers ahead of Bitcoin sits at $35,000. If the downtrend seen recently were to reverse, this hurdle would either validate or reject further upward price action.

Ethereum, on the other hand, sits underneath a significant supply wall. When considering the nearly 900,000 addresses that bought over 11.60 million Ether between $1,300 and $1,490, only a candlestick close above this range can invalidate the bearish thesis.