Extreme volatility levels in the cryptocurrency market have led to massive liquidations over the past few weeks. Despite the significant losses incurred across the board, data shows that Bitcoin, Ethereum, and XRP are about to resume their respective uptrends.

Bitcoin took a 12% nosedive in the past 36 hours after rising to $52,700. The downswing added credence to the thesis that BTC is creating an inverse head-and-shoulders pattern on its 4-hour chart.

Coincidentally, the Tom Demark (TD) Sequential indicator recently presented a buy signal within the same time frame. The bullish formation developed as a red nine candlestick, suggesting that Bitcoin is bound for a bullish impulse.

If validated, BTC could rise toward the head-and-shoulders neckline at $52,000 to complete this technical pattern’s right shoulder. A further spike in buying pressure around this resistance barrier could lead to a 17% breakout that sends Bitcoin to $61,000. 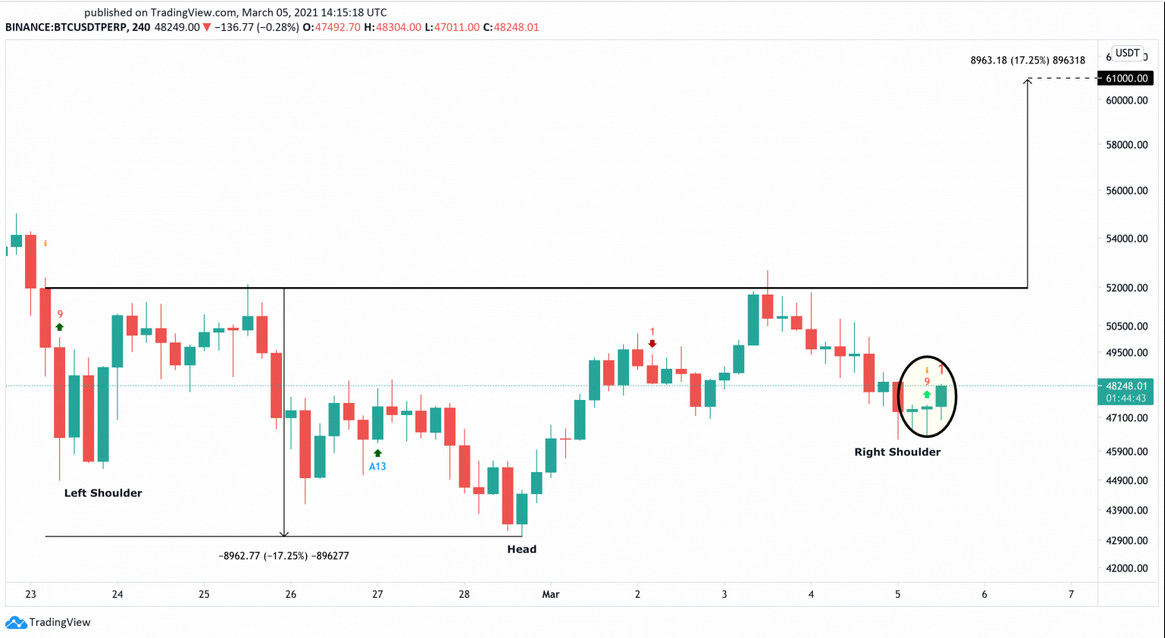 MicroStrategy's (NASDAQ:) announcement that it once again bought the Bitcoin dip, adding another $10 million to its treasury, suggests that momentum is indeed building up for the uptrend to resume.

That notion is further validated by the rising number of new daily addresses joining the network. On-chain analyst Willy Woo maintains that Bitcoin’s user count is “growing at insane rates,” similar to trends seen during the 2017 bull market.

As long as Bitcoin continues to hold above $47,000, all of these fundamental developments will continue to push prices higher.

Rafael Schultze-Kraft, co-founder and CTO at Glassnode, maintains that this is a “very strong on-chain support” level, as roughly 500,000 BTC were moved at this price point. “[It is] important that we hold [$47,000], otherwise we could see low forties quickly before the next upwards movements,” said Schultze-Kraft.

Ethereum is back in the spotlight after core developers agreed to add the blockchain’s crucial EIP-1559 proposal to the London fork in July.

Research coordinator Tim Beiko told Crypto Briefing that EIP-1559 could be thought of as an “ETH buyback” proposal. The update will see a portion of the gas fees on every transaction get burned, reducing Ether’s supply and essentially making it a deflationary asset.

The announcement comes at a time when Ethereum has been consolidating within a symmetrical triangle on the 4-hour chart. If market participants were to buy the news, this cryptocurrency could rise towards the pattern’s upper trendline at $1,570.

A 4-hour candlestick close above this resistance barrier would be followed by a 21.50% move in the same direction, sending Ether to $2,000. This target is determined by measuring the height of the triangle’s y-axis and adding it to the breakout point. 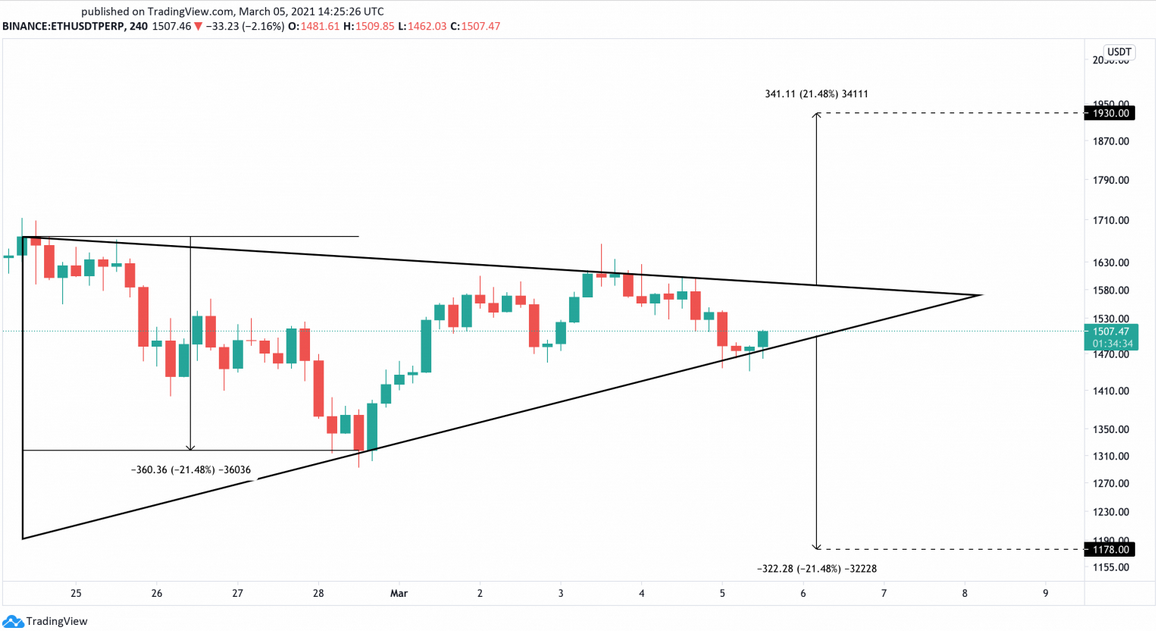 Transaction history shows that Ethereum sits on top of a massive support zone while resistance is weak.

Based on IntoTheBlock’s “In/Out of the Money Around Price” (IOMAP) model, over 370,000 addresses previously purchased nearly 10 million ETH around $1,480. This demand wall could absorb any selling pressure, capping Ether’s downside potential.

Holders within this price range will likely do anything to keep their investments “In the Money;” they may even buy more tokens to allow prices to rebound.

On the flip side, the IOMAP cohorts show little to no resistance ahead. The only considerable hurdle lies at $1,570, where more than 730,000 addresses are holding 3.70 million ETH.

Such an insignificant supply wall suggests that the bulls will not have trouble driving Ethereum’s price higher.

While market participants are concerned about XRP being deemed a security by the U.S. Securities and Exchange Commission (SEC), Ripple continues to expand its services in Eastern markets, where there is reportedly more regulatory clarity.

“[The lawsuit] has hindered activity in the United States, but it has not really impacted what’s going on for us in Asia Pacific,” Garlinghouse told Reuters. He concluded that XRP is still traded on over 200 exchanges around the world, and that only “three or four” U.S. exchanges have halted trading.

While Garlinghouse remains positive about Ripple’s legal stability, XRP is on the brink of a major bullish impulse. The seventh-largest cryptocurrency by market capitalization seems to have developed an inverse head-and-shoulders pattern on its daily chart.

Although XRP is currently forming the right shoulder of the bullish formation, it can break out of that pattern. A spike in buying pressure that allows this altcoin to close above the pattern’s neckline at $0.66 could lead to a 74% upswing towards $1.16. 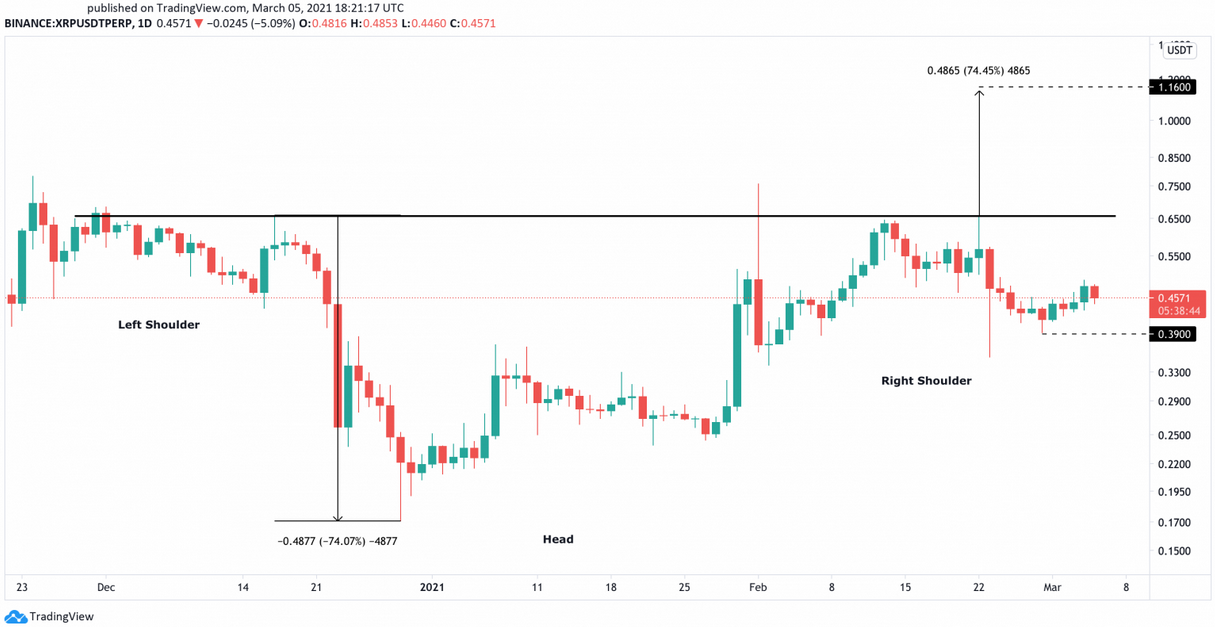 Traders must wait for a daily candlestick close above the $0.66 for the inverse head-and-shoulders pattern to be validated. Failing to do so could lead to a downswing to the $0.39 support level.

If XRP breaks below this critical support barrier, it will invalidate the bullish outlook and lead to a steep correction towards $0.20.