Most of the top 20 altcoins by market cap are down over 30% as regulatory news from China tanks prices.

Bitcoin has slumped below $30,000, a crucial level of psychological support that will likely have a major impact on sentiment.

Bitcoin is now trading in the $29,800 range, approximately 55% down from the all-time high seen in April.

Monday saw over $1 billion in liquidations as Bitcoin and both sunk lower. Bitcoin has now sunk to levels not seen since late January. 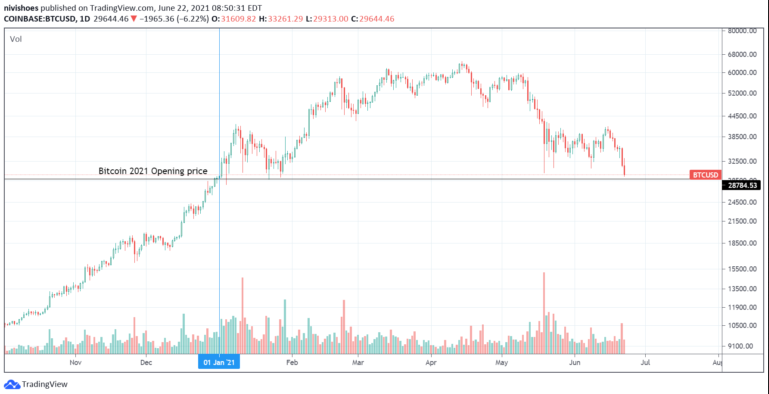 It’s widely agreed that a drop below $30,000 could trigger a major selloff in the market.

The downward pressure is largely being generated by regulatory news out of China, which recently took action to ban Bitcoin mining as well as Bitcoin trading.

China is the world’s leading BTC mining hub and perhaps the largest trading market as well. With plans for the new digital yuan closer than ever, it seems that the government is unwilling to compete with Bitcoin.

China has taken measures to ban or restrict Bitcoin many times in the past, perhaps leading to a muted reaction this time around. However, if China is truly taking firm action against Bitcoin, the impact will be severe.

“BTC has been consolidating between $30K-$42K for the last 5 weeks. We believe this ongoing consolidation is going to continue in the coming weeks,” stated Balani, adding that the “macro environment does not look weak with broader markets continuing to rally.”

Balani stated that Delta Exchange expected BTC to bounce and challenge $40,000 in the coming weeks. However, he also said $30,000 was the key level for traders to watch.

“Should we concede 30,000; the sentiment will take a massive hit. A conclusive breakdown below $30K might be coupled with heavy selling activity in BTC and entire crypto market.”

Bitcoin has since broken through this line of support, likely to the dismay of many in the market, and the broader impact this price dip will have on altcoins remains to be seen. Ethereum last traded at $1,800, and almost all of the top 20 altcoins by market cap are down by over 30%.