Bitcoin: Is This Another Buyable Pullback?

With () already down 25% from its recent all-time-high, it is very reasonable to ask if this mini-flash crash is another buying opportunity or if BTC should be avoided at all costs. Using the Elliott Wave Principle (EWP) and Technical Analyses (TA) combined, I will share some of my insights I provide daily to my premium cryptocurrency members. See my daily update video from last Friday here.

In my from mid-December, I was looking for Bitcoin to reach $23,700+ based on a standard Fibonacci-based impulse pattern. Boy, did I get a lot more than bargained for: $40K+. Indeed, as said in prior articles: in bull markets, upside surprises and downside disappoints.

So why did BTC trade so much higher?

Because it experienced an extended 5th of a 5th wave. They can always happen and are impossible to know beforehand: anticipate, monitor and adjust is all we can do. How to possibly trade them and not be left behind? Raise stops to prior day lows, take partial profits on the way up, and if stopped out but then the instrument moves to new highs again, buy the breakout. Ad infinitum, aka “rinse and repeat” until it stops working. 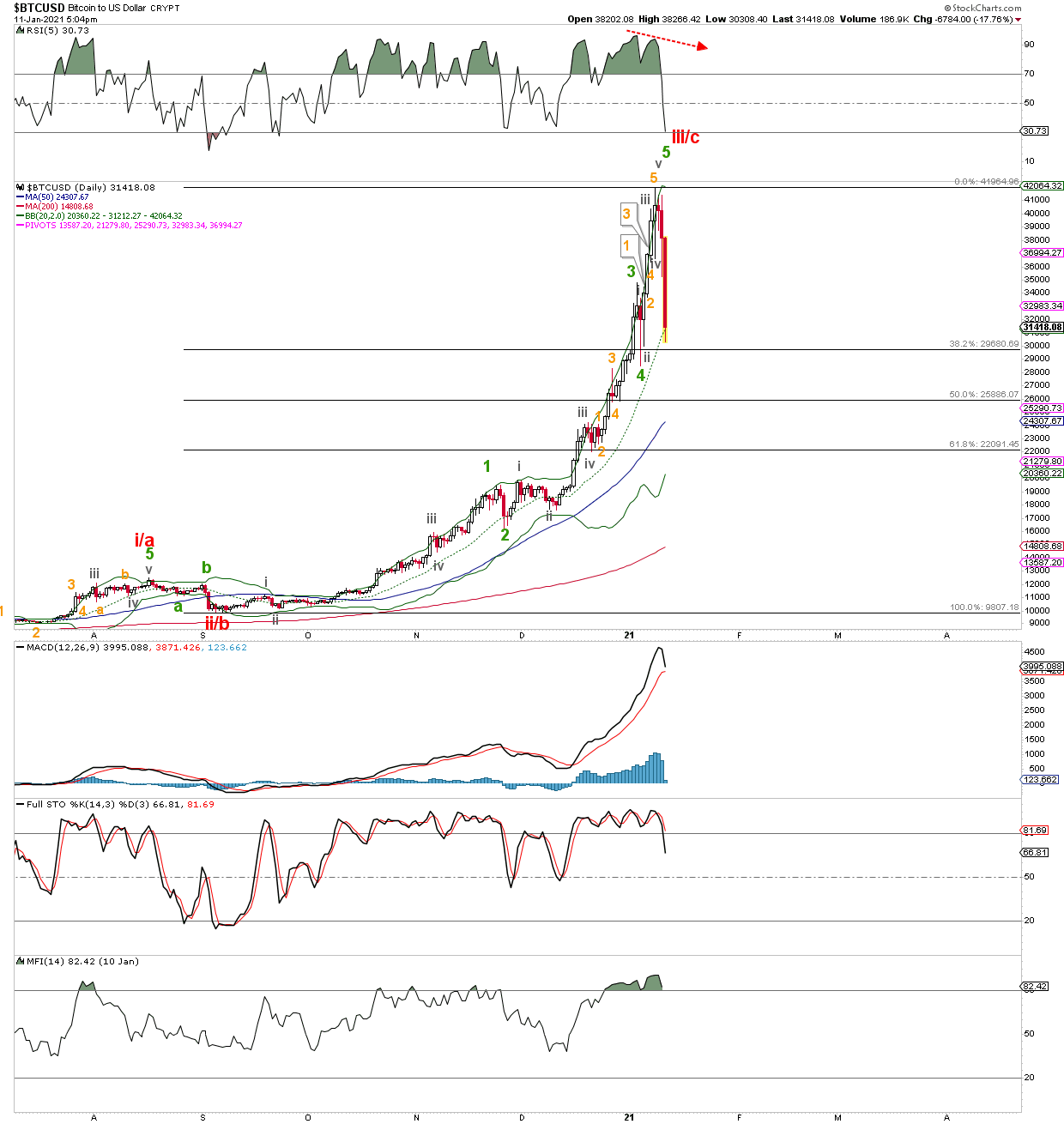 The daily chart above sports the micro-EWP count for BTC and shows the perfect sub-dividing impulse pattern higher since mid-December. Every single price move can be accounted for with a wave label. Picture-perfect. We know the beauty of an impulse move after wave-3 comes wave-4, and after wave-4 comes wave-5, on all wave-degrees. Thus, with one of the larger pullbacks in BTC now under way since late-December and November last year (in percentages), it is logical to place a (red) intermediate-iii/c label at the recent ATH. Why both an iii and a c-label? Because one never knows beforehand if it will be three waves or five waves in either direction (up or down). Given the strength of the recent rally, I prefer the wave-iii label, and which I will focus on here, but I must remain objective until one EWP count or the other is disproven by the markets.

Thus I prefer to see the current decline as a (red) intermediate wave-iv, which should ideally bottom around the 38.2% retrace of the entire (red) intermediate wave-iii rally that started since the September 2020 low: $29,680. Today, we already reached as low as $30,300, which is close to that retrace-level and could be all of wave-iv. However, I view this wave-iv as a multi-week event, and I, therefore, expect at least a bounce back soon to around $36,130-39,210 before the next leg lower starts. That would complete a simple a-b-c lower, but 4th waves are known to be notoriously tricky and could morph into something more complex, such as a flat or a triangle (see here). We’ll have to deal with that as it unfolds.

For now, the short-term downside risk seems to be small as several indicators are already close to oversold, such as the daily RSI5. It already warned of a correction due to the slight negative divergence (red dotted arrow). What supports higher prices, once this wave-iv is complete, is the strength of the MACD and the money flow indicator (MFI14). A lot of money is flowing into BTC, even on a weekly timeframe (not shown), but it is now very overbought and needs a breather, which is now on our hands.

Thus, I prefer this wave-iv to bottom at around $29K +/-1K over the next one to two weeks before wave-v to new ATHs kicks in. It is most likely to be around $50-60K to complete an even larger 3rd wave (major-3). Then the next 4th wave (major-4) should occur, etc. I do not view the rally since 2018 complete until we see at least two more, even larger rallies, from that major-4 low with six-digit upside targets.

But let’s not get too greedy and focus on the more intermediate-term instead. Although BTC could move back to $18K+/-2K without any problem, I view the $29K+/-1K as a more likely support zone for the wave-iv. And remember “upside surprises and downside risk.” A break and close below $28,400 is the first warning of worse things to come as then next support is not until $23Ks