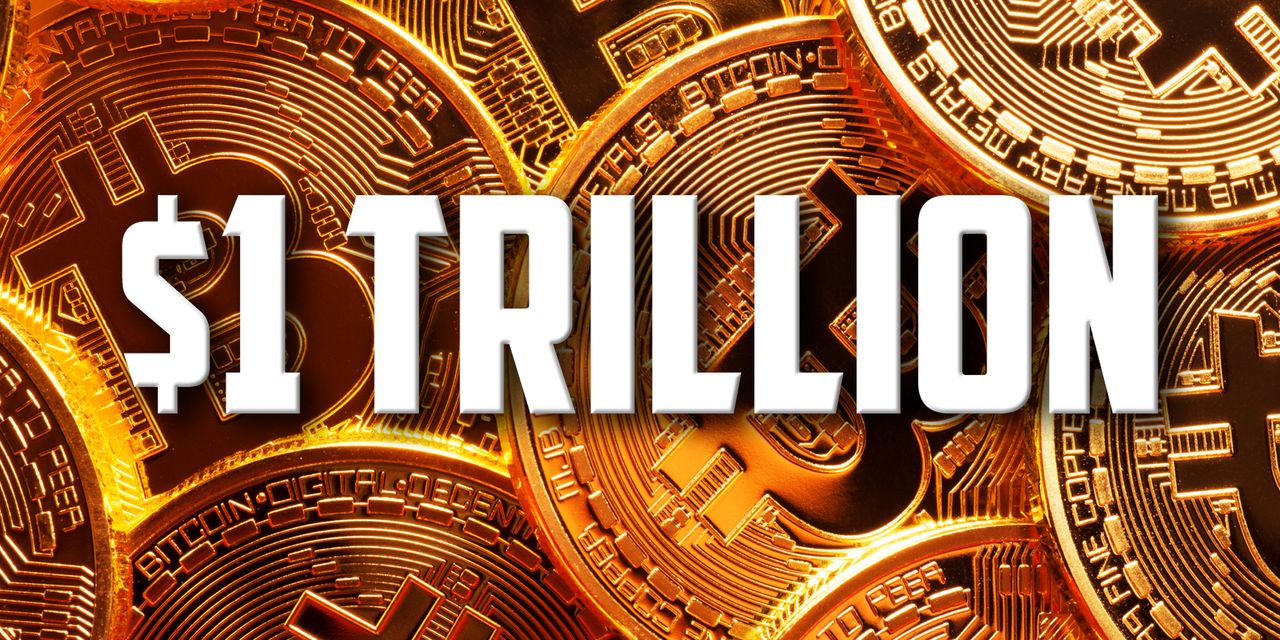 The world’s No. 1 cryptocurrency hit a record high on Friday, propelling it to a market value above $1 trillion for the first time ever.

jumped to a record at $$53,910.44, based on prices tracked by CoinDesk, briefly bringing its total market capitalization to a peak at $1,002,547,798,785, according to data from research company CoinMarketCap.com.

Bitcoin was last up 4% on Friday at around $53,734, and has surged over 85% since the beginning of 2021. By comparison, gold prices
GC00,
,
which bitcoin often competes against for investment dollars, are down nearly 6% so far this year.

is looking at a year-to-date gain of 4.5%, the Dow Jones Industrial Average
DJIA,

is up 3.3% and the Nasdaq Composite Index
COMP,

is looking at a gain thus far in the year of over 8%.

“Bitcoin price reaching the 1 trillion dollar is the most exciting news of this year,” wrote Naeem Aslam, chief market analyst at AvaTrade, in an emailed note. “This was long coming and the fact is that we are only 10X away from flipping the gold market cap on its head,” he said.

The ascent of the digital asset created just 12 years ago by a person or persons known as Satoshi Nakamoto has been attributed to growing institutional interest in bitcoin and other alternative cryptographically backed assets.

The fervor for bitcoins was given a fresh spark earlier this month when Elon Musk’s Tesla Inc.
TSLA,

said that it has acquired $1.5 billion in bitcoins in January and that it could accept the world’s No. 1 digital asset for payment in the future.

Late Thursday, Musk via a tweet, further explained his rationale for getting exposure to bitcoins, describing the decision as “simply a less dumb form of liquidity than cash, is adventurous enough for an S&P500 company.”

Other institutions including PayPal Holdings Inc. PYPL, which back in November opened up its cryptocurrency platform to all U.S. customers after conducting a more narrow rollout, has helped drive bitcoin prices sharply higher in recent weeks and months.

One point worth noting is that despite the parabolic move in bitcoins in the recent period its dominance, its share of market value compared against other alternative digital assets, is just around 60%, down from a recent peak around 70% at the start of the year.

That may suggests that other cryptos, like Ether
ETHUSD,

on the ethereum blockchain, are also drawing strong interest among buyers along with bitcoin.