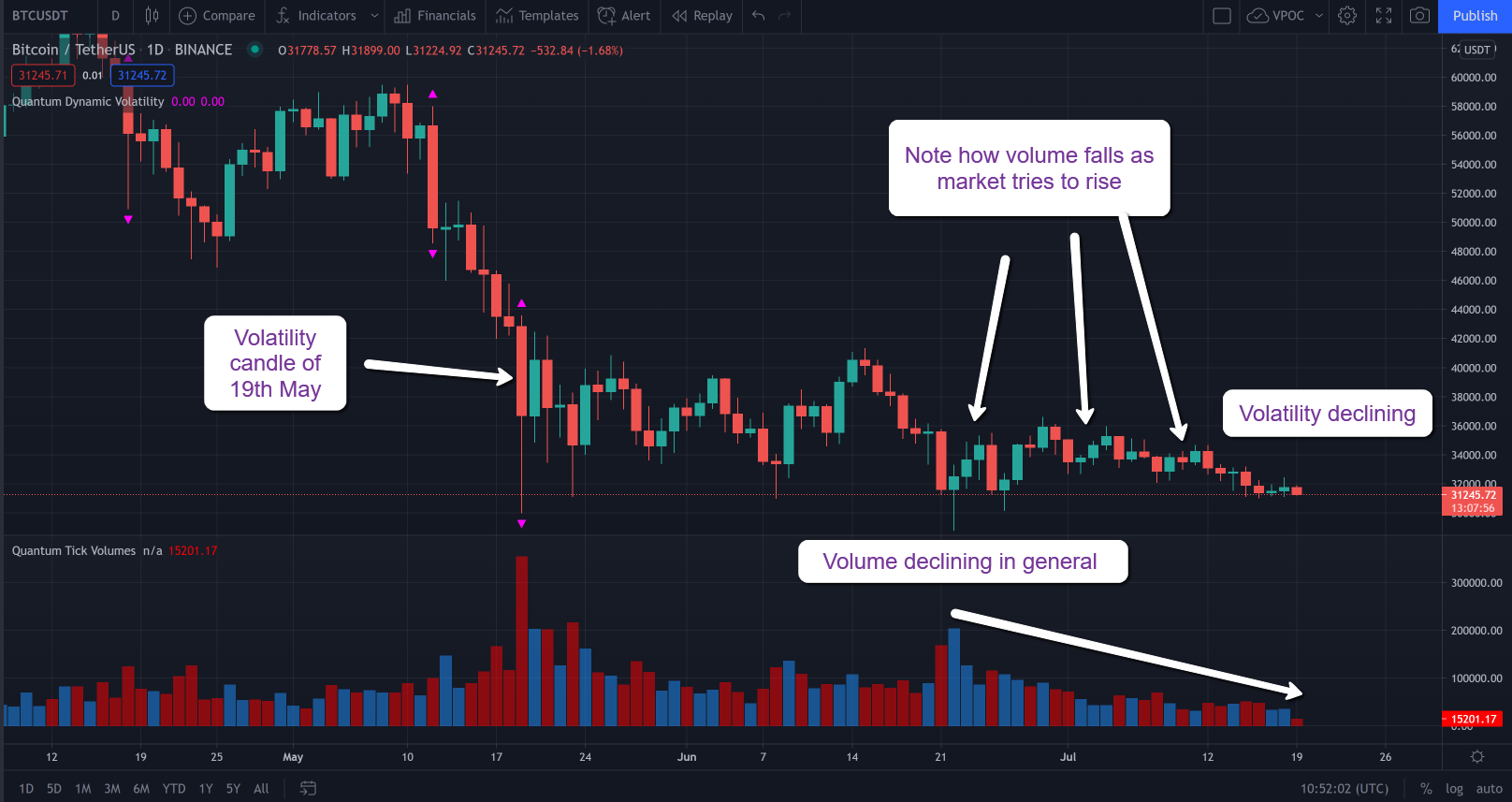 The daily chart for is one I have referenced a number of times over the last few months. It is now starting to approach key levels. In addition, the price action coupled with volume is particularly revealing for the medium term.

If we start with the candle that dominates the chart, which is the volatility candle from May 19. It resulted in Bitcoin plunging lower, only to recover on extreme volume as buyers moved in to pick up the bargains. The volatility indicator is shown with the magenta triangles at the top and bottom of the candle. It signals the price in the session has moved outside the average true range. The significance is that we can expect the price to either consolidate within the spread of the candle or reverse. In this case, we have the former. For the development of any trend we have to wait for the high and low of this candle to be breached, a point we are now approaching to the downside. However, in addition to the key level now in sight at $29,958, there are also some more worrying signs for Bitcoin and cryptocurrencies in general.

First, there is the general decline in volume and, more particularly on any rallies. Note how weak each rally has been as the market attempts to rise with falling volume. This is not a good sign for Bitcoin bulls.

Second is the lack of volatility, which has drained away completely. This in itself is worrying, as volatility is one of the key characteristics of all cryptocurrencies. So we have two major concerns, a lack of volume and volatility.

As I mentioned in a previous post, this chart is setting up as a perfect example of Wyckoff’s second law of cause and effect. In other words, the longer a market is in congestion, the greater will be any trend once the market breaks away. And this is likely to be the case here. It is the analogy of an old-fashioned clockwork spring, where the more it is wound, the greater the store of energy when it is released. What appears to be setting up here is a move to the downside, given that each significant attempt to rally fails at a lower price level. Since May 19, the first effort saw Bitcoin reach $40,000 and beyond, while in subsequent and more recent rallies $36,000 has been the limit, with $34,000 the most recent.

Volume always reveals the true picture, and until we see some sustained buying, it looks as though Bitcoin will continue to slide towards the $29, 958 area. At that point it will be a question of moving to the weekly and monthly charts for a view of where it is heading next.