Bitcoin: Nothing Will Edge Me Out

Keep calm and keep trading . Easier said than done after last week’s trading action. In times like these, emotions flare up, and in this constant field of uncertainties, one aches even more for anything that supports the need of feeling in control. The fact is that volatility and retracements of this size are typical for Bitcoin. We will illustrate this in this article.

Yes, a trillion was lost last week in the crypto space, and yes, Elon Musk’s tweets influence Bitcoin that can make one weary or doubtful. More substantial, regulatory concerns got cemented by Federal Reserve Chairman Jerome Powell calling cryptocurrencies risky and talking about the implementation of digital currency. This aligning with Chinas crypto ban and their digital yuan release planned. The treasury department was putting a cherry on top of the worry cake, stating that any US$10,000 or more transaction value shall require reporting to the IRS in the future.

These shakeup attempts are nothing new, neither are steep price declines. It is pretty common once new inventions start hitting the mainstream, prominent figures gain temporary influence with their opinions. Regulation is THE battle in the discussion about Bitcoin since Bitcoin offers decentralization. That is precisely the reason why bans and centralized digital currencies will gain neither the trust nor the attractiveness of use. In short, Bitcoin isn’t just here to stay. Bitcoin as usual, will after more significant retracements like the one last week, not just advance on a near term basis but also rise to new all-time highs in the long term. 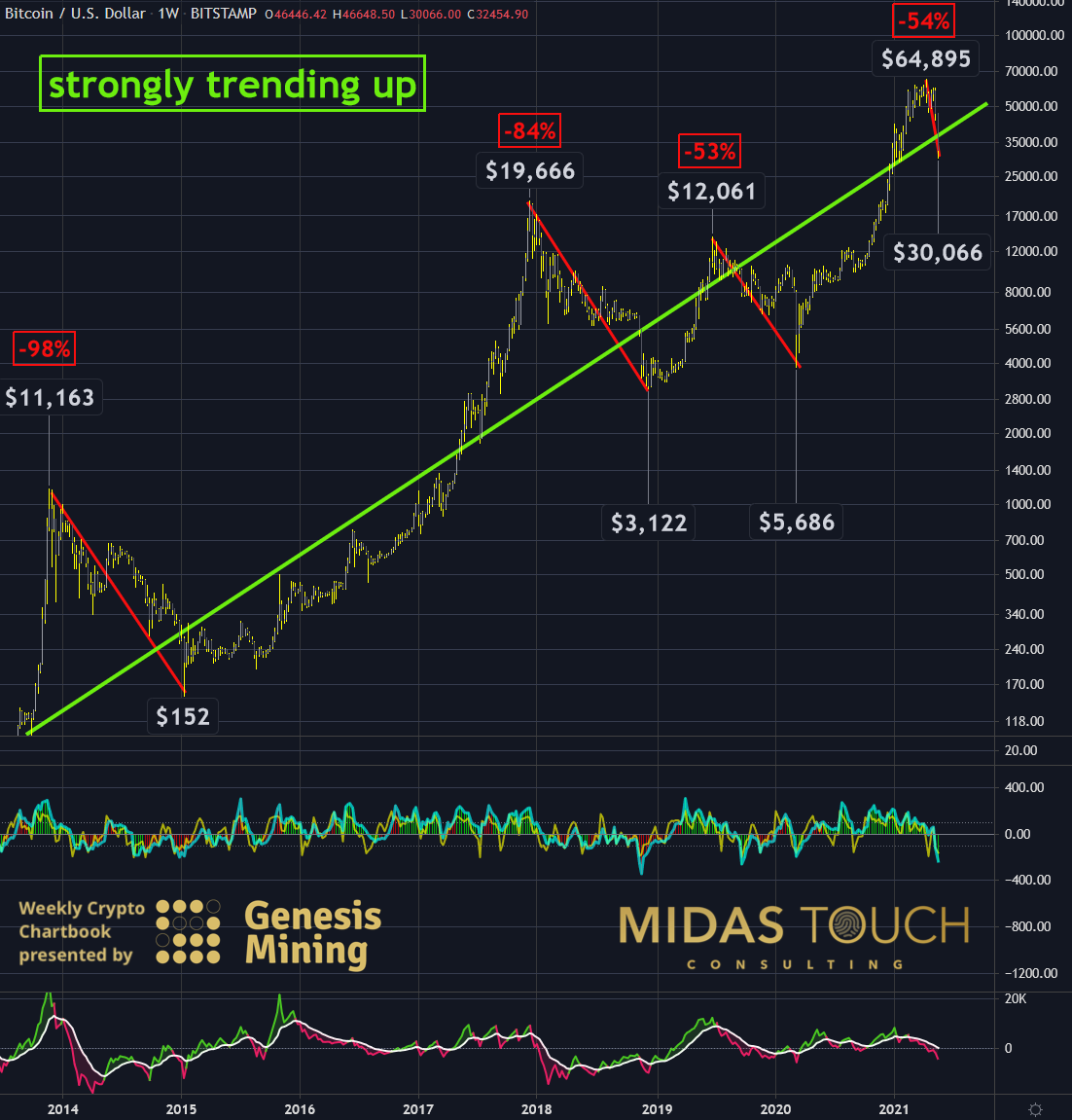 Our optimism about Bitcoin’s trend continuation isn’t based on emotional beliefs but factual past of this volatile trading instrument’s volatility. The weekly chart above shows clearly that large retracements from significant highs are standard. It also indicates that consistently old highs are taken out, and a strong directional trend throughout the years has been persistent. 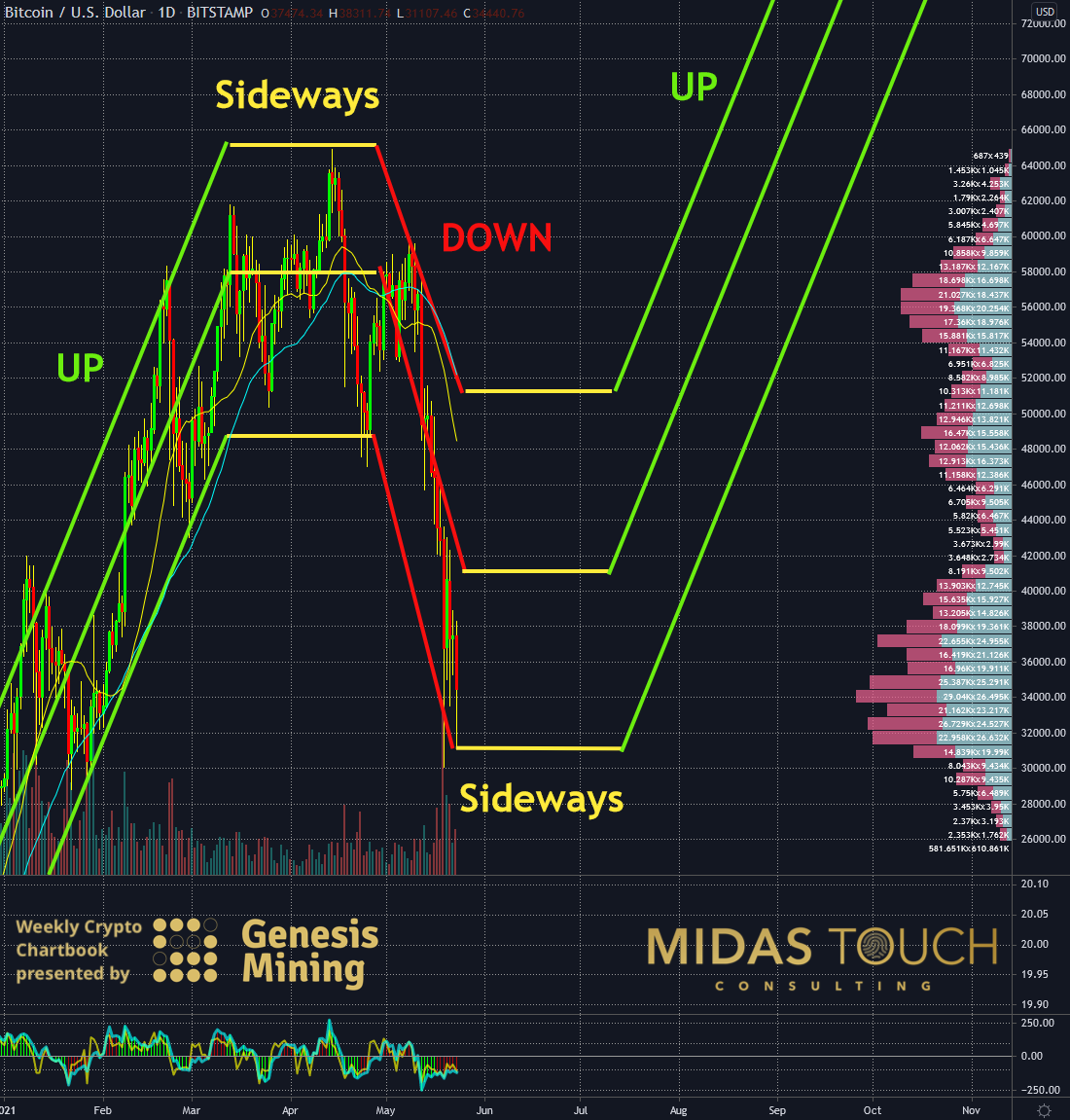 A common mistake made by market participants is perceiving the market in up and down moves. When emotions flare up in a substantial decline, one asks: “Where do I get in? What is the next support level?” Only in a “V” shaped recovery, an early entry like this is applicable. These “V” rallies are rare. The highest probability is that markets after steep declines or advances trade for a while sideways.

Consequently, one doesn’t get a trophy being first. Instead one is sitting duck in a position exposed with time risk without movement. Typically, double bottoms and long stretched-out sideways movements following. As such, we see no urgency to buy into the Bitcoin market. Instead pick Your low-risk entry spot wisely without insisting on being right (=aiming to buy at an ideal low price). 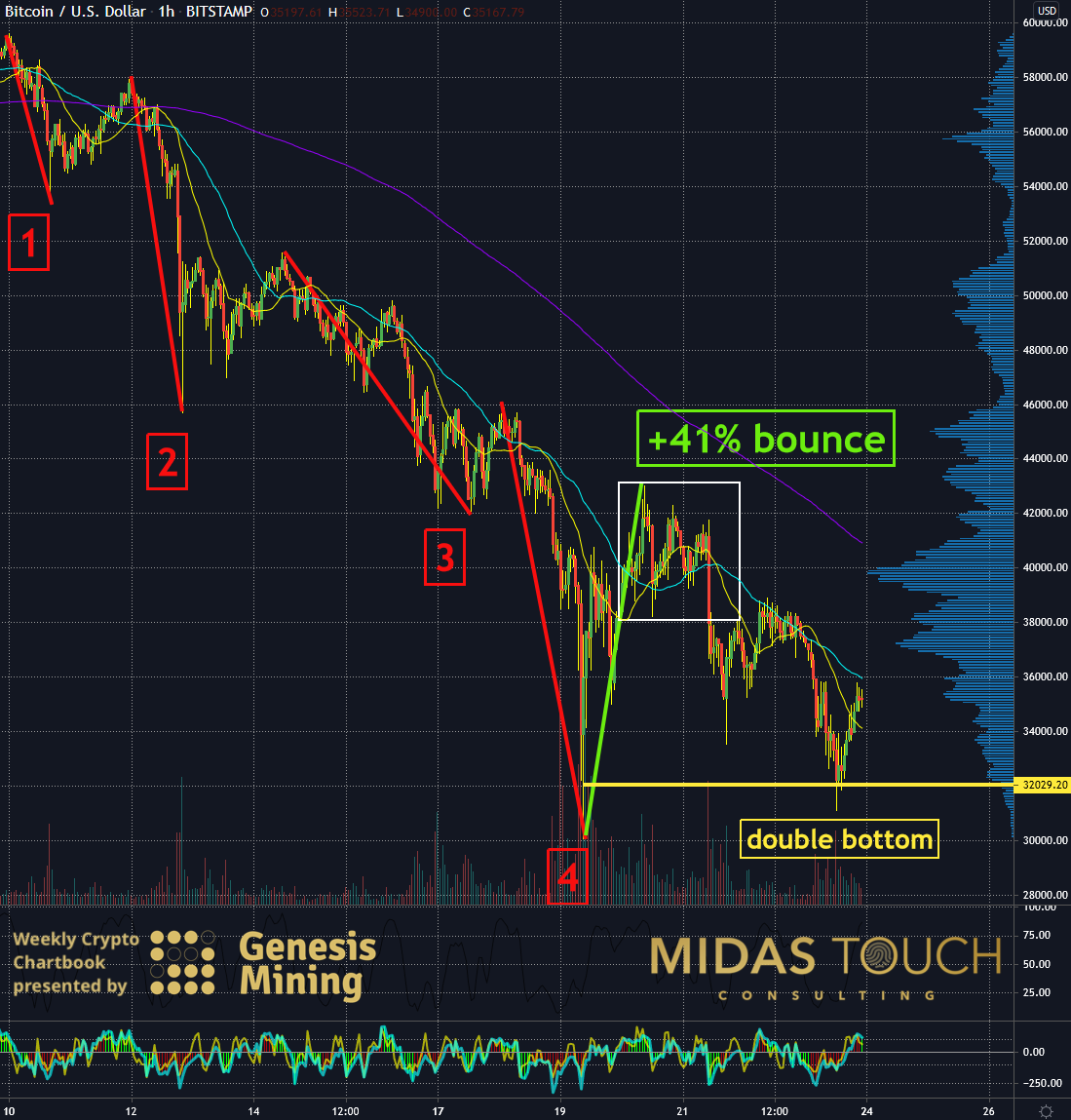 While professionals might attempt to fade extreme moves, for typical long-term investors, it is a futile endeavor to try to “catch a falling knife” on a massive down day like last Wednesday. After all, who knows if Bitcoin was to turn at US$40,000, US$34,000 or US$30,000.

We had four legs down. Price got cut in half from near US$60,000 down to below US$ 30,000. Very likely, you are emotionally exhausted trying to pinpoint the lows in this ten-day lasting high volatility sale. On top, prices reversed in a “V” shaped fashion from an intraday point of view. They gained 41%. This was another emotional roller coaster. Within the white square these accumulated energies of emotions typically get released by the novice market speculator through entering into a long trade to find him/herself exposed at high risk.

We find the very first opportunity that is reasonable on much-reduced size at the double bottom. Still, what we are looking for is an additional washout spike through the new lows set at around US$30,000. This would result in a hammer formation or other Doji-shaped daily bar. Consequently, allowing to then engage the following day with tight stops after bottom building. This setup might as well establish this week.

In principle, two things would need to happen for Bitcoin to be endangered to not outpace any and all other payment methods.

First, the opposing digital payment method would need to be limited in supply as Bitcoin is. Secondly, no central figure could be in charge of a system that is self-regulative.

Suppose citizens would lose faith in either yuan or dollar as a payment vehicle, for example, due to extreme inflation. Why would the same people find instant trust in their digital counterparts freshly offered as their replacements?

Bitcoins’ worth is principle-based. Principles being ultimate truths where one does not need to extend good faith and unearned trust but can lean on a truthful certainty. It will be this truth that will outshine all efforts to keep control.