Bitcoin: Weekend Collapse Instead Of The Traditional Rally

began a steep decline on Sunday morning, falling from $59K to $52K in a very short period. The price drop led to the liquidation of $10 billion worth of positions. The sell-off on the crypto market at the weekend was akin to a “bloodbath”. The total capitalisation of the crypto market collapsed by $200bn during the day, but at some point before the rebound, the scale of the fall reached $300bn. 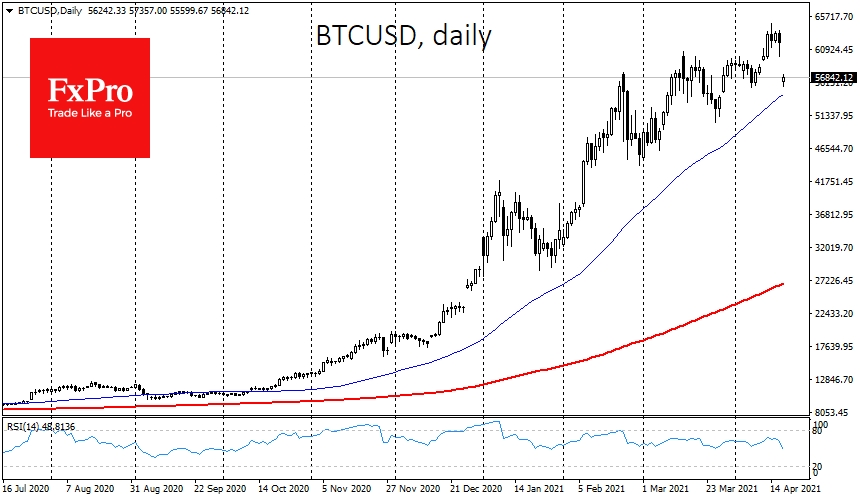 Instead of a weekend rally, the market showed the most pronounced sell-off

Instead of a weekend rally, the market showed the most pronounced readiness for a trend reversal in recent times. Of course, the market was divided into optimists and pessimists. The first considers the drawdown as a great opportunity to buy the asset on the decline. The latter believe that Coinbase's (NASDAQ:) direct listing was the final stage of the bull rally, and in the future, we have chances to see a new prolonged decline of the crypto market.

It's hard to pinpoint any main reason for the sudden fall. As often happens, a number of different factors came together to form a perfect storm. There was a dramatic drop in Bitcoin's hash rate due to a power outage in China's Xinjiang region. The power returned, but an unpleasant feeling remained as market participants once again realised the vulnerability of the entire system. Because of the drop in the Bitcoin network's hash rate, the average transaction fee exceeded $50, something not seen since 2017. It seems the theory that the price of an asset follows the hash rate has been confirmed. 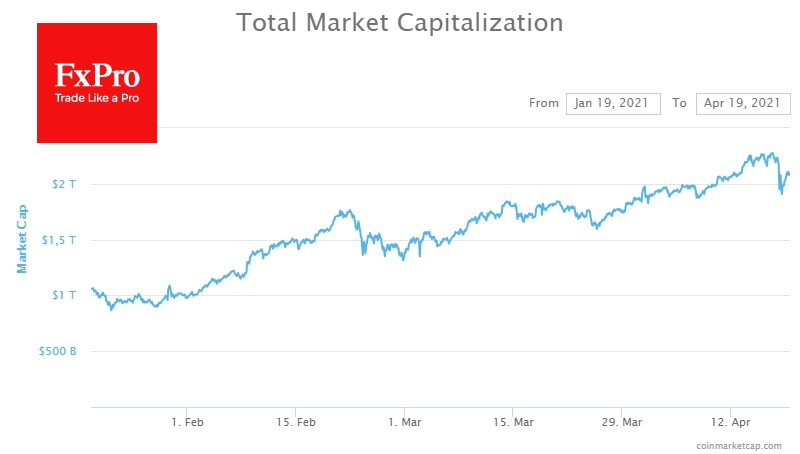 The total capitalisation of the crypto market collapsed by $200bn

The fall of the crypto market could also be influenced by rumours that the U.S. regulator may initiate an investigation into certain financial institutions that are suspected of laundering funds through cryptocurrencies.

The main question that worries all market participants without exception, regardless of whether they are optimists or pessimists, is what exactly has happened now? Is it really a good opportunity to enter the market at a big discount, or is it time to aggressively sell your assets? The weekend rally is thought to reflect the mood of the retail sector, so everyone will be waiting for the beginning of the workweek, as institutional investors will have their say.

Will large capital see the collapse in cryptocurrencies as a good opportunity to open additional positions? First of all, it is worth remembering that institutional investors are not crypto-enthusiasts. No one in the realm of big money has any emotion about any asset class, which is why they are called “smart money.”

It will be quite interesting to see if the sell-off in the crypto market becomes a trigger for similar decisions regarding the traditional market, turning it into some early “greed indicator” and a reflection of the transition into a “self-cleansing” phase.