After a long swing, crossed the $60k threshold and was close to historic highs above $61,200. Bitcoin is up 2.5% at the beginning of the week and is currently trading just below $60,000. Institutions can resolve the dispute around the round level while the new “weekend growth” pattern remains in place. 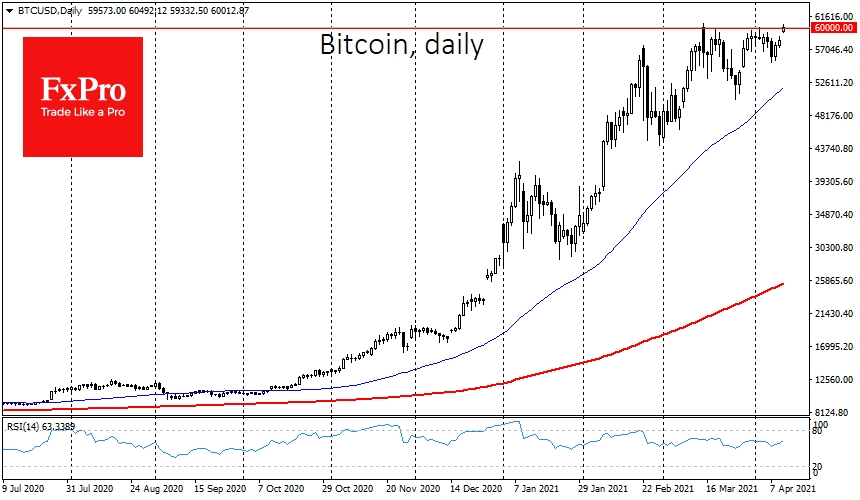 The price dynamics of the crypto market have been tuning up exclusively in a positive direction lately. This is supported by the U.S. infrastructure stimulus, which provokes the continued growth of the and the traditional market as a whole, which ultimately has a positive effect on cryptocurrencies. The broad demand for digital currencies can be seen in the decline of the Bitcoin dominance index to 54%. Continued growth in the altcoin market could put significant pressure on this indicator. During the 2018 altcoin season, the Bitcoin dominance index was at a low of 32%.

At this point, the main thing crypto market participants want to see is Bitcoin continuing to grow along with altcoins. This is necessary to avoid negative associations with the beginning of 2018 when Bitcoin's growth stopped, and the rapid rise of altcoins was soon abruptly replaced by an even more fierce sell-off. The synchronized growth in Bitcoin and altcoins is a sign of a healthy rally, so there is still no reason to point to signs of a reversal. An exit from a prolonged consolidation can quickly send the first cryptocurrency's price to $70k – the next round level.

A few bright spots appeared on the crypto market, the growth of which is impossible to ignore. We are talking about Binance Coin (), which rose by 21% in the last 24 hours and jumped by almost 70% in the last 7 days. If you take a wider period, since the beginning of 2021, BNB has grown by 1475%. One of the main drivers of BNB growth is network overload. The DeFi sector needs resources for growth, and Binance Smart Chain (BSC) can satisfy this need. Also, the price growth is influenced by the approaching listing on Coinbase. 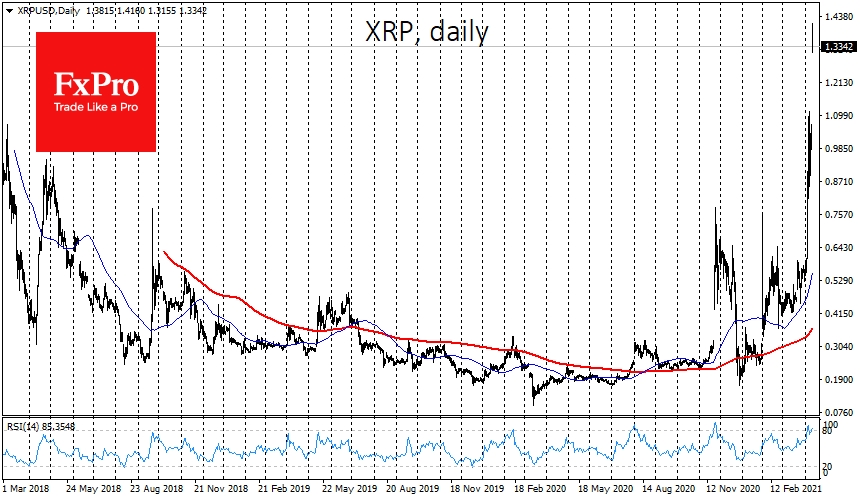 XRP remains on the front pages with an increase of 100%

remains on the front pages with an increase of 100% for the week. Not only has the token surpassed the $1 threshold, but it continues to move upwards, having already risen to $1.40. The rise in the token's price was influenced by the continued legal success of ‘s lawyers, who were able to get the SEC's request for personal financial information of Ripple executives rejected in court.

The most important technical aspect of the price rise was the news that bridges to the Ethereum and Wanchain blockchains will be opened on the XRP network within days. Thus, Ripple's management may be showing a change in its fundamental plans. The company's strategy may now be aimed not at the traditional banking sector, which very much dislikes competitors on its playing field but at the DeFi sector, which is rapidly becoming a competitor to the traditional banking system.