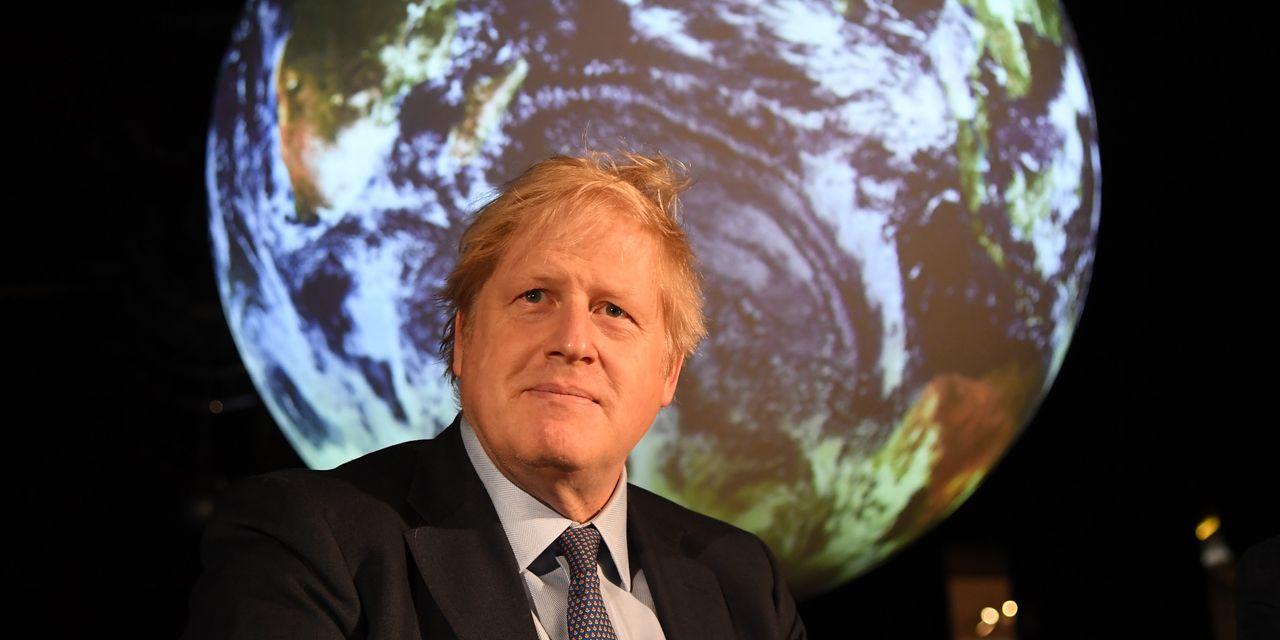 The UK economy must snap back from COVID-19 with an intentional “green recovery” that brings high-skilled jobs and a shift from traditional cars, Prime Minister Boris Johnson wrote for the Financial Times Tuesday.

The column lays out a 10-point climate plan that repeats some previously announced initiatives.

“Imagine Britain when a Green Industrial Revolution has helped to level up the country. You cook breakfast using hydrogen power
ITM,

before getting in your electric car, having charged it overnight from batteries made in the Midlands,” the Conservative leader wrote for the commentary page.

“Around you the air is cleaner; trucks, trains, ships and planes run on hydrogen or synthetic fuel. British towns and regions — Teesside, Port Talbot, Merseyside and Mansfield — are now synonymous with green technology and jobs,” he said.

Johnson has recently shared a phone call with U.S. President-elect Joe Biden that included a pledge to work closely together ahead of the next UN climate-change conference.

Read: Boris Johnson is the second world leader to receive a call from President-elect Joe Biden. Here’s what was said

“
‘We will make the UK the Saudi Arabia of wind with enough offshore capacity to power every home by 2030.’
”

In the FT post, Johnson emphasized a 10-point plan (supported in part by £12 billion in government investment potentially three times as much from the private sector) that promotes green hydrogen as an alternative to traditional fossil fuels and the advancement of carbon-capture technologies. The latter has proponents in all major industrialized nations as well as some detractors who worry it lets industry focus less on what they’re emitting and adopting measures to pollute less.

Johnson envisions the U.K.’s 250,000 green jobs to include electric vehicle technicians in the Midlands, construction and installation workers in the North East and Wales, specialists in advanced fuels in the North West, agroforestry practitioners in Scotland and grid system installers everywhere.

1. We will make the UK the Saudi Arabia of wind with enough offshore capacity to power every home by 2030.

2. We will turn water into energy with up to £500m of investment in hydrogen.

3. We will take forward our plans for new nuclear power, from large scale to small and advanced modular reactors.

4. We’ll invest more than £2.8bn in electric vehicles, lacing the land with charging points and creating long-lasting batteries in UK gigafactories. This will allow us to end the sale of new petrol and diesel cars and vans in 2030. However, we will allow the sale of hybrid cars and vans that can drive a significant distance with no carbon coming out of the tailpipe until 2035.

[Johnson had initially put a 2040 target on his goal to cut petrol vehicles and policy has evolved to keep hybrids in the mix.]

5. We will have cleaner public transport, including thousands of green buses and hundreds of miles of new cycle lanes.

6. We will strive to repeat the feat of Jack Alcock and Teddie Brown, who achieved the first nonstop transatlantic flight a century ago, with a zero emission plane. And we will do the same with ships.

7. We will invest £1bn next year to make homes, schools and hospitals greener, and energy bills lower.

8. We will establish a new world-leading industry in carbon capture and storage, backed by £1bn of government investment for clusters across the North, Wales and Scotland.

9. We will harness nature’s ability to absorb carbon by planting 30,000 hectares of trees a year by 2025 and rewilding 30,000 football pitches’ worth of countryside.

10. Our £1bn energy innovation fund will help commercialise new low-carbon technologies, like the world’s first liquid air battery being developed in Trafford, and we will make the City of London the global centre for green finance through our sovereign bond, carbon offset markets and disclosure requirements.  This plan can be a global template for delivering net zero emissions in ways that create jobs and preserve our lifestyles.

“
‘We will establish a new world-leading industry in carbon capture and storage, backed by £1bn of government investment for clusters across the North, Wales and Scotland.’
”

And, he will establish a “task force net zero” committed to reaching net zero emissions by 2050, a target previously announced.

“Green and growth can go hand-in-hand. So let us meet the most enduring threat to our planet with one of the most innovative and ambitious programmes of job-creation we have known,” Johnson concluded.

The ambitious U.K. plan is in stride with Europe’s lead globally on the climate-change challenge.

Last week, officials announced the UK’s intention to mandate climate disclosures by large companies and financial institutions by 2025, going further than recommended by the Task Force on Climate-related Financial Disclosures and the first G-20 country to take such steps.