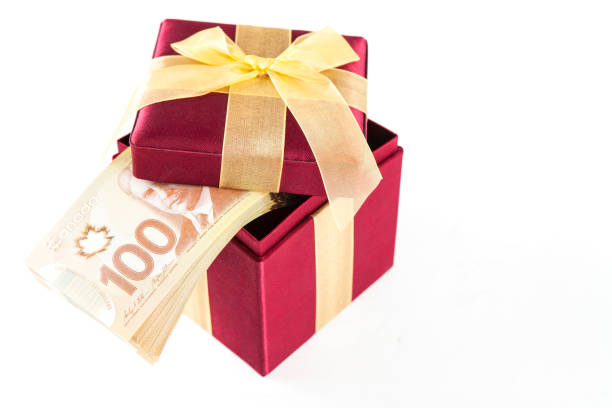 Canadian Dollar surged broadly overnight, following the strong rally in oil prices, partly due to strike in Norway which affect as much as one million barrels a day of crud oil production. The Loonie is also the strongest one for the week so far, awaiting employment data for the next move. Yen remains the weakest one together with New Zealand Dollar. Dollar is not too far away though. Some fresh selling is actually seen in the greenback in Asian session as Dollar might take on near term support against other majors before weekly close.

Technically, while the rebound of WTI from 36.50 is impressive, it’s not the less just part of the sideway consolidation pattern from 43.50. Strong resistance should be seen between 41.43/43.50 zone to limit upside of the next move. Break of 39.19 support should start another down leg back towards 35.98/36.50. Based on this view, the upside prospect of Canadian Dollar would depend more on today’s job data, as well as overall Dollar sentiments. 1.1807 minor resistance in EUR/USD would be a key to the next near term direction in Dollar and break will target a test on 1.2011 high, probably in tandem with Dollar selloff elsewhere. 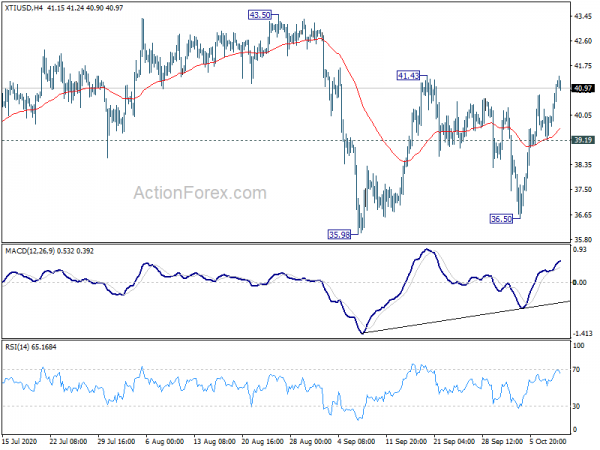 Fed Rosengren: Fiscal policy is the right tool for this time

Boston Fed President Eric Rosengren said yesterday that “fiscal policy is the right tool for this time”. It’s “tragic that it has not been deployed already”. He also noted that his economic outlook was much weaker than other Fed policymakers because additional fiscal stimulus was not counted in.

Rosengren also said the recovery from the pandemic was made more difficult due to the ” slow build-up of risk in the low-interest-rate environment that preceded the current recession”. He noted that commercial real estate firms have “gradually increased risk by taking on more leverage, which magnifies returns with good outcomes – but also magnifies losses when bad outcomes occur.

Dallas Fed President Robert Kaplan said expected the economy to shrink about -2.5% this year, which is among the most bullish forecasts by Fed’s policymakers. Though, he noted the recession has hit some sectors and some groups of people worse than others. “It will take more than just a vaccine to revive depressed industries”.

The “number one economic policy, more than fiscal or monetary policy, is mask-wearing,” he said. “If there is no fiscal stimulus, mask-wearing, following health protocols will be even more important.”

Also, he’s “skeptical about the benefits of doing more” QE. “The bond-buying needs to curtail, the Fed balance sheet growth needs to curtail” when the pandemic crisis passes. Also, it’s not “healthy” for the markets to be “addicted, or too reliant” on Fed.

Wang Zhe, Senior Economist at Caixin Insight Group said: “Overall, the economy remained in a post-epidemic recovery phase and improved at a faster pace. Supply and demand both expanded in the manufacturing and services sectors…. In the near term, there will still be uncertainties from Covid-19 overseas and the U.S. election, and the development of “dual circulation” in the domestic and international markets will continue to face challenges.”

USD/CAD’s fall accelerates to as low as 1.3180 so far and intraday bias remains on the downside. Corrective rebound from 1.2994 should have completed and deeper decline would be seen to retest this low. Firm break there will resume larger down trend from 1.4667. On the upside, though, break of 1.3340 minor resistance will flip bias back to the upside to extend the corrective rebound from 1.2994 with another up leg. 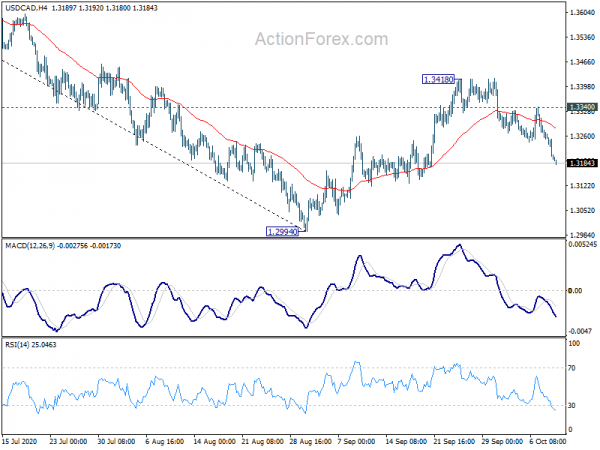 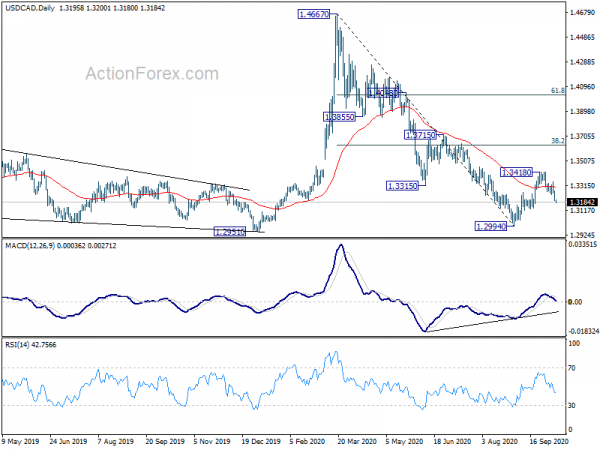