Chart Of The Day: After Bitcoin’s Recent Collapse, Time For A Recovery

Lately, has been on the receiving end of an array of negative headlines, provoking a series of panicked selloffs of the cryptocurrency.

Since early May, the flagship digital token has lost more than 30% of its value, collapsing on Wednesday to almost $30,000 intraday. That's close to a 50% nosedive from its mid-April high of over $63,000. Which just ads fuel to the already roiling debate on whether the digital token should be treated as a store of value or a means of payment.

India is also considering whether it should regulate cryptocurrencies. And in the US, a variety of federal regulators from the Office of the Comptroller of the Currency (OCC), the Federal Reserve and the Federal Deposit Insurance Corporation (FDIC) are discussing the same issue.

As if negative government scrutiny weren't enough, last week, Tesla (NASDAQ:) founder and CEO, Elon Musk, once famously pro-Bitcoin, the EV manufacturer's acceptance of the digital token as a method of payment, citing environmental concerns. There was also confusion about whether Musk would sell the company’s significant Bitcoin holdings.

However, yesterday he tweeted two emojis simultaneously—an image of a diamond next to a pair of upraised hands, signifying his continued belief in the value of Bitcoin, as a way of negating the rumors.

These recent developments might be a blow to crypto enthusiasts who see the digital coin as a deregulated form of money, uncontrolled and not manipulated by national governments. But then many of them are true believers and may simply see this all as just another speedbump on the way to higher Bitcoin prices, eventually.

We, however, have been negative on Bitcoin for some time. We for the $30K level on May 6.

Now, that the digital coin has touched down at that point, reaching our target, we believe it's time to get back in for the rebound. 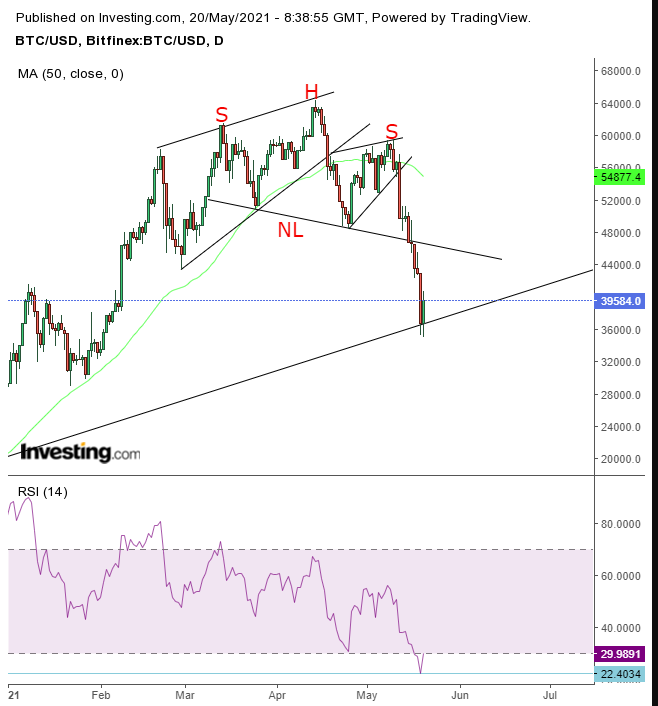 BTC found support at its uptrend line since October 2020, off which it bounced back above the 200 DMA. The RSI also bounced back, above 30.00 from 22.51, which was the momentum indicator’s most oversold level since March 2020, when Bitcoin reached rock bottom at $4,000.

From that point it catapulted upward, gaining 16 times its value in as little as 13 months.

To clarify, we don’t in fact know that Bitcoin will reach $100,000 or $1 million. All we’re saying is that the cryptocurrency has dropped significantly and now is an ideal time to enter a buy order from a risk-reward perspective.

Note, the current rally may be short-lived. It could be just a return-move to retest the H&S neckline before another leg lower.

Conservative traders should wait for a new high to extend the uptrend.

Moderate traders would wait for the price to close well above the neckline.

Aggressive traders could act at will, according to corresponding trading plan.

Trade Sample 2 – Avoiding the risk the neckline will maintain resistance