Chart Of The Day: Why Bitcoin’s Rally Won’t Last

Since mid-March, , the largest cryptocurrency by market cap, has been in a serious slump. However, recently the digital token appears to have recovered, having received a much needed boost from a variety of fundamental influencers.

On Wednesday, Tesla (NASDAQ:) CEO Elon Musk, who famously declared earlier this year the EV manufacturer would accept BTC in payment for the company's vehicles, then walked that back in May, just flip-flopped again. Yesterday, at an event hosted by the Crypto Council for Innovation, he hinted that his Palo Alto, California-based company might be rethinking its policy on Bitcoin as a payment option.

At the same event, Cathie Wood, head of ARK Investment Management, defended Bitcoin as an inflation hedge during a panel discussion that also featured Jack Dorsey, CEO of Twitter (NYSE:) and Square (NYSE:), defending the cryptocurrency as well.

Bloomberg also weighed in, citing a technical signal as reason to be bullish on the Bitcoin rally. The news right now may be supportive of Bitcoin, but we're bearish. Here's why: 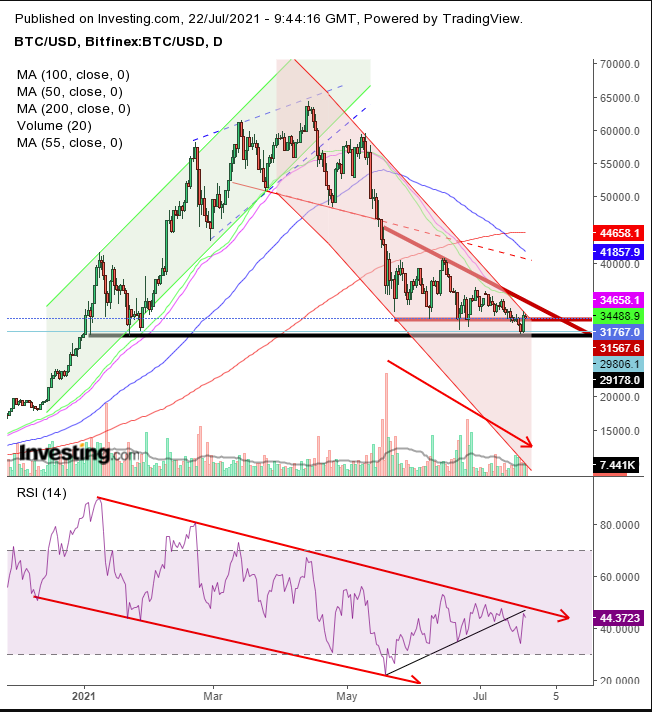 BTC/USD price found support at the January low, the $29,000 level we’ve been tracking, having reported it it as our line-in-the sand. As we've previously said, if crossed, we’d turn decidedly bearish on the digital currency, since at that point there's no safety net of support remaining till quite a significant level lower.

In fact, though the digital token just passed $32K at time of writing, we consider yesterday’s surge to be simply a return move retesting the descending triangle. That's a pattern that demonstrates sellers are gaining on buyers.

Once the bottom gives way, it’s a signal that all demand has been overcome by panicked—and short—sellers. That move will presumably trigger long stop losses and prompt a new wave of short selling, pushing the price violently downward.

The descending triangle placement within the supply-demand chart is telling. It's positioned right below a H&S top, forced down by a Death Cross, when the 50 DMA fell through the 200 DMA.

Since then, the 100 DMA was dragged below the 200 DMA, forming a triple bearish pattern—each MA is positioned below a longer one. This demonstrates that prices are not merely falling in a narrow period but rather descending across multiple average comparisons.

A downside breakout of the triangle, completing the bearish structure, would obliterate the January low, before heading to $22,000.

Both the volume and the RSI provide overt negative divergences. The latter broke its short-term uptrend in momentum since May, while turning lower after returning to the top of its falling channel, forecasting a downfall.

Conservative traders should wait for the price to close below $29,000 before risking a short position.

Moderate traders could risk a short if the price closes below the $30,000 psychologically round key level, confirming that the pattern remains a bearish stronghold.

Aggressive traders would short at will, provided they read and understand the risks and have a sound trading plan. Here’s an example: