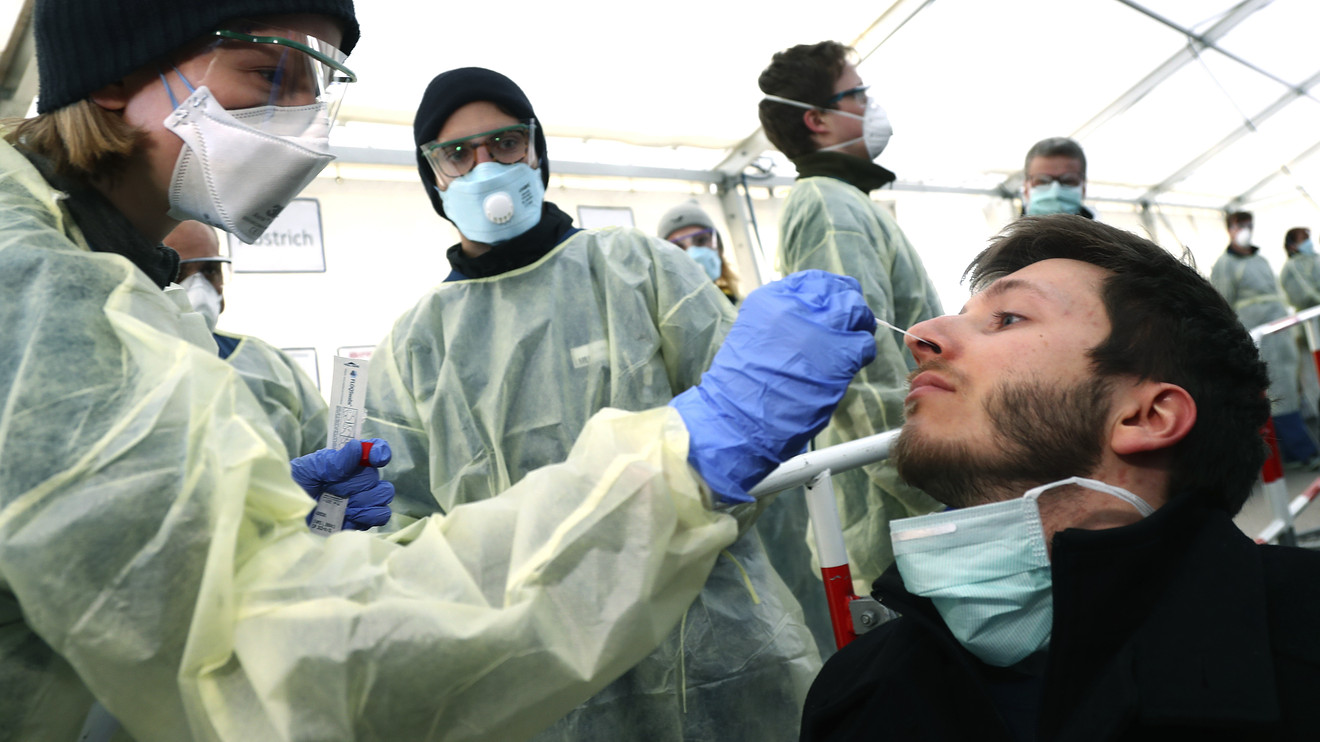 The number of confirmed cases of the coronavirus illness COVID-19 worldwide rose above 24.5 million on Friday, while the U.S. tally neared 6 million, and the White House unveiled a plan to acquire 150 million rapid tests from Abbott that received emergency use authorization on Thursday.

The $5 test can produce a result in 15 minutes, potentially easing a bottleneck in testing that has left patients waiting up to two weeks for results, a delay that renders them useless. The government will pay $750 million for the tests. The move comes after days of confusing messages from the U.S. Centers for Disease Control and Prevention on testing, after it changed guidelines to exclude tests on asymptomatic patients, who are understood to play a key role in spreading the virus.

CDC head Robert Redfield tried to walk that change back on Thursday, after an outcry from doctors and scientists and a report that the change was pushed by White House officials and not CDC scientists. The wording of guidance offered on the CDC website has not changed though.

Tom Frieden, a former head of the CDC, told MSNBC that the agency has undermined trust in a way that is indefensible.

“The CDC is a technical institution and what we’ve heard from Washington is, ‘Oh these were decisions made at the White House Task Force’ — come again?” he said. “It’s very disappointing.”

The agency needs to change its website and be clear, he said.

Meanwhile, four people who attended the Republican National Convention in Charlotte this week have tested positive for COVID-19, the Washington Post reported, citing local county government officials. Scenes of Trump supporters gathering closely on the White House South Lawn for his acceptance speech late Thursday, most without face masks and failing to socially distance, have raised concerns that more people will test positive in the coming days.

In his speech, Trump promised his administration would produce a vaccine by year-end, even though Phase 3 trials have just begun and little data has been released yet. Trump also praised his government’s efforts to manage the pandemic, which has been widely criticized. He did not mention the latest U.S. death toll which rose above 180,000 on Thursday, according to data aggregated by Johns Hopkins University.

• Concerns are growing that Louisiana, which had one of the highest numbers of confirmed cases of COVID-19 before Hurricane Laura hit this week, will see a surge in new cases as many residents fleeing the massive storm left in crowded buses without face masks. Louisiana has more than 145,000 confirmed cases and 4,874 fatalities, the Johns Hopkins data shows. Its per capita death rate stands at 104 per 100,000 people, compared with the overall U.S. mortality rate of 55.27 per 100,000 people, which is fourth highest in the world after Peru, Chile and Brazil.

• Universities continue to count new infections at alarming rate, but one school says it avoided a major outbreak in one of its dorms, by testing sewage. The University of Arizona says when a sample tested positive, it was able to test all 311 people who lived and worked there and discovered two asymptomatic cases, who were quickly isolated, the Washington Post reported. Richard Carmona, a former U.S. Surgeon General who is working with the university on returning students safely, said the early detection allowed it to move quickly. “We jumped on it right away, tested those youngsters and got them the appropriate isolation where they needed to be,” he said at a news conference, the paper reported.

See now: Why some say shaming college students is ‘unfair and counterproductive’ to preventing COVID outbreaks

• The U.K. government is pushing for office workers to return to work, insisting workplaces are safe enough. Transport Minister Grant Schapps told Sky News that employers should have taken measures to ensure office spaces are safe. “The vast majority of employers just want to get their businesses back up and running, they want to do the right thing, and many will have found that actually home working can work for some of their employees,” he said, before adding that there was a limit to remote working.

• Indonesia reported more than 3,000 new cases on Friday for the first time since the start of the outbreak, the Guardian reported. The country of more than 300 million counted 105 deaths after outbreaks in three factories in West Java that the provincial governor blamed on workers not following safety measures. A plant owned by Japanese car maker Suzuki had 71 workers test positive, while more than 200 tested positive at a plant owned by Korea’s LG Electronics.

The global tally for confirmed cases of COVID-19 stands at 24.5 million, while the number of deaths stands at 832,918, according to the Johns Hopkins data. Just over 16 million people have recovered.

During her summer news conference, German Chancellor Angela Merkel expressed fears that the pandemic will worsen as temperatures drop. She and state governors have agreed to new measures to curb the spread of the illness, including a fine for not wearing a mask, according to the New York Times. Germany has had 240,598 confirmed cases and 9,291 deaths, according to Johns Hopkins.

failed to include government financial support data in patents filed over the last 10 years, in violation of a federal law approved in 1980, the Washington Post reported, citing a report from activist researchers. Moderna, which was founded in 2010, is one of the front runners in the race to develop a COVID-19 vaccine and is currently conducting Phase 3 trials involving thousands of patients, funded by government bodies and international groups. The company has never had a vaccine approved.

The report by Knowledge Ecology International (KEI) says the company has not been complying with the Bayh-Dole Act by failing to mention the funds it has received from agencies including Defense Advanced Research Projects Agency, DARPA, and the Biomedical Advanced Research and Development Authority, or BARDA. The act requires that companies disclose those funds in patent applications and patents, to better help government agencies track their spending and whether they are entitled to royalties when products are approved. Moderna did not respond to a request for comment, the paper said.

Separately, Moderna said it’s in talks with the Ministry of Health, Labour and Welfare of Japan to potentially sell 40 million or more doses of its COVID-19 vaccine. Under the terms of this arrangement, the vaccine would be supplied by Moderna and distributed in Japan by Takeda Pharmaceutical Co.
TAK,

beginning in the first half of 2021, if the vaccine receives regulatory approval.

Americans regained a small amount of confidence in the path of an economic recovery in late August, but they are still quite pessimistic about how long it will take to get back to normal, a new survey showed, MarketWatch’s Jeffry Bartash reported.

The final consumer sentiment survey in August rose to 74.1 from a preliminary reading of 72.8, the University of Michigan said Friday. It was also up from July’s 72.5 score.

The survey is still near a pandemic low, however. The index bottomed out at 71.8 in April, just two months after it had reached a nearly two-year high of 101.

A fresh outbreak of the coronavirus during the summer dampened the spirits of Americans in July just as they were starting to feel a bit more optimistic. Consumers showed little change in their attitude in August about how the economy is doing right now

“Although half anticipates an improved economy, when asked to judge the performance of the economy, 62% judged that the overall conditions in the economy could be best described as unfavorable,” said Richard Curtin, the chief economist of the sentiment survey.

Separately, Americans increased their spending in July for the third month in a row, but at a much slower pace in a sign that an economic rebound from the coronavirus pandemic has lost some steam.

After a record collapse in March and April, consumer spending roared back in May and also grew sharply in June. Yet a fresh outbreak of the coronavirus hurt the economy last month and sapped the recovery of its earlier momentum.

Incomes rose 0.4% largely because of government payments to businesses to keep employees on payrolls. “Quite a bit of the government relief still available in July ended in August, so next month might not look quite as bright,” said chief economist Chris Low of FHN Financial.

See now:The Fed might never hike rates again. Here are growth stocks for the long run, according to one strategist

announced a reorganization and will offer voluntary job cuts to 4,000 workers in the U.S., Canada and Puerto Rico. Voluntary layoff packages will be offered to those who have a most-recent hire date on or before Sept. 1, 2017. The company said a similar program will be offered across many international companies. Overall global severance programs are expected to cost the company between $350 million to $550 million.

reported a narrower-than-expected second-quarter loss and sales that beat Wall Street expectation. Same-store sales rose 13%, led by a 95% online sales increase, Gap said. The retailer ended the quarter with $2.2 billion in cash and equivalents, compared with $1.1 billion at the beginning of the quarter. “Gap Inc. believes it is in a solid financial position to navigate through the ongoing pandemic and continue investing in its business,” the company said.

swung to a fiscal second-quarter profit and reported sales that were well ahead of expectations as consumers bought up sweatpants and other athleisure wear during the pandemic. Same-store sales increased 79.2%, with e-commerce sales more than tripling, up 212.2%, and brick-and-mortar comparable sales up 65.2%. “Our nearly 80% comparable sales results were driven by multiple factors, including pent-up consumer demand, temporary and permanent competitor store closures and government stimulus money,” said Mike Longo, chief executive of Hibbett. For the second half of fiscal 2021, Hibbett expects comparable sales up in the mid-single digits and EPS in the range of 85 cents to $1.

• Nio Inc.
NIO,
,
a Chinese manufacturer of autonomous vehicles, announced an offering of 75 million American depositary shares, joining the many companies issue equity and debt during the pandemic. Nio will grant the underwriters of this offering a 30-day option to purchase up to 11.25 million additional American depositary shares. Nio intends to use the proceeds from the offering “ mainly to increase the share capital of and the company’s ownership in Nio China,” as well as to repurchase equity interests held by some minority shareholders of the Nio China business and conduct research research into autonomous-driving technology.

reported second-quarter adjusted profit that was well above Wall Street expectations and said its online sales had tripled during the pandemic. Ulta said its same-store sales fell nearly 27%, but e-commerce sales increased more than 200%. “While the pandemic continues to affect our business, we are encouraged by improving trends,” Chief Executive Mary Dillon said in a statement. Sales trends “have continued to improve, with comparable sales down in the mid-single digit range for the first three weeks of August.” Despite the recent improvement in sales trends, “it will take time to fully return to pre-COVID levels … we expect sales will continue to be challenged for the rest of the year,” Dillon said. Ulta did not provide guidance but said it expects costs between $35 million and $40 million related to PPE and COVID-19 in the second half of fiscal 2020, and capital expenditures between $180 million and $200 million, compared to a previous expectation of between $200 million and $210 million.

headed toward a record following an earnings beat, forecast increase and announcement of a new co-CEO. The human-resources cloud-software company raised its guidance on the back of the strong second quarter. “As a result of our strong Q2 performance, we are raising our fiscal 2021 subscription revenue guidance to a range of $3.73 billion to $3.74 billion,” Chief Financial Officer Robynne Sisco said. Workday separately announced that Chano Fernandez had been promoted to co-CEO to pair with Aneel Bhusri, who has operated as sole CEO since his former co-CEO, co-founder David Duffield, departed daily operations to become chairman. Fernandez was previously co-president with Sisco, who will be the sole president and chief financial officer moving forward.