Crypto Adoption in Russia, Ukraine, and Belarus By DailyCoin 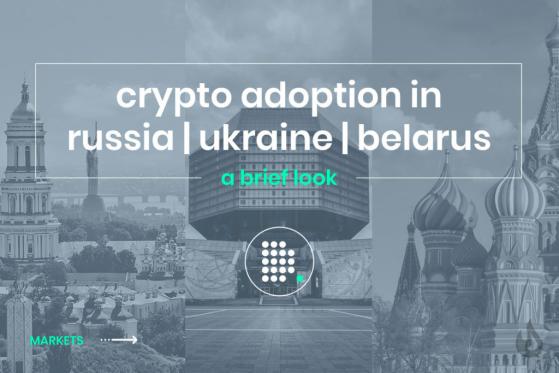 Russia, Ukraine, and Belarus are championing the adoption of cryptocurrencies in Eastern Europe.

Presently, the region is ranked as the fourth-largest by volume of cryptocurrency traded, but Russia and Ukraine are among the top crypto nations in the world, with transaction volume numbers of $24 billion annually.

Belarus, a landlocked country in Eastern Europe, shares borders with Russia, Ukraine to the south, and Poland to the west. With a population of 9.4 million, it is the 20th most populous country in Europe.

The county is on its way to becoming a major digital currency hub in Eastern Europe, having granted legal status to cryptocurrencies in 2018.

is used regularly in the country. A local non-profit even distributed Bitcoin grants to people who had lost their jobs during national protests last September.

In November 2020, Belarusbank, the nation’s largest lender, entered into a partnership to create a Bitcoin buying service for customers in Russia and Belarus with WhiteBird, the only legal crypto market operator in the former Soviet republics, which is also based in Belarus.

Ultimately the bank wants to expand this service to customers in neighboring countries like Tajikistan, Moldova, Kazakhstan, Azerbaijan, etc. In the coming months, it will add and Ether to the service.

Belarus is clearly poised to become the leading cryptocurrency hub in the region.

Russia is already a leading cryptocurrency market in the world with annual transactions north of the $15 billion mark.

Increasing public distrust of Russian institutions is fueling the high rate of cryptocurrency adoption in the country. Incessant cases of bribery and corruption in recent times have demolished confidence in the local banking industry.

With an existing affinity for e-payments (some 46% of Russians already used an e-Wallet for fiat currency in 2014), making the switch to cryptocurrencies was a seamless process for many Russians.

With this new legislation on top of nationwide adoption, the Bitcoin market in Russia is set to skyrocket in the coming years, its effect sure to spill into other countries in the region.

Ukraine is a brewing hotspot for cryptocurrency adoption with a tech-savvy population and a growing community of blockchain developers.

The county’s annual crypto transaction volumes are around $8 billion, but the gravitational-strength forces pulling all of Eastern Europe toward digital currencies are just as strong in Ukraine.

A problematic stock market drives investor attention to cryptocurrency speculation. Regulation on cash transfers in and out of Ukraine are a bit harsh, leading Ukrainians to favor the decentralized methods of cryptocurrencies.

And the unstable political situation in Ukraine makes the switch from fiat currencies to cryptocurrencies seem like not such a risky move. Trust in Ukrainian banks is at an all-time low, and the crippling effects of the Covid-19 pandemic have spurred young Ukrainians looking to augment their earnings to embrace cryptocurrencies.