DeFi Could Change The Crypto TOP-30

bounced after breaking through the most important technical and psychological level of $10K. Nevertheless, this impulse is clearly not enough to develop a confident market reversal. At the beginning of the working week, Bitcoin traded around $10,100, showing almost zero dynamics in the last day. As it dropped below $10K, the trading volume jumped by 150% compared to levels during the sideways trend.

Thus, the market experienced a large-scale transfer from one hand to another: one side fixed short-term profits, while others entered the market with a 20% discount from the levels of August. The Crypto Fear & Greed Index for Bitcoin and the largest cryptocurrencies finally dropped sharply, reflecting what is happening in the crypto market and once again confirming its relevance. 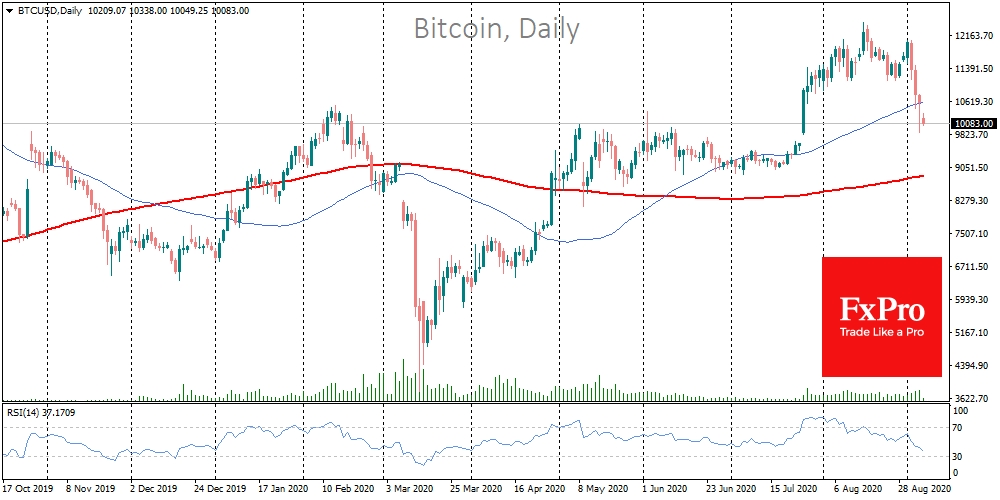 From a broader perspective, we are witnessing that extreme uncertainty and turbulence remain side-by-side with the financial market. At the end of last week, the stock market showed a decline that was associated with the rebalancing of portfolios. The technology sector took the hardest hit, which is quite logical given the impressive growth in recent months. Bitcoin is now also in the portfolios of most investors, so such adjustments will inevitably have an impact on the benchmark cryptocurrency.

It is logical to see that the most impressive decline was shown by coins from the DeFi sector. After such a rapid increase, this scenario was inevitable. The main question now is: will the growth return? If the DeFi coins are purely speculative assets with the properties of a bubble, then a quick return to growth would be a big topic.

However, we are witnessing now that DeFi crypto assets are the first cryptocurrencies to recover after a decline. It is quite likely that deferred demand is now in force, and investors who missed the price spike are entering the market. In the medium term, however, there is a good chance for several more cycles of significant growth.

It is highly likely that in the close future this sector will face restrictive factors, including regulation or technical aspects. Also, we should not rule out scenarios with hacker attacks. During the boom in ICO, news about multimillion hacking attacks came with almost the same frequency as the news of successful rounds of fundraising. In this case, the billions of dollars blocked in DeFi applications is also a very attractive target.

DeFi coins show an increase in popularity among the whales in the over-the-counter markets. The Block reports that the trading volume of the leading DeFi coins yEarn Finance (YFI), Synthetix () and Compound () has increased 8 times since the beginning of the year. It is highly likely that in the medium term, these coins will provoke volatility in the crypto market.

The sector of decentralized financial applications is the new star of the crypto market, while the leaders of the previous boom now show some fatigue, which negatively affects their price prospects. By the end of 2020, the TOP-30 list of cryptocurrencies may show serious changes in their composition.