Did John McAfee Put A Dead Man’s Switch On Ethereum?

Despite rumors of an automated data leak, such a plan seems unlikely. 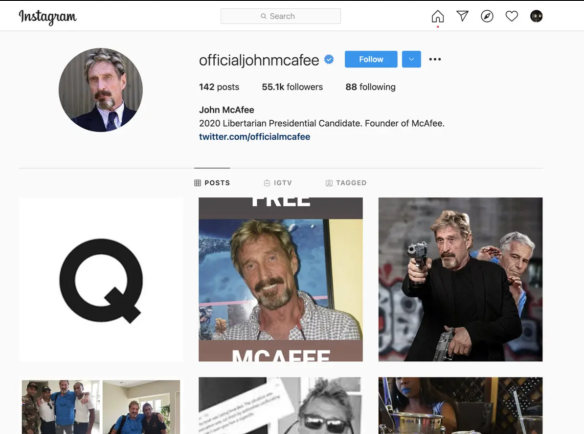 The letter “Q” was seemingly a reference to the conspiracy group QAnon. That led some to believe that McAfee’s death had triggered a system that would leak secret government information.

Those who were able to access the image claimed that the image contained an Ethereum address key. However, those claims were incorrect. The string began with FBMD, indicating that the text was Facebook (NASDAQ:) metadata, as is standard across the site.

Though some have suggested that the metadata contained a blockchain key in hexadecimal code, there does not seem to be any meaningful data in the string when it is converted from hex code.

Did McAfee Use Ethereum?

Others have drawn attention to recent activity concerning McAfee’s WHACKD token on the Ethereum blockchain.

McAfee launched the WHACKD token in November 2019. At that time, he expressed the belief that he would be killed by government agents under the guise of suicide, similar to conspiracy theories that emerged around the death of Jeffrey Epstein in 2019. 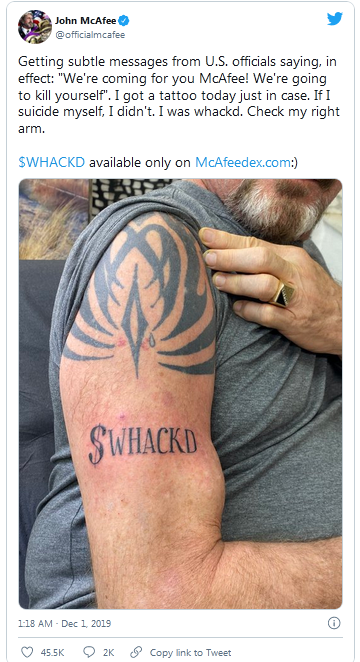 Now, SwitchDex’s token tracking contract for WHACKD has begun to receive funds after long periods of inactivity. Some have speculated that these transactions could have been triggered by McAfee’s death.

However, given that the contract is receiving incoming funds, the relevant transactions were not necessarily carried out at McAfee’s request. It is possible that McAfee’s death simply encouraged WHACKD token holders (or SwitchDex itself) to move funds.

It should also be noted that although the contract’s name is “Epstein,” this simply seems to be the name that SwitchDEX chose for its contract, not an indication of any information on Epstein.

Though it is conceivable that the transactions contain hidden data or were carried out in a pattern, this does not seem to be the case.

Blockchains Are Impractical for Data Storage

There is another more straightforward reason that the Ethereum blockchain is unlikely to be involved in a data leak.

Most blockchains cannot host large amounts of data. McAfee claimed that he had 31 TB of data on government corruption. Ethereum’s ledger, however, contains less than half a terabyte of data.

Though McAfee could use an Ethereum transaction to broadcast a link to the true location of his data leak, doing so would be an unnecessary intermediate step toward whatever method of distribution he supposedly chose to use.

In the unlikely event that McAfee did intend to leak information upon his death, blockchain would certainly not make up his entire plan.