Dogecoin creator Billy Markus has updated his “Crappy Dogecoin Doodles” by adding a new non-fungible token (NFT) to the collection.

Today, Markus announced the fifth token in the series, one that features a hastily drawn Shiba Inu dog lying in a field. “For this week, I attempted to draw the Doge with her paws crossed from memory. This was the result,” Markus noted on Rarible. 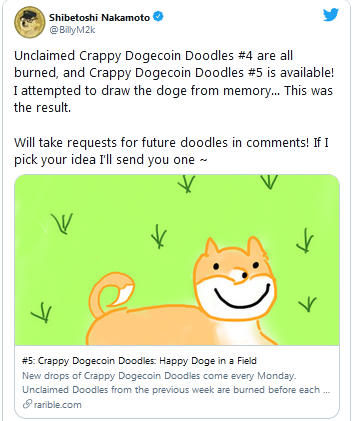 420 copies of the token will be up for auction until the sale ends next week. Markus has noted that unclaimed doodles in the “Crappy Dogecoin Doodle” series are burned before each new drop to create scarcity. Presumably, this will make it easier for original buyers to resell the NFTs that they originally bought from Markus.

Markus’ Doodles Have Become A Hit

Markus began to publish “Crappy Dogecoin Doodles” in June. Though the doodle was meant to be a test-run for more serious NFTs, such as Capped Dogecoin, demand was higher than expected, and the token sold for 1500 times Markus’ asking price.

To date, Markus has created a total of 39 Dogecoin-themed NFTs—some with more refined digital artwork than others.

Dogecoin does not have any capability to handle NFT tokens. As such, Markus’ tokens are minted on the Ethereum blockchain and sold through Rarible, a popular NFT token marketplace.

Markus has also commented on complaints against NFTs. Recently, critics argued that NFTs harm the environment. Markus countered that NFTs “simply piggyback” on existing blockchains and that there is “barely any additional waste” from NFT transactions.

Markus says that he will continue to create Doge-themed NFTs as long as there is demand for them within the community.