Dollar Extends Fall after FOMC, BoE and SNB Next 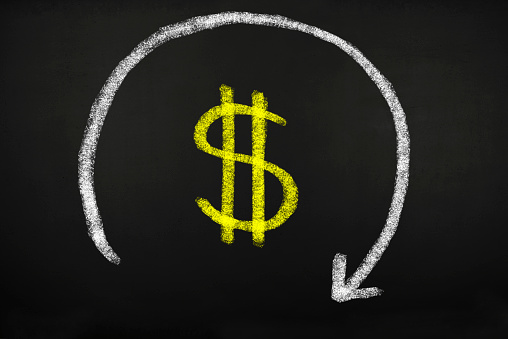 Dollar’s decline continues in Asian session today, with mild risk-on markets in the background. FOMC rate decision overnight triggered little reactions in the markets, and the greenback holds on to the near term trajectory. Sterling is currently the strongest one, awaiting BoE rate decision, and more news regarding Brexit trade talks. New Zealand Dollar is the next strongest today, after better than expected GDP rebound.

Technically, Sterling pairs could be a focus for the rest of the week. GBP/USD is having another attempt to break through 1.3539 resistance decisive, yet, there is no conviction. Attention will also be on 140.70 resistance in GBP/JPY and break will affirm underlying upside momentum of the Pound. EUR/GBP and GBP/CHF are staying around mid-point of recently established range. We’ll are anticipating a breakout for now, until something firm about Brexit trade agreement happens.

NASDAQ hit new record after FOMC, on track to 12901 projection

US stocks ended mixed overnight with NASDAQ closed at another record, but DOW edged down slightly. Fed left monetary policy as widely expected. FOMC noted, “path of the economy will depend significantly on the course of the virus,” and it pledged to “be prepared to adjust the stance of monetary policy as appropriate”. The commitment to maintain accommodative policy supported overall market sentiment. Additionally, there’s optimism that Congress inched close to compromising on a USD 900B fiscal stimulus package.

Dollar index holding on to 90 support, but risks on the downside

Dollar index is still holding on to 90 psychological support for the moment, even though the greenback is trading as the worst performing one for the week. The level coincides with 38.2% projection of 102.99 to 91.71 from 94.30 at 90.00. Though, as EUR/USD has already taken out 1.2177 resistance, selloff in Dollar could take off any time.

In the bearish case, next downside target will be 61.8% projection at 87.34. Though, rebound from current level, followed by break of 91.23 resistance should indicate short term bottoming and bring rebound. Down trend extension would then be delayed to the early part of Q1.

New Zealand GDP grew 14.0% qoq in Q3, stronger than expectation of 12.8% qoq. That’s also the largest quarterly rise on record. However, on an annual bases, GDP dropped -2.2% over the year. Growth in Q3 was not enough to fully makeup for the economic impact of the coronavirus pandemic and the responding measures.

AUD/USD’s rally resumes by breaking 0.7578 temporary top. Intraday bias is back on the upside for 0.7635 key long term fibonacci level. Decisive break there will carry larger bullish implications. Next target will be 61.8% projection of 0.5506 to 0.7413 from 0.6991 at 0.8170. On the downside, break of 0.7507 support is needed to indicate short term topping. Otherwise, outlook will remain bullish in case of retreat. 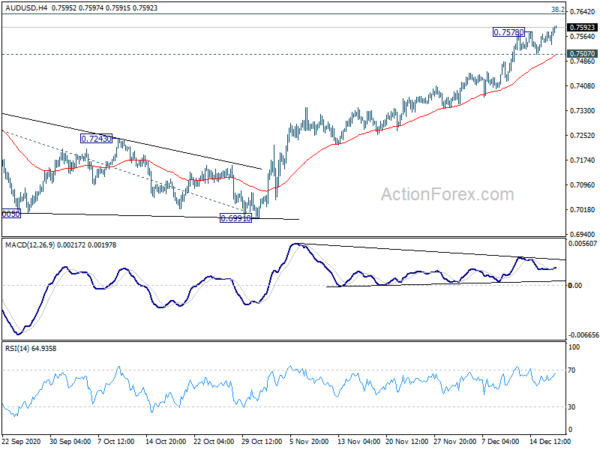 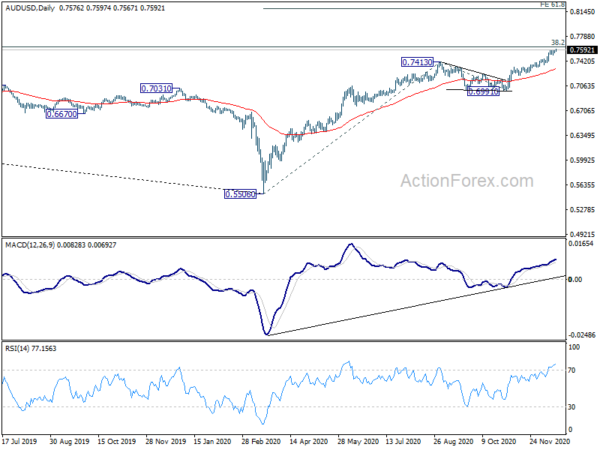 Retail traders, not hotshots like MicroStrategy, made Bitcoin in 2020 By Cointelegraph

Is Bitcoin a waste of energy? Pros and cons about Bitcoin mining By Cointelegraph