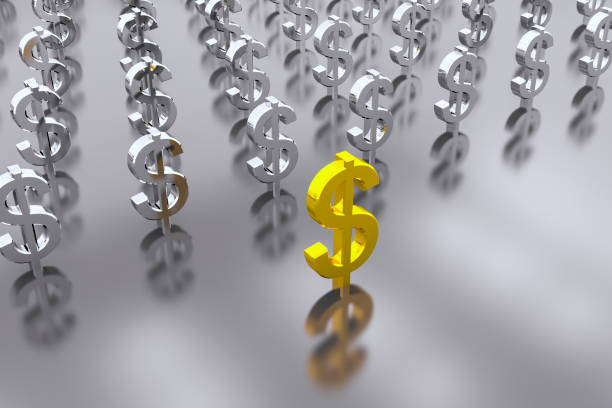 Dollar surges broadly in early US session in response to much better than expected durable goods order data. Yet, it’s actually still held well below near term resistance level to confirm bottoming. Gold’s decline is a positive sign for the greenback and we’ll see if there is following buying. Staying in the currency markets, Euro is the weakest one for today, somewhat pressured as an ECB official said it’s not at effective lower bound on rates. Swiss France is following as the second weakest. 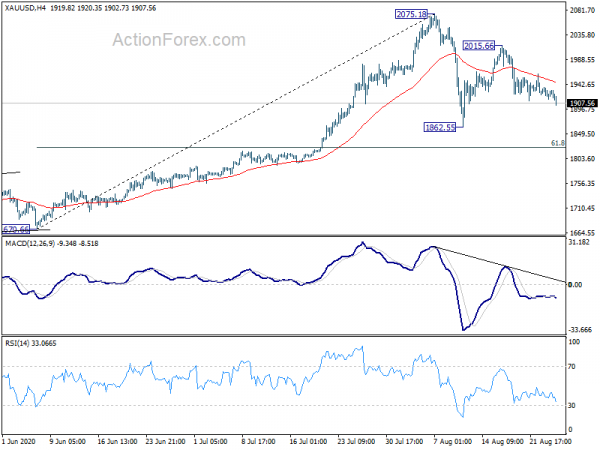 ECB Schnabel: Positive effects of negative rate dominated over the past few years

Executive Board member Isabel Schnabel said, in a speech, ECB’s negative interest rate policy has been successful in turning the “zero lower bound” into an “effective lower bound” well below zero. That “fundamentally improved monetary transmission and helped to stimulate the economy and raise inflation.

From Eurozone’s experience over the past few years, the positive effects of negative rate dominated, support by use of other policy measures. Nevertheless, she added, “side effects are likely to become more relevant over time”. She urged that “a forceful policy response by governments to the pandemic is indispensable for raising potential growth, thereby paving the way for positive interest rates in the future.”

ECB Governing Council member Peter Kazimir said economic development in the Eurozone is “inline with the baseline scenario”. The central bank has “room to wait for hard data; which are reliable”, before making the decision on another policy move.

Kazimir also said ECB is “not obliged to use the whole envelope” of the EUR 1.3T Pandemic Emergency Purchase Programme (PEPP). For now, PEPP is “working” and it’s a very “appropriate response” to the crisis.

German Scholz: The goal now is to stabilize the economy

German Finance Minister Olaf Scholz said the additional coronavirus relief measures agreed by the ruling coalition could be worth up to EUR 10B. He emphasized, “the goal now is to stabilize the economy”.

“The fact that we acted fast and big has resulted in Germany weathering the crisis much better than other,.” Scholz added. He maintained that the economy would reach pre-crisis levels at the end of 2021, early 2022.

Former BoJ policy maker Takahide Kiuchi said the central bank is unlikely to ease further due to risks of banking-sector problems. He said, “Japan will likely see more small and midsized firms go under as the pandemic’s pain deepens, which could boost credit costs for lenders through next year… The pandemic has forced the BOJ to be more mindful of the risk of banking-sector problems, which means it can’t cut interest rates easily,”

Kiuchi expected GDP to take around give years to return to pre-pandemic levels. Also, core consumer inflation will hove in “slightly negative territory for about three years”. Nevertheless, “the BOJ has already detached its policy from its 2% inflation target, which means it won’t take action to prop up prices.”

New Zealand’s goods exports dropped -0.2% yoy or NZD 9.8m to NZD 4.9B in July. Goods imports dropped -18% yoy or NZD 1.0B to NZD 4.6B. Trade surplus came in at NZD 282m, down from June’s NZD 475m, slightly below expectation of NZD 285m. Imports from all major trading partners expect China were down. On the other hand, exports to China and Japan decreased, while exports to USA, EU and Australia rose.

EUR/USD drops notably in early US session after rejection by 4 hour 55 EMA. But it’s staying above 1.1711 support. Intraday bias remains neutral first. As long as 1.1711 support holds, further rise is mildly in favor. On the upside, break of 1.1965 will extend the whole rise from 1.0635. However, considering bearish divergence condition in 4 hour MACD, break of 1.1711 should confirm short term topping. Intraday bias will be turned back to the downside for 55 day EMA (now at 1.1571). 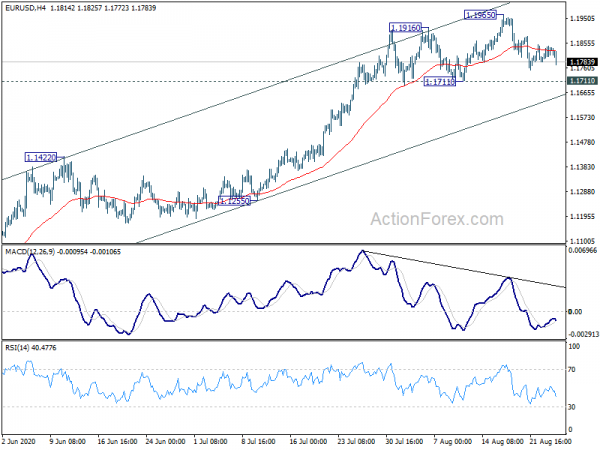 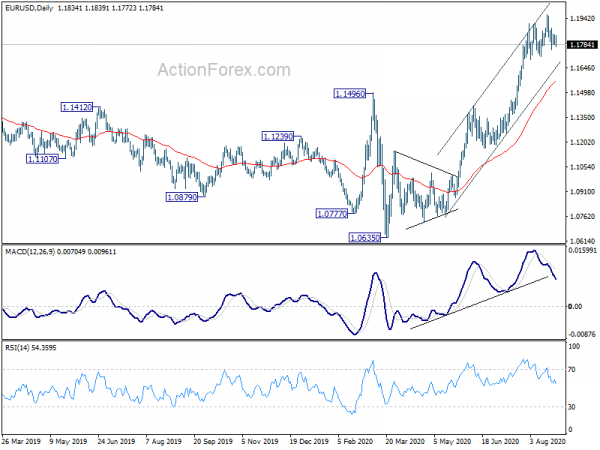