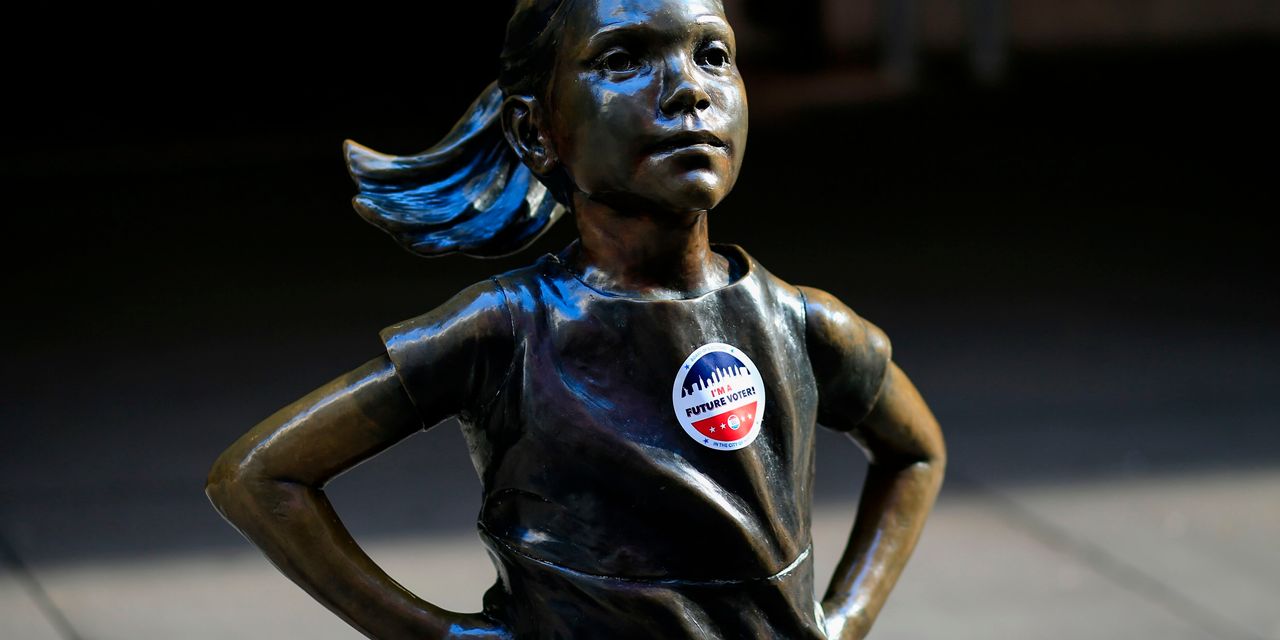 U.S. stocks soared Wednesday, touching session highs around midday, even as the presidential race between President Donald Trump and former Vice President Joe Biden looked too close to call in a number of states.

With the votes still being counted, the Federal Reserve began its two-day policy meeting with a statement expected Thursday, while economic data showed a smaller rise in U.S. private sector employment in October than the previous month.

A few key states now will determine a 2020 U.S. presidential race that has turned out to be far closer than pollsters and market participants had expected, with a number of states still counting votes Wednesday.

Vote counting in Pennsylvania, Michigan and Wisconsin was expected to stretch into late Wednesday, with both candidates having a path to secure the necessary 270 electoral college votes.

See: Biden leads Trump as control of presidency and U.S. Senate are still in doubt

It’s unclear whether a contested election could have long-term bearish implications for equities. Markets dropped during the legal contest over the vote between former Vice President Al Gore and George W. Bush in 2000, but some uncertainty may have been priced into stocks this year.

“I think the market’s reaction is rational, in the sense of how it’s reacting by sectors,” said David Bianco, chief investment strategist at DWS, pointing to rising shares in the technology and health-care sectors, leading all three major stock benchmarks higher on Wednesday, which he views as safe bets given the pandemic.

“The big question overall is, does the market belong here, given that the election hasn’t been finalized?” he said. “At this moment, cash is not trash. Cash is a fine place to be.”

The election results thus far also have diminished the likelihood of a so-called Blue Wave, where a Democrat takes the White House and the party takes control of both chambers of Congress. Market watchers had viewed that outcome as key to another round of fiscal aid for workers and American businesses.

But for all the angst over the possibility of a dragged-out contest, markets may wind up being comfortable with the outcome, said Sam Stovall, chief investment strategist at CFRA. “Familiarity is what Wall Street likes. Wall Street likes to be able to understand what’s going on. It’s uncertainty Wall Street doesn’t like.”

Legal challenges and extended uncertainty may even be priced in to the market, Stovall thinks, and the surge higher in the tech-heavy Nasdaq may point to investor relief that a solidly Democratic government won’t likely be able to regulate big technology giants like Amazon.com Inc.
AMZN,

Investors bid up tech shares Wednesday as Wall Street reverted to the investments that had helped to lead the market out of the depths of the coronavirus pandemic, with new cases rising in some Midwest states in particular.

Americans went to the polls Tuesday under the shadow of a resurgence in the coronavirus pandemic, with an alarming increase in cases nationwide and the number of people hospitalized with COVID-19 reaching record highs in a growing number of states.

Still, investors need to stay focused on the coronavirus pandemic as much as the election outcome, CFRA’s Stovall said in an interview. “This new wave is worse than what we saw in March. The real question is what kind of impact will it have on the economy and corporate profits and expectations.”

Read: Market volatility: Here’s what a contested election would mean for stocks, bonds and the dollar

Researchers at Wolfe Research, led by chief investment strategist Chris Senyek, said that the market may be trying to price in the possibility of a Biden win but a Republican Congress and a weakened prospect for more substantial relief to combat the coronavirus pandemic.

“A Biden/GOP Senate scenario appears to be getting priced in this morning,“ wrote Wolfe Research. “Our sense is that this reflects expectations for a disappointing fiscal stimulus bill (GOP Senators want $500 billion-$1 trillion), while the Fed ramps up [quantitative easing] as an offset,“ they wrote.

Meanwhile, the Fed is set to deliver a policy update at 2 p.m. Eastern on Thursday, a day later than usual due to the election.

U.S. economic data reported Wednesday was mixed. A monthly report on private employment from Automatic Data Processing, a precursor to the closely watched Labor Department report on Friday, was much weaker than expected, showing 365,000 jobs were created in October, versus expectations for a gain of 600,000.

But two readings on the services sector were mixed: one from IHS Markit showed the fastest pace of growth since 2015 while a more closely followed report from the Institute of Supply Management, the ISM services index, was at its slowest since May.

tumbled about 10 basis points to 0.78%, as investors rethought the “reflation trade.” Yields and debt prices move in opposite directions.

The ICE U.S. Dollar Index
DXY,
,
a gauge of the currency against a basket of six major rivals, was down 0.1%.

MarketWatch has launched ETF Wrap, a weekly newsletter that brings you everything you need to know about the exchange-traded sector: new fund debuts, how to use ETFs to express an investing idea, regulations and industry changes, inflows and performance, and more. Sign up at this link to receive it right in your inbox every Thursday.