Elon Musk has criticized the two leading blockchains for their transaction rates and fees. He also said that he thought there was “merit” to using as a base layer blockchain.

Elon Musk has weighed in on crypto once again. This time, he’s taken aim at and .

In a Twitter (NYSE:) post earlier this morning, the Tesla (NASDAQ:) and SpaceX founder shared his thoughts on the two leading cryptocurrencies, making specific reference to scalability. 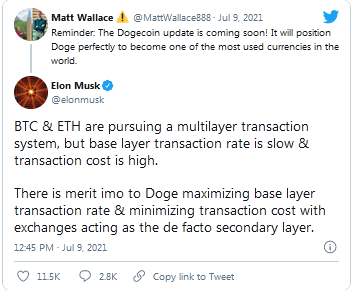 He added that he thought there was “merit” to using Dogecoin as a method of “maximizing base layer transaction rate & minimizing transaction cost,” with cryptocurrency exchanges taking on the role of a “de facto secondary layer.”

Numerous crypto enthusiasts responded to Musk to criticize his takes. Some raised questions over how exchanges would act as a Layer 2 for Dogecoin, while others urged Musk to research scalability solutions for Bitcoin and Ethereum. “Pack it up everyone – Elon solved blockchain scalability,” Anthony Sassano, a prominent Ethereum supporter, joked. “I can’t believe people listen to this,” Joel Heyman, a longtime Bitcoin supporter, added.

While using the Bitcoin blockchain can be relatively slow and expensive, the Lightning Network has brought big improvements to transaction times and costs. Similarly, several Layer 2 solutions are currently in development to help Ethereum scale. Many of Ethereum’s leading DeFi protocols have outlined their plans to launch on Arbitrum and Optimism, two highly anticipated Optimistic Rollup solutions due to launch this year.

Both Bitcoin and Ethereum are known for their high degree of decentralization, which is what makes scalability problematic. Nonetheless, for Musk, it seems that his focus is primarily on Dogecoin. Musk has been the meme currency’s leading proponent over the last few months, whereas his views on other cryptocurrencies have been harder to ascertain. He shocked the crypto community in May by revealing that Tesla would halt Bitcoin payments due to environmental concerns and has criticized the leading blockchain on several occasions since then. Despite Musk’s recent stance, Tesla still holds Bitcoin on its balance sheet after investing $1.5 billion earlier this year. In February, Musk was filmed saying that crypto was likely “the future currency of earth.”