ETF Wrap: Have a heart, and Bezos in an ETF 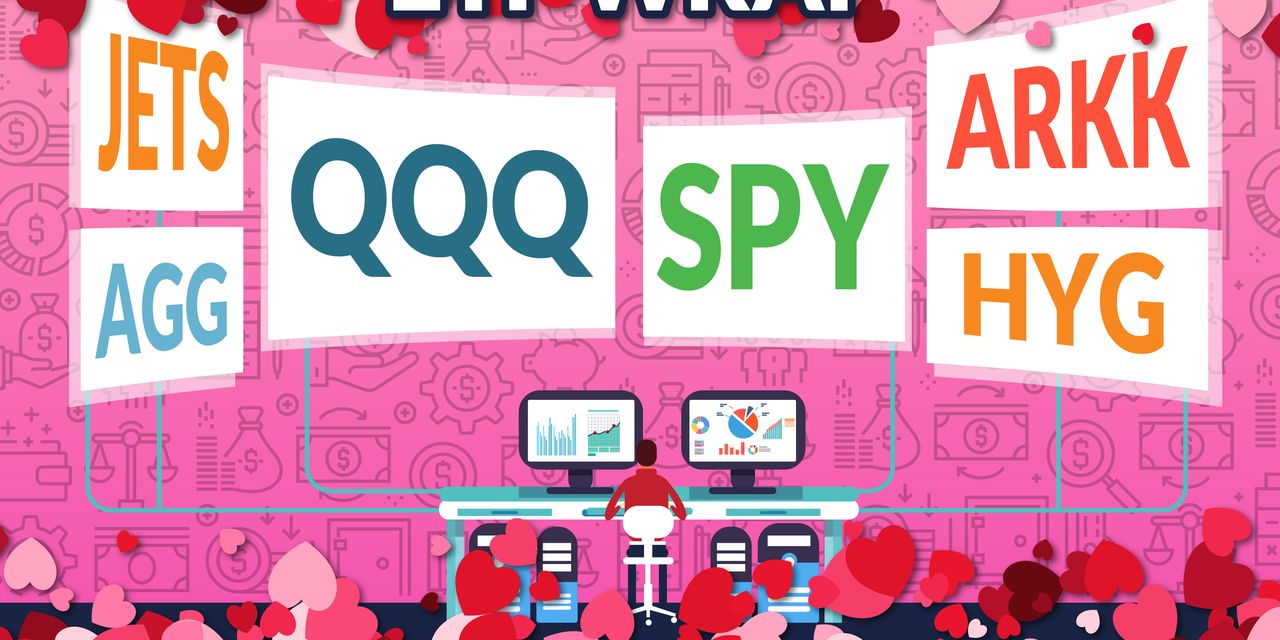 Welcome to the first ETF Wrap in months that doesn’t have existential dread as its guiding principle.

There was plenty of news, of course — Jeff Bezos stepped down to spend more time with his money, New Yorkers got hit with snow and demanded everyone else hear about every single flake, and Italy is going to do “whatever it takes” by summoning “Super Mario” to lead it out of political and economic crisis.

But that was all refreshingly normal — 2019ish, you might say.

That allows us a little space to reflect back on the market moves of the week. Redditors were in charge, once again, with silver funds
SLV,

among the biggest gainers and GameStop
GME,

plays among the biggest losers. But there were some intriguing inflows into international funds as well (see below.)

Energy ETFs rallied along with the oil price, bank ETFs jumped as the yield curve steepened, and all in all things look perfectly vanilla, even if some investors still need to be convinced the reflation is for real this time.

Thanks for reading, as always.

Do founders do it better? Maybe, as this ETF suggests

Jeff Bezos’ announcement that he plans to step aside as Amazon.com Inc. CEO made for an interesting thought experiment. Which big companies still have their founders at the helm — and how do they perform compared to companies whose founders have stepped aside?

One unique ETF has some answers.

is a collection of about 100 stocks that are just what the name says. Even for seasoned stock-watchers, the history behind the holdings can be a bit of a trip down memory lane.

That makes for a portfolio that’s surprisingly diverse, with about 32% of its holdings in technology, and sizable slugs in just about every other sector, from financials to discretionary to health care to real estate.

It’s also made up of a surprising number of winners. “These are many of the superstars of 2020,” said Todd Rosenbluth, CFRA’s head of ETF and mutual fund research, of the fund’s top ten holdings, which includes cloud-computing darling ZScaler Inc.
ZS,
,
streaming-media pioneer Roku
ROKU,
,
and touchless-payment provider Square Inc.
SQ,
.

Many of the companies lower on the list of holdings are equally impressive over longer periods of time, such as NVIDIA Corp.
NVDA,
,
which has returned 1,874% over the past five years, and Ubiquiti Inc
UI,
,
which is up 998%.

“It seems there may be a connection between founder-led companies and innovation,” Rosenbluth told MarketWatch.

That’s all made for a great run for the ETF, which gained 50% in 2020. The one drawback? It’s attracted only $10 million so far, raising questions about how long it might be around.

Global X “has had more success with more targeted products,” Rosenbluth said. “The investor audience has not found this ETF despite its record.”

Is there an ETF for that?

Investors who want to do well by doing good have lots of options, ranging from environmental strategies to funds that address social justice issues.

Now there’s an ETF that wants to take those principles to a novel area: health care.

launched in January as the first “Dual Impact” ESG ETF from IndexIQ. It offers exposure to companies involved in the treatment of cardiovascular disease, like Abbot Laboratories
ABT,

and those supporting healthy, active lifestyles, such as Nike Inc.
NKE,

“We decided to create the strategy in alignment with the American Heart Association to try to address the social issues around heart diseases, particularly among the underserved communities that have been vulnerable to it,” said Sal Bruno, IndexIQ’s CIO.

Bruno thinks the way the fund straddles consumer-discretionary names and those in the health-care sector will make it appealing to many investors. But it may have special resonance now, Bruno said in an interview.

“It’s timely now because February is American Heart Month,” Bruno said. “And thanks to COVID, people may be realizing how fragile life is.”

Visual of the week

Read next: The ETF space race heats up with one giant leap from a star manager

MarketWatch has launched ETF Wrap, a weekly newsletter that brings you everything you need to know about the exchange-traded sector: new fund debuts, how to use ETFs to express an investing idea, regulations and industry changes, inflows and performance, and more. Sign up at this link to receive it right in your inbox every Thursday.

Mortgage rates soar above 3% — how high can they go before they scare off homebuyers?

Exactly How Day Trading Works According to Specialists