appears to have resumed its uptrend after a week-long consolidation period.

Ethereum is back in the green after shaking out weak hands. Continued buying pressure could push ETH towards a new all-time high.

Shakeout Before The Breakout

After of a symmetrical triangle on Mar. 31, Ethereum surged by nearly 16% to a of $2,160. The upswing was met with a significant spike in profit-taking that resulted in a 10.70% pullback.

Many overleveraged traders were caught by surprise as nearly $230 million worth of long ETH positions were liquidated across the board.

The massive losses caused panic among market participants as the sentiment towards Ether dropped to its lowest levels recorded since the beginning of the year.

Savvy traders have since implemented this counter-sentiment trading strategy. Santiment recorded a substantial decrease in the number of Ether tokens held on exchanges throughout the most recent correction.

The behavior analytics platform suggested that such market behavior would likely diminish Ethereum’s downside potential and lead to another upswing.

“The amount of Ethereum sitting on exchanges continues to drop lower, as more and more funds move into hard wallets and DeFi-based options. This is a good sign for ETH holders, as less exchange supply implies a decreased likelihood of major sell-offs,” said Santiment. 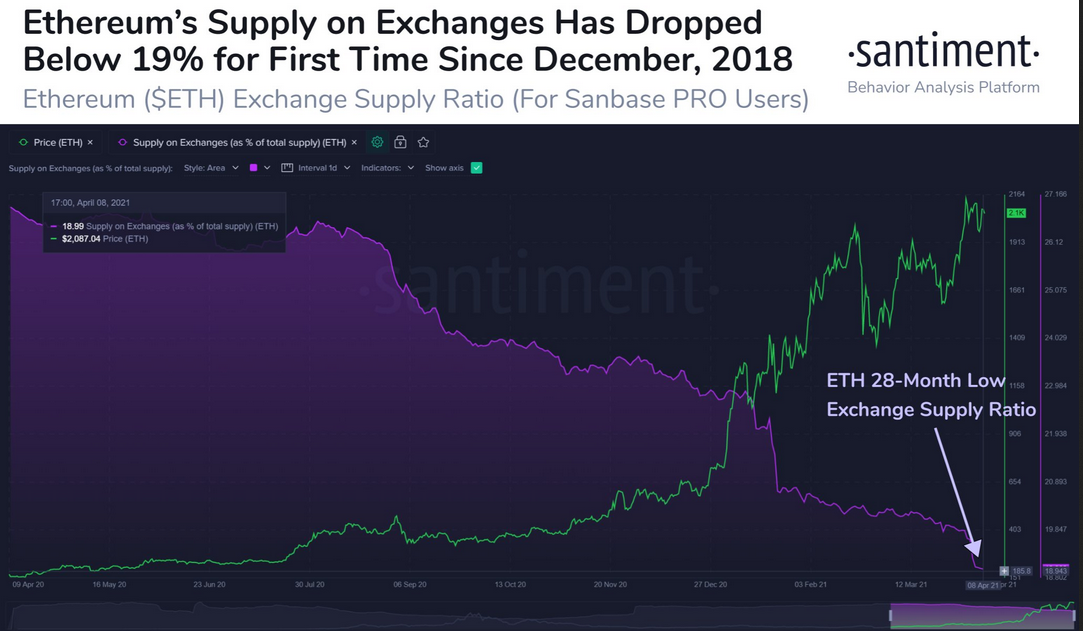 Interestingly, Ethereum kicked off Saturday, Apr. 10, on the right foot, getting back on track to reach its upside potential. The smart contracts giant shot up by 7% since the daily open, making a new all-time high of $2,212.

Based on the height of the symmetrical triangle’s y-axis, Ether has more room to go up. This technical formation that ETH could rise another 15% toward the 141.1% or 161.8% Fibonacci retracement level. It is worth noting that as long as Ethereum holds above the $2,050 support level, the odds will continue to favor the bulls. Failing to do so could trigger another downswing to the 78.6% Fibonacci retracement level at $1,860 before the uptrend resumes.