Ethereum’s inability to catch up with Bitcoin’s price action has generated skepticism, creating the perfect conditions for a bullish impulse from a counter sentiment perspective.

Following a 27% correction that saw its market value plunge to $900 on Jan. 11, Ethereum entered a stagnation period. Its price has made a series of higher lows since then, but the $1,270 resistance level continues to reject ETH from advancing further.

A spike in the buying pressure behind Ethereum may be strong enough to break above the overhead resistance. If this were to happen, ETH’s price could shoot up nearly 29% to make a new all-time high of $1,650.

This target is determined by measuring the distance between the triangle’s two highest points and adding it to the x-axis. 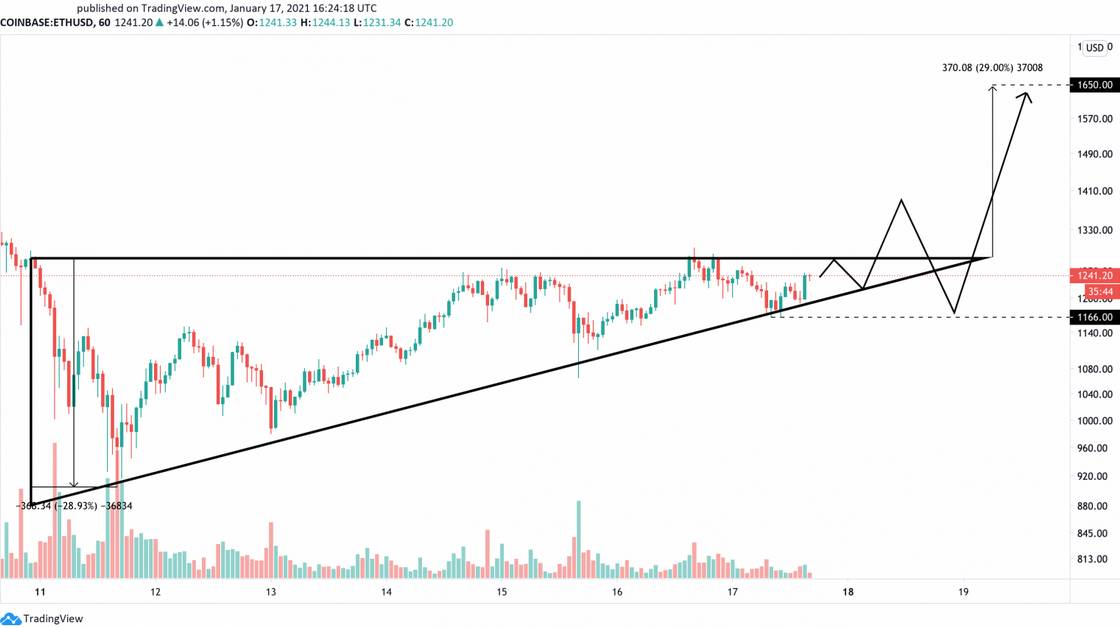 Given the high volatility in the cryptocurrency market, it is likely that Ethereum will dive first to flush out overleveraged traders before it finally breaks out.

A spike in downward pressure by market makers could push Ether towards the $1,160 support level before it marches to new all-time highs.

IntoTheBlock’s “In/Out of the Money Around Price” (IOMAP) model suggests that based on transaction history, this price hurdle will be able to contain falling prices. Nearly 500,000 addresses had previously purchased over 8.60 million ETH at an average price of $1,160, making it a significant area of interest.

It is worth noting that by slicing through the underlying demand barrier at $1,160, the odds will increase drastically for a steeper decline.

If this were to happen, the IOMAP cohorts show that $1,000 becomes the next crucial focal point for Ethereum. Here, roughly 660,000 addresses bought more than 3.60 million ETH.