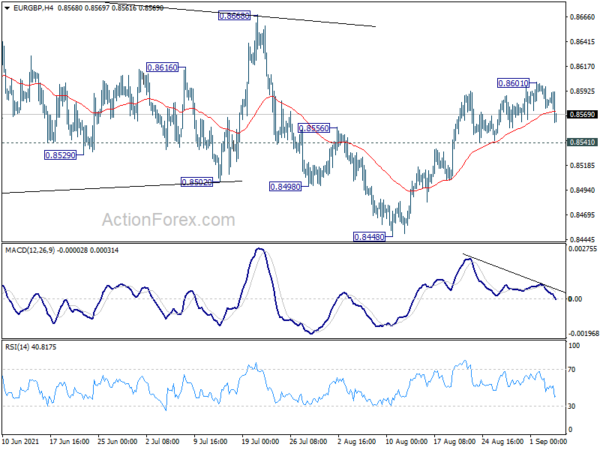 EUR/GBP edged higher to 0.8601 last week but quickly lost momentum again. Initial bias is neutral this week first. Another rise is in favor as long as 0.8541 support holds. On the upside, above 0.8601 will resume the rebound from 0.8558 to 0.8668 resistance. Firm break there will be a strong sign of near term bullish reversal at least. On the downside, however, break of 0.8541 support will turn bias back to the downside for retesting 0.8448 low instead.

In the bigger picture, price actions from 0.9499 (2020 high) are still seen as developing into a corrective pattern. Deeper fall could be seen as long as 0.8668 resistance holds, towards long term support at 0.8276. However, firm break of 0.8668 resistance would argue that a medium term bottom was already formed. Stronger rise would be seen to 0.8861 support turned resistance to confirm completion of the corrective pattern.