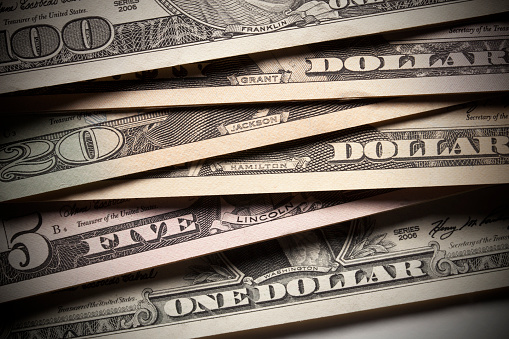 Commodity currencies are taking control into US session with help from rebound in European indices. DOW future is also currently up around 450 pts. Canadian Dollar came out of the shadow of steep decline in oil prices, leading Aussie and Kiwi. At the time of writing, Sterling is the weaker one, but there was no follow through selling after initial selloff. Yen and Swiss Franc are the next weakest while Dollar and Euro are mixed. Overall, forex traders are refusing to commit to a move before US elections.

Technically, a strong rebound might be seen in US stocks, DOW would need to overcome 55 day EMA (now at 2765.11) decisively before confirming bottoming. The level is rather far away and we’re not expecting it to be tested today. USD/JPY could be a focus though, as it started to feel heavy just ahead of 105.05 near term resistance. Rejection from there would retain near term bearishness for at least another take on 104.02 support.

UK PMI Manufacturing was finalized at 53.7 in October, down from September’s 54.1. It’s nonetheless the fifth straight months of expansion reading. Markit said output and new order growth slowed while job losses mounted. But business optimism was at highest level since January 2018.

Rob Dobson, Director at IHS Markit: “October saw the UK manufacturing recovery continue, albeit with the upturn losing momentum amid ongoing lockdown measures and signs that growth could weaken further in coming months after Brexit-related stockpiling. The main drag was a fall back into contraction for the consumer goods industry… There was positive news on the export front… However, a significant contribution to the improvement in exports came from a temporary boost of Brexit stock building by EU clients.

“The outlook for the remainder of the year has therefore become increasingly uncertain, with risks tilted to the downside. While most companies maintain a positive outlook, with three-fifths of manufacturers expecting output to rise over the coming year, concerns about near-term risks posed by the pandemic, changes to COVID restrictions and related stimulus measures, plus Brexit anxieties, continue to fog the future.”

Chris Williamson, Chief Business Economist at IHS Markit said: “Eurozone manufacturing boomed in October, with output and order books growing at rates rarely exceeded over the past two decades. However, while the data bode well for production during the fourth quarter, the expansion is worryingly uneven…. The renewed weakness of consumer-facing businesses serves as a reminder that, while manufacturing as a whole may be booming for now, the sustainability of the recovery will depend on household behaviour returning to normal and labour markets strengthening. Given second waves of virus infections, this still looks some way off.”

Ai Group Chief Executive Innes Willox said: “With the quantity of fiscal support easing in October and with the tax cuts only just starting to flow through, the lift in sales and the strong growth of new orders are particularly encouraging signs of improving household and business confidence. The solid national performance was achieved despite another month of contraction in Victoria. With restrictions in Victoria being lifted there are very good prospects of further strength in the closing months of 2020”.

Japan PMI manufacturing finalized at 48.7, particularly buoyed by the return to growth in export orders

Japan PMI Manufacturing was finalized at 48.7 in October, up from September’s 47.7. Output and new orders both fell at softer rates. Export orders also increased for the first time since November 2018. Business optimism reached highest since July 2017.

Usamah Bhatti, Economist at IHS Markit, said: “Japanese manufacturers will be particularly buoyed by the return to growth in export orders, as demand across key overseas markets such as China picked up… The sector reported a weakening employment trend in October, however, as staff numbers fell at a faster pace compared to September… An encouraging finding in October was the sustained improvement in business optimism. Approximately 38% of Japanese manufacturers surveyed foresee an increase in output over the coming 12 months, strengthening the index to its highest reading in over three years.”

China Caixin PMI Manufacturing rose to 53.6 in October, up from 53.0, beat expectation of 53.0. That’s also the highest level since August 2014. Markit noted that output rises sharply amid quickest increase in total new work for nearly a decade. However, pandemic dampens growth of new export orders.

Wang Zhe, Senior Economist at Caixin Insight Group said:. “To sum up, recovery was the word in the current macro economy, with the domestic epidemic under control. Manufacturing supply and demand improved at the same time. Enterprises were very willing to increase inventories. Prices tended to be stable. Business operations improved, and entrepreneurs were confident.

“But the twists and turns of overseas infections remained a headwind for exports. The full recovery of employment depends on stronger and more-lasting business confidence. As the economic indicators for consumption, investment and industrial output for September were generally better than expected, it is highly likely that the economic recovery will continue for the next several months. But there are still many uncertainties outside of China, so policymakers need to be cautious about normalizing post coronavirus monetary and fiscal policies.”

USd/JPY is staying in consolidation above 104.02 temporary low and intraday bias remains neutral first. With 105.85 resistance intact, further decline is expected and downside breakout is in favor. Firm break of 104.00 will resume larger decline from 111.71, towards 101.18 low. On the upside, firm break of 105.05 will indicate short term bottoming and turn bias back to the upside for 106.10 resistance. 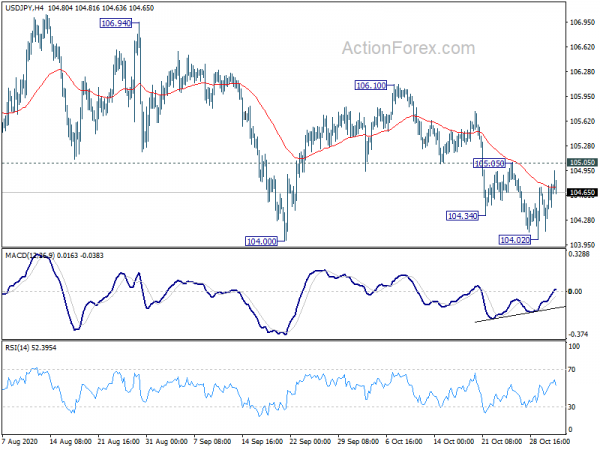 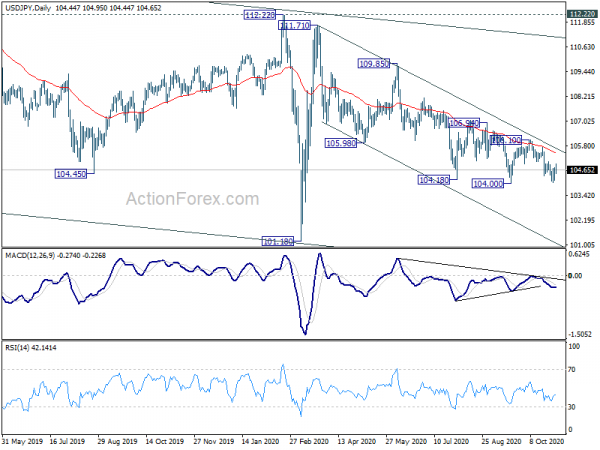