Facebook (NASDAQ:) didn't announce a purchase in its Q1 call, but other big investors have done so.

The crypto community may be disappointed at the news that Facebook does not own Bitcoin, but whales have gone into a buying spree, purchasing over 60,000 BTC in the past two weeks.

Emotions ran high in the crypto market ahead of Facebook’s Q1 2021 earnings , as rumors circulated claiming that the social media giant had added Bitcoin to its balance sheet.

Some of the most prominent industry figures took the bait, spreading the news to thousands of followers. On Apr. 27, Atlanta Digital Currency Fund CIO Alistair Milne tweeted, “Rumor: Facebook will announce they hold Bitcoin on their books when they release their quarterly results after trading closes tomorrow.”

When Facebook failed to announce a purchase, Milne argued that he did not start the rumor. He showed that he received an email from the UK-based asset management firm Lansdowne Partners, which seemingly confirmed rumors of Facebook’s Bitcoin purchase.

Ultimately, Facebook did not mention Bitcoin or any other cryptocurrency on its earnings call despite the mounting speculation.

It went on to report a 48% increase in revenue compared to last year. Facebook attributed the spike in revenue to an increase in its ad rates and the number of ads on the site.

Even though Facebook has not shown any interest in Bitcoin yet, other high net worth individuals have gone on a buying spree.

According to the behavior analytics platform Santiment, whales holding 10,000 BTC or more have added over 60,000 coins to their portfolios since the peak of nearly $65,000 on Apr. 14.

“Bitcoin whale addresses (holding 10k+ $BTC) continue to get richer and accumulate as prices range, particularly after the all-time high two weeks ago,” Santiment wrote. “Around 90k BTC ($4.92B) has been added in total to these addresses since Apr. 5.” 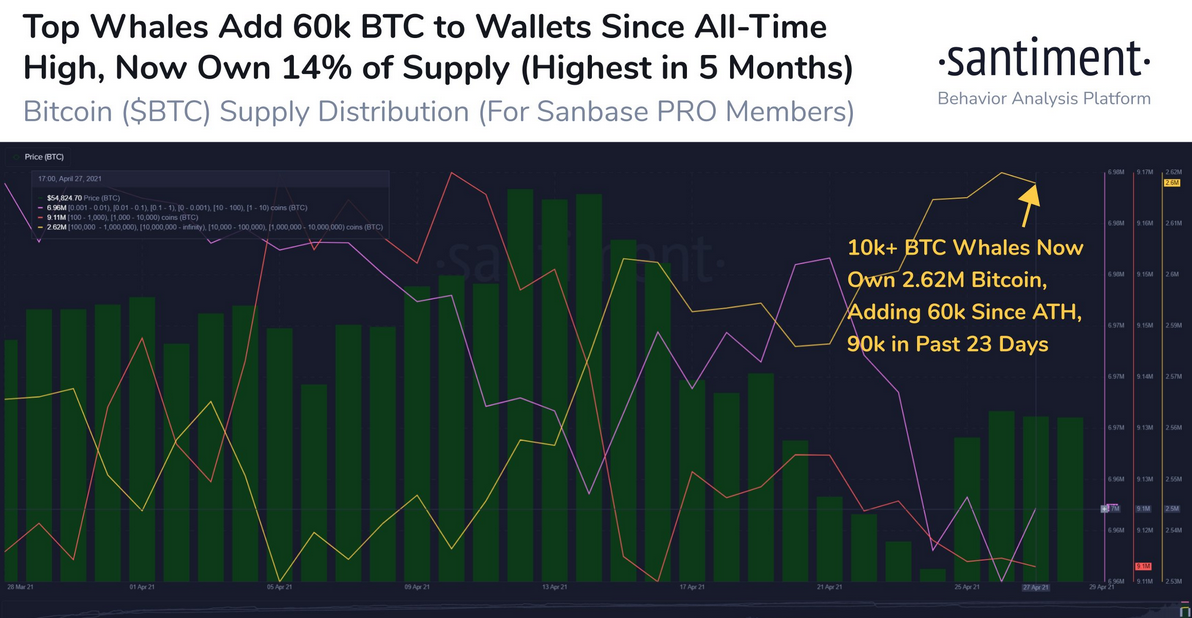 While buying pressure rises, IntoTheBlock’s In/Out of the Money Around Price (IOMAP) model shows that Bitcoin sits underneath a massive supply wall. Roughly 1.80 million addresses previously purchased more than 880,000 BTC between $54,400 and $55,960. As such, further price appreciation may prove challenging.

Only a daily candlestick close above this barrier could see Bitcoin resume its uptrend and march toward higher highs. But rejection from the $54,400-$55,960 resistance would likely lead to a downswing to $50,000 given the lack of support in between.