The stablecoin is trading at $0.97, at time of writing, after previously falling to $0.70.

Fei is an algorithmic stable coin. Unlike centrally managed stable coins such as Tether, it achieves price stability by automatically adjusting its supply based on price and collateral amounts.

Initially, users committed over $1 billion in and minted the token via FEI-ETH pool. The team hoped to peg the coin to the price of the through direct incentives and reweights.

However, Fei failed to achieve price stability after its Apr. 3 launch. Now, as a means of mitigating the project’s rocky start, the project has implemented the FIP-2 redemption proposal, allowing the stable coin to be redeemed at $0.95 in ETH.

According to the project team, many users wanted to participate quickly for the governance token airdrop and immediately exit. This created significant selling pressure and affected prices.

Soon after, a critical vulnerability was found in the direct incentive system, which forced the team to remove the function. Following this, the protocol’s price stabilizing mechanism (Peg Reweights) could not operate and had to be paused as well.

Those issues caused prices to crash further. But thanks to the new proposal, the community has voted to establish a minimum price for exchanging FEI and ETH within the protocol.

“In order for the system to get close to the $1 peg, the team proposed that we would artificially set the floor at 95 cents. This would allow us to release the selling pressure as we move towards reinstating the direct incentive system.” 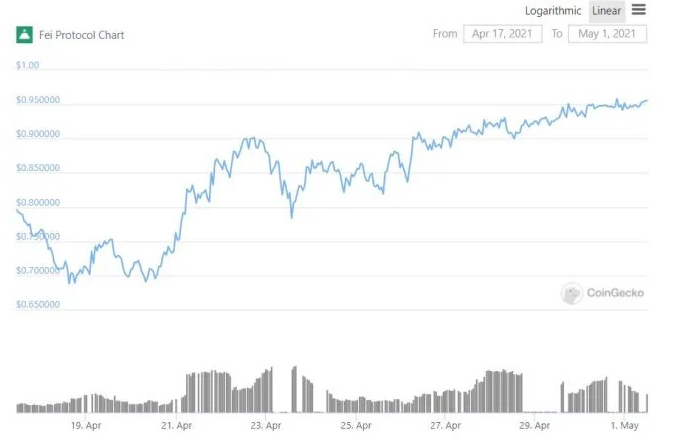 More Improvements On The Way

Fei Protocol has also allocated 300,000 ETH to users from its treasury, which can be redeemed on the project’s website. The governance community has also voted to double FEI staking rewards to further incentivize adoption of the stable coin.

The team is additionally conducting a full code audit so that it can reinstate price stabilization mechanisms that were previously halted.