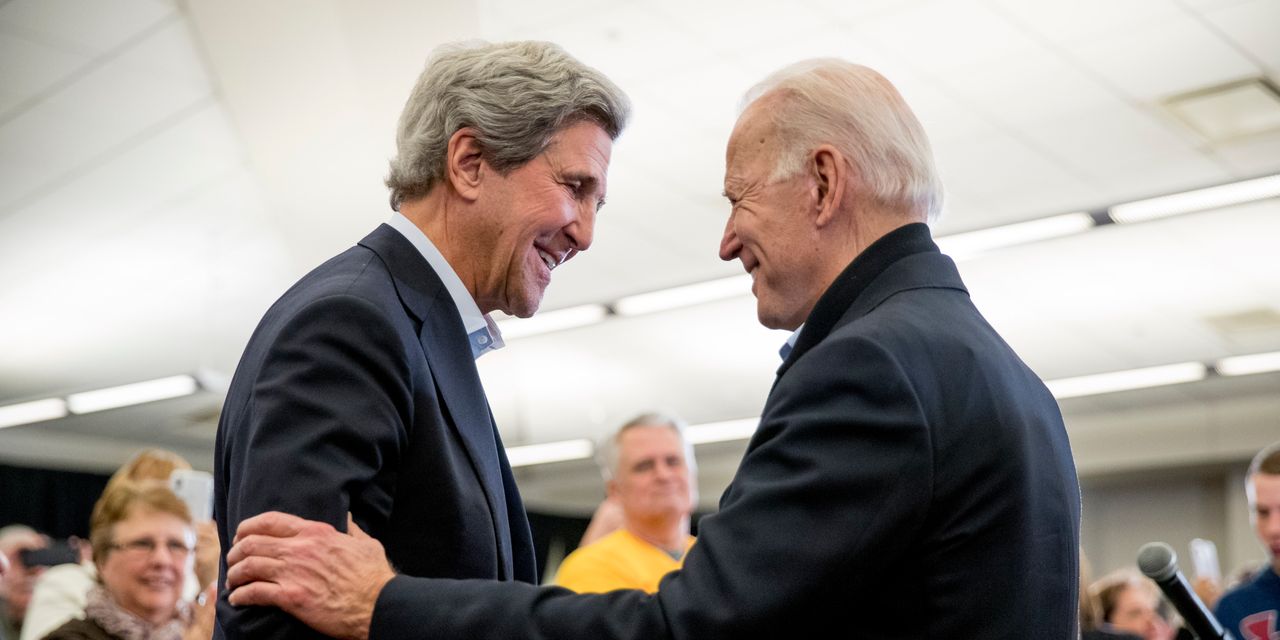 Environmental advocates, including those working to make sure that stock portfolios
DJIA,

reflect the risk of a warming planet, generally welcome the attention given climate change in the incoming Biden administration, which has named John Kerry to a full-time post as climate envoy.

Republican advisers, though cautious, embrace some signals from Biden that the private sector and technological innovation will play a part in getting the U.S. to net-zero emissions. They want to make sure any link between trade, security and climate change keeps up pressure on China.

Biden ran on a proposed $2 trillion initiative promoting a clean-energy transition and creating green jobs. He seeks to decarbonize the power sector by 2035 and reach net-zero emissions across the entire economy by 2050. Cutting fossil-fuel subsidies and boosting the switchover to electric vehicles
TSLA,

are part of the plan.

All told, most observers are calling Kerry, a former secretary of state and one-time presidential nominee with an established global profile, a “moderate” choice for what is expected to be a defining issue for health and prosperity in the coming decade.

For some, that means the soon to be 77-year-old Kerry will be too soft on this pressing issue. Others say his statesmanship will be key considering that there’s no party dominance in Congress and because of likely fence-mending as the U.S. rejoins global climate-change efforts severed by a Trump administration that argued the U.S. shouldered unfair responsibility.

Kerry is meant to help the U.S. and its allies fight climate change as a full-time special presidential envoy and will sit on the National Security Council. This marks the first time that the NSC will include an official dedicated to climate change. It is also reflective of expectations that Biden will push for all departments and agencies, not just Energy or the Interior, to include climate change in policy decision-making.

Related: From climate change to free-trading apps, brace for an aggressive SEC under Biden, experts say

Kerry has been focused on climate change during the Trump years, working alongside Republicans including John Kasich and Arnold Schwarzenegger, among others. Late last year, Kerry formed World War Zero, describing it as “a new bipartisan coalition of world leaders, military brass and Hollywood celebrities to push for public action to combat climate change.” Its goal is “to hold more than 10 million ‘climate conversations’ in the coming year with Americans across the political spectrum,” he said at launch.

Here’s a collection of Washington and private-sector reactions to the Kerry nod.

“Those interested in a sensible climate policy should welcome a figure with political experience and substantive expertise. However, the details have yet to emerge regarding the contours of the new post.  It will be interesting to see how the envoy will interact with other components of the U.S. government that possess statutory portfolios related to climate change.”

“Ceres welcomes the creation of the climate czar as a part of the incoming Biden administration and looks forward to working with former Secretary of State John Kerry in this new, critically important role. The climate crisis impacts all facets of our lives and livelihoods — from the economy to our national security and the safety of our communities.”

“The effectiveness of foreign policy is dictated just as much by perceptions as it is of reality, and the truth is many of our foreign partners that we trade with and have forged security relationships with perceive climate change as an important issue in their engagement with the United States. Taking the issue seriously by having an envoy can give America some credibility in future negotiations, but the Biden administration will have to be cautious not to repeat the mistakes of the Paris Agreement and Kyoto Protocols which implicitly endorsed China’s skyrocketing emissions.”

— Philip Rossetti, senior fellow, energy, with free-market think tank R Street. Rossetti’s views are his own. He recently co-wrote a commentary about climate change policy in a divided government.

“Biden has read the room and understands that the American people not only comprehend the existential threat from climate change, but are desperate for action. It’s not really a Republican or Democratic idea; future generations will look back and say, what took you so long?”

— Richard Steel, author of “Elevated Economics: How Conscious Consumers Will Fuel the Future of Business.” Steel spoke to MarketWatch before the Kerry announcement was made official and mulled the benefits of a cabinet-level climate leader versus a blue-ribbon commission that might bring the departments in sync.

“Having held cautious optimism that President-elect Joe Biden could be persuaded to take a bold, determined approach to tacking the climate crisis from day one, we are suddenly alarmed by his choice of John Kerry for climate czar. Kerry has been a long-time apologist for fossil-fuel fracking, and a reliable promoter of false climate solutions like market-based carbon-trading schemes. Kerry’s proposals are tired ideas from years past that will do little or nothing to address our climate crisis and will actually continue to place a disproportionate, unjust burden on vulnerable communities that have borne the brunt of fossil fuel pollution and climate impacts for decades now.”

— Statement from 350.org, a nonprofit that has emphasized holding polluters accountable and leaving fossil fuels out of an energy mix.