Going Down The Bitcoin Rabbit Hole

“There was euphoria in stocks and cryptos late in 2017, but now we are seeing much more retail participation. There was a lot of optimism even 6 months ago, but now the worst stocks (penny stocks) are leading the way instead of FAAMNG. This is a sign we are in the final stages of the bubble. Investors in money losing hype stocks and cryptocurrencies will have nothing to hold onto when the momentum shifts.” – Alex Pitti, “The Warning Sign That Correctly Called The Last Bitcoin Crash Is Back,” 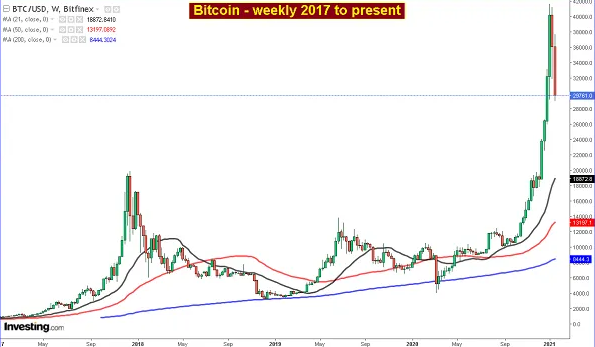 In going down the rabbit-hole and digging even deeper into the inner-workings of the Bitcoin market, I discovered that some of the offshore Bitcoin trading platforms have enabled Bitcoin buyers/traders to employ up 100x leverage. The offshore platforms do not accept dollars. There’s an intermediate cryptocurrency which is considered a “stablecoin” called Tether issued by Tether Ltd. U.S. Bitcoin buyers using the offshore platforms to trade Bitcoin have to exchange for Tethers or other stablecoins. Supposedly a Tether is fixed at $1. Tethers are then used to purchase Bitcoins on margin.

Tether Ltd represents that it holds the dollars (or and ) issued for Tethers in an offshore bank in the Bahamas (Deltec Bank). Thus, on paper anyway, the Tether is backed 1:1 by dollars. However, I came across an article in which the author, who happened to have made a small fortune recently in Bitcoin, did some clever investigative work and discovered that from January 2020 to September 2020 the amount of all foreign currencies held by all domestic banks in the Bahamas (so, not just Deltec Bank used by Tether) had increased by $600 million while the total amount of Tethers over the same time period increased by nearly $5.4 billion.

Not only are the Tethers being used to load up on Bitcoin by retail investors not fully-backed by dollars as claimed, the offshore cryto trading platforms are allowing investors to leverage up their Bitcoin purchases. In one case, Bybit, offers up to 100x leverage.

The recent high in Bitcoin is double the high that it hit in December 2017. When Bitcoin peaked back then, the stock market peaked one month later. The reversal in both was swift and sharp. At the same time as Bitcoin was peaking in 2017, a crypto exchange called Bitfinex had been under regulatory scrutiny for highly questionable dealings and missing customer funds.

A research paper by a University of Texas finance professor and a graduate student found that price manipulation accounted for about half of the price increase leading up to the 2017 peak. At the time, Bitfinance was the exclusive purveyor of Tether (both companies had the same CEO). The authors examined the flow of Tether during periods in 2017 when Bitcoin was rising in price and discovered that about half of the time price increases could be traced to the hours immediately after Tether flowed to a handful of other crypto exchanges. The price rose much more quickly on exchanges that accepted Tether than on those that did not. The pattern no longer occurred when Bitfinance stopped issuing new Tether in 2018.

To date, Tether has been able to maneuver around allegations that its stablecoin is not fully-backed by dollars. In April 2019 the NY Attorney General opened an investigation into Tether with regard to how Tethers are issued, backed, accounted for and flow through the cryptocurrency trading networks (“ecosystem”). Up until July 2020, Tether has used legal maneuvers to defer the NY AG’s document requests. But on July 9th, the NY Supreme Court denied Tether’s final appeal, forcing Tether to comply and set a deadline of Jan. 15, 2021 for compliance.

In September, after the NY Supreme Court ruling, the issuance of Tethers by Tether Ltd began to accelerate on a daily basis. In the first two weeks of January 2021 (just ahead of the final compliance date), $2.3 billion in Tethers were issued. The theory is that Tether Ltd was looking to maximize the amount of value it could extract from the crypto ecosystem issuing Tethers ahead of the possibility that it might be shut down by the NY AG. The deadline has been delayed another 30 days. 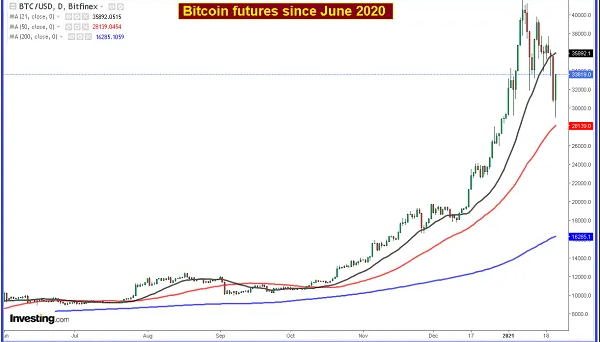 If you look closely at the daily Bitcoin chart above, Bitcoin’s price began to go parabolic in early September, in correlation with the accelerating rate of Tether issuance.

This is important background information because it would appear as if Tether not only is not 100% backed by dollars held in Deltec Bank in the Bahamas, and therefore a large percentage of Tethers have been fraudulently issued, but that the acceleration in the issuance of Tether since the end of August has been partially if not largely responsible for funding the retail speculation and price rise of Bitcoin (and other cryptos).

If this these turns out to be correct, and my “sniffer” tells me that there’s enough evidence to suggest that it is, at some point the price of Bitcoin will collapse just as suddenly as it did after the 2017 parabolic move. That collapse may have already begun.

Here’s links to the sources I used in the above analysis (hover your cursor over the link and click): The Bit Short: Inside Crypto’s Doomsday Machine; Tether; Bitfinex; NY Times; Bloomberg.

Last week, Bitcoin bounced on Friday after trading down to just below $29,000 on Thursday night.  I believe the bounce in part was “technical” after it had dropped 30% from the high-tick on Jan. 8. But also the bounce is attributable to the announcement Friday morning that MSTR had purchased another $10 million in Bitcoin. On Saturday (1/23) Bitcoin was trading down about 4.8% (Bitcoin trades 24/7).

MSTR’s CEO, Michael Saylor, believes that the Biden Administration will address “legal ambiguities” in cryptocurrencies and that will increase institutional interest in the crypto space. I guess Saylor has chosen to ignore Janet Yellen’s remarks her second day as Treasury Secretary that there needs to be increased regulatory scrutiny of and implement an effective regulatory framework for cryptocurrencies.

Meanwhile, the BIS – the Central Bank for all central banks, announced that it would begin testing a cross-border Central Bank Digital Currency testing platform. I’m fairly confident that if a Central Bank Digital Currency is established, it will usher in an era of official intolerance for private label cryptocurrencies. Furthermore, if Tether is shut-down or is forced to comply with an independent audit of its operations, it will rather quickly introduce legitimate price discovery on the value of Bitcoin.