Grayscale’s Bitcoin And Ethereum Premiums Back At Highs

The steep rise in the premiums for Grayscale’s Bitcoin and Ethereum shares reflect rising demand among high-volume investors.

Grayscale’s Rise Back To Glory 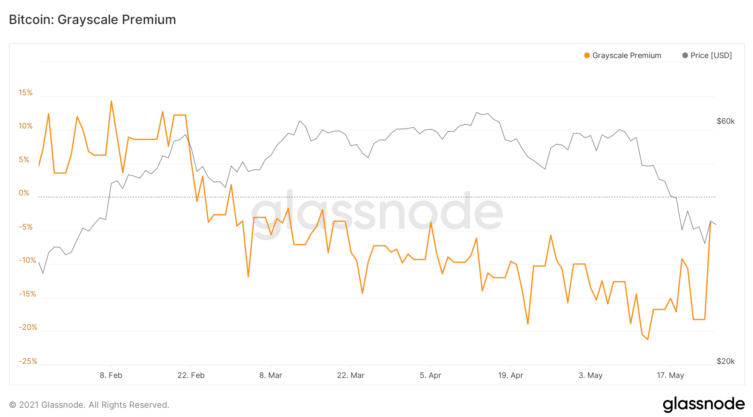 The leading catalyst for the sudden rise is the recent launch of Simplify U.S. Equity PLUS GBTC ETF, which invests 85% of a portfolio in stocks and up to 15% in Bitcoin via GBTC.

The recent dip in ’s price, along with the discount on GBTC, has likely also made the asset more appealing to high-net-worth investors. Market analyst Ben Lilly of Jarvis Labs noted to Crypto Briefing that “there’s accumulation taking place with rising balances,” suggesting returning demands among institutional investors.

“We have market mover demand growing, the discount shrinking, and lower prices,” Lilly added. Market movers are high-volume traders with active participation in the market, such as exchanges and over-the-counter desks.

Prior to this week, the premiums hit highs until mid-February, before trending down until early May. The downtrend continued even as Bitcoin’s price rallied, suggesting that more dominant players were dumping on retail investors.

Further, the unlocking of new shares towards the end of June forecasts an ongoing rise in the premiums. In the past, unlocking periods have been bullish for Bitcoin due to the unwinding of the arbitrage trade by institutional investors.

The arbitrage trade is a risk-free earning method if the premiums are positive. Institutional investors issue GBTC at the net asset value price and sell them on the market at a premium, then repeat the trade. The shares stay locked for a period of six months after issuance.

For instance, about 37,000 BTC were unlocked in May after being issued in November 2020. As the premiums stayed negative, the trust has not added to its total holdings since March.

Lilly said that he was bullish on the premiums with unlocking happening every week and a large tranche of shares—about 31,000 BTC—due for unlocking “with some big names at the tail end of June.”

Lilly concluded that “the playbook is drawn for the premium to return before the end of June” based on the surging demand and the disappearance of euphoria from the market.