How The Sports World Is Embracing Crypto

Sponsorships, NFTs, and fan tokens are all contributing to crypto adoption in sports.

Sports and crypto may seem like two unrelated worlds, but they have much to offer each other under closer inspection.

In 2014, payment provider Bitpay signed on with ESPN to sponsor a college football game, the St. Petersburg Bowl. Although minor, it marked a significant milestone as the first major crypto sports deal. This year, crypto made it to the NFL as the New York Giants became the league’s first team with a crypto sponsorship, partnering with Grayscale Investments. 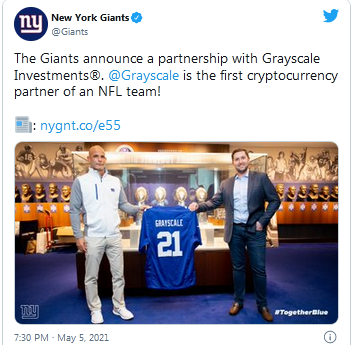 While football started the trend of crypto sponsorships in 2021, it’s tough to find a sports league without some connection to crypto. NBA team Portland Trail Blazers recently announced a partnership with crypto cashback app .

Earlier in the year, Miami HEAT signed an exclusive naming rights deal with crypto exchange , renaming its home stadium the “FTX Arena.” The 19-year deal was worth a massive $135 million. Following this, FTX signed the biggest sports sponsorship in crypto to date when it partnered with Major League Baseball in a five-year deal on June 23.

Those involved in sponsorship deals see a lot of potential in marketing crypto services to sports fans. Commenting on the deal with FTX, MLB Chief Revenue Officer Noah Garden said:

“Our fans have been early adopters in using new technologies to engage with our game.”

Crypto exchanges and payment providers have made up the bulk of sports sponsorships, highlighting substantial crossover between sports fans and cryptocurrency adoption. Sports teams are starting to allow ticket purchases with cryptocurrencies, with MLB team Oakland A’s offering a full season suite for one Bitcoin earlier this year.

Sports organizations could also see crypto sponsorships as a much-needed opportunity to attract younger fans. According to a 2017 study from the Sports Business Journal, the average MLB fan is now 57 years old.

The Rise Of NFTs In Sports

Blockchain technology is also adding value for sports fans in the form of collectible NFTs.

NFTs are non-fungible tokens, a type of asset that allows creators to tokenize digital art, collectibles, or any other kind of asset on the Internet. NFTs have enhanced collectibles, as the blockchain technology behind them allows for provable ownership and scarcity.

The NBA has been one of the most successful organizations to utilize NFTs thanks to its involvement in the digital collectible card platform NBA Top Shot. Built on the blockchain, the game allows users to buy, sell, and trade NBA “moments” and keep them stored on the blockchain in digital wallets.

The platform has seen massive success in 2021, reaching over one million users in May. The secondary market for Top Shot is also attracting big investors, with a rare LeBron James moment selling for $387,600 in April.

Over in Europe, soccer is also benefiting from the NFT craze. The Fantasy soccer game Sorare has attracted several licensing partnerships from major European teams, including Real Madrid and AC Milan. In the game, players act as managers, assembling teams of soccer player NFTs on the blockchain. Teams are then ranked based on the performance of their players on the real-world soccer pitch, just like traditional fantasy soccer.

NFTs on Sorare are also selling for eye-watering amounts, but not quite as high as NBA Top Shots. In March, a one-of-a-kind Cristiano Ronaldo NFT sold for $290,000. 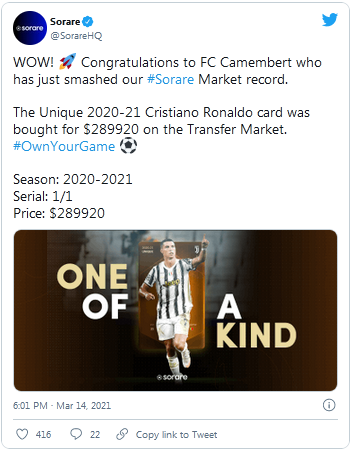 Digital collectibles are not the only way sports organizations are using NFTs. Mark Cuban, entrepreneur and owner of the NBA team Dallas Mavericks, plans to turn game tickets into NFTs. Speaking on the Delphi Podcast in March, Cuban said:

“We want to be able to find ways so that not only can our consumers, our fans, buy tickets and resell them, but we continue to make a royalty on them.”

Cuban hopes that using NFTs can accommodate fans who might want to sell high-demand games from their season tickets while at the same time allowing the Mavericks to profit from the sale.

In some cases, the sports teams themselves are moving onto the blockchain.

The tokenized sports exchange offers sports teams the ability to create fan tokens, allowing fans to purchase a part of their favorite teams on Socios.com. Owners of fan tokens can vote on key decisions affecting clubs while also gaining access to VIP rewards, promotions, and other unique experiences.

Italian team Juventus FC was the first to produce a fan token on the Chiliz platform in 2019. Since then, several soccer and e-sports teams have held Fan Token Offerings, including UEFA Cup winners FC Barcelona and Paris Saint-Germain FC. 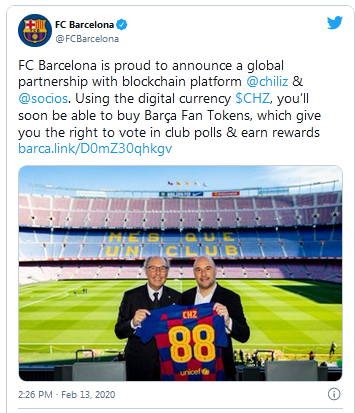 Presently, the global sports sponsorship market is expected to reach almost $90 billion by 2027. As the sports industry embraces cryptocurrencies and blockchain technology, this figure could rise exponentially in the coming years.