For those who follow me here, you know I have mostly been right on the money when it comes to forecasting where would top and bottom using the Elliott Wave Principle (EWP) combined with technical analysis. A quick trip down memory lane: This is what I had forecasted

“I prefer this [red intermediate] wave-iv to bottom at around $29K +/-1K over the next one to two weeks before wave-v to new all-time highs kicks in. It is most likely to be around $50-60K to complete an even larger 3rd wave (major-3). Then, the next 4th wave (major-4) should occur, etc. I do not view the rally since 2018 complete until we see at least two more, even larger rallies, from that major-4 low with six-digit upside targets.”

Bitcoin bottomed Jan. 22 at $28,817 for intermediate wave-iv and topped Feb. 21 at $58,445 for most likely, major wave-3, and major wave-4 is now under way. You can read my previous and subsequent article to ascertain that EWP and technical analysis combined. It is one of the most accurate and reliable ways to forecast financial assets, like Bitcoin, that one can use to bank on.

In the short-term, Bitcoin still can rally one more time to the low $60,000s, I would like to focus on the bigger picture using the monthly chart. See Figure 1 below.

As you can see, BTC reached each of my Fibonacci- and EWP-based target zones, which I have shared with you, for (red) wave-iii, iv, and v. It followed the anticipated (red) path well. Now, I expect the black trail to unfold. Although I am always wrong till proven right by Mr. Market, given that the anticipated initial targets were hit, I must assume the black path will be correct. 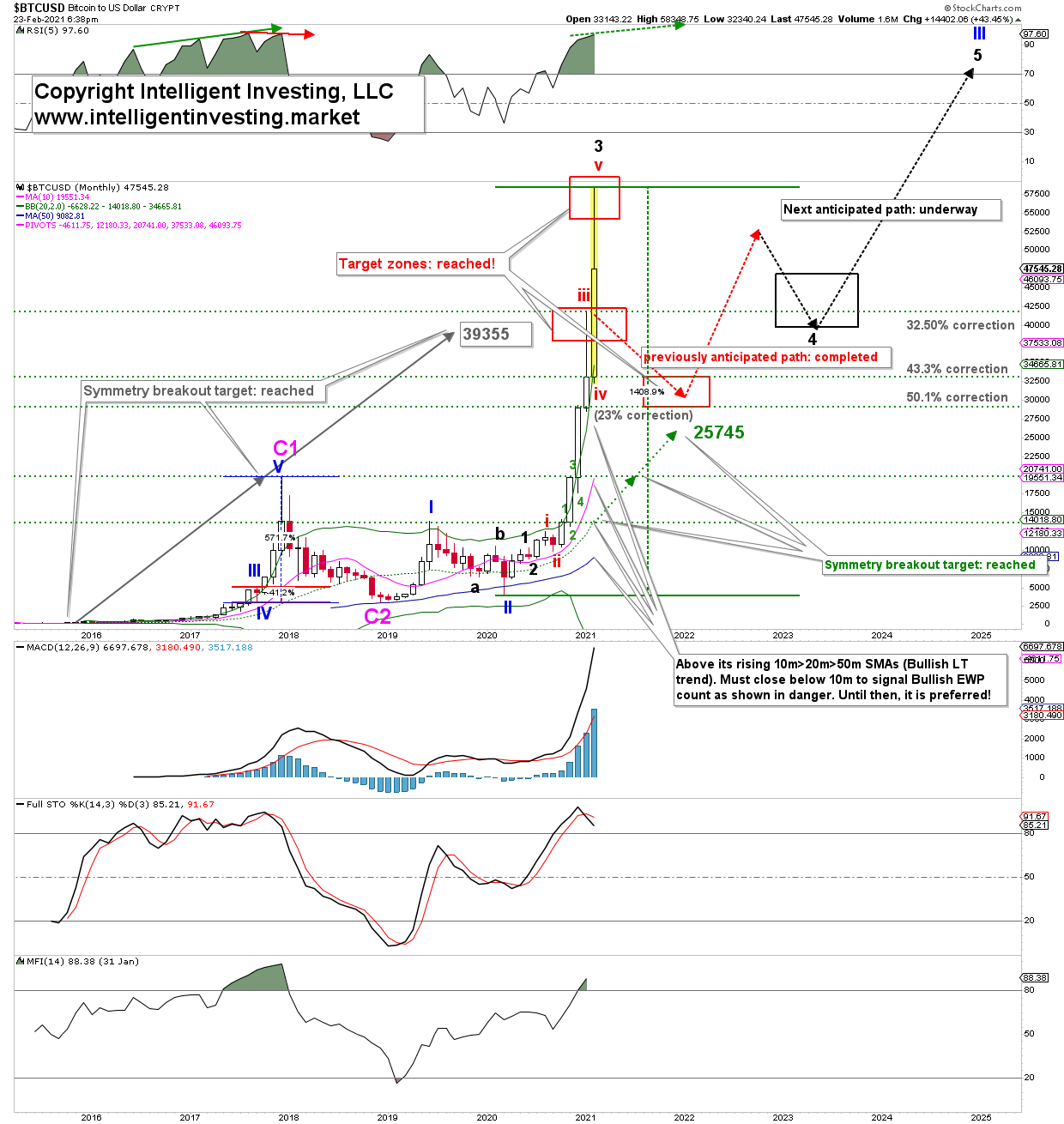 But let us first go back to 2017 as we can always learn from past patterns. In September 2017, BTC corrected over 40% for a (blue) Primary-IV wave and then rallied 570% (!) for a Primary-V wave before topping out for a Cycle-1 wave. There was no negative divergence on the RSI5 indicator (solid green arrow) until later in the year (solid red arrow). The latter foretold a pending, large correction, as this is on the monthly timeframe. Besides, the price was above its rising 10-month Simple Moving Average (10m SMA), which, in turn, was above the rising 20m and 50m SMAs. Thus, we can learn that 4th waves can correct severely, but that the 5th wave will make up for it, and then some.

The current wave-degree is, in my opinion, similar. And at this moment, there is no negative divergence on the monthly RSI5 (dotted green arrow), while the price is above its rising 10m>20m>50m. Thus, the chart setup is similar between fall of 2017 and now: strongly suggesting more upside ahead.

Given that BTC is in its most substantial part of its rally: Primary-III of Cycle-3, I expect the correction to be preferably on the shallow side because in bull markets, the downside disappoints and upside surprises. The 2017 analog proves this point.

Bottom line: My forecasts for BTC have been correct over the last several months, and I now anticipate its most extensive haircut since the rally in March 2020 started. Ideally, it will go to around $32,000-$42,000. From there, I expect the next multi-month rally, which could carry BTC into the six digits.